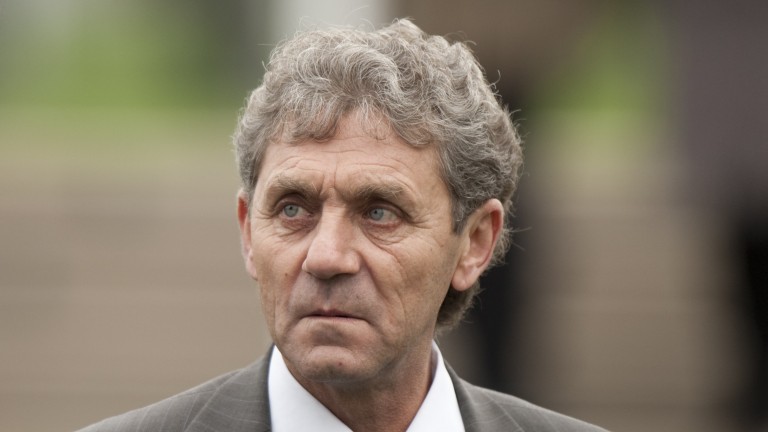 David Evans: successful with Choux in the Thirsk opener
Edward Whitaker
1 of 1
By Racing Post Staff UPDATED 6:53PM, MAY 15 2021

Two-year-old newcomer Choux rewarded punters behind an almighty gamble, with the David Evans-trained filly going from 40-1 into 100-30 in the space of just ten minutes before winning the opener at Thirsk.

Parading ahead of the 5f fillies' maiden at 12.30, the daughter of Exceed And Excel was rated a big outsider by the market before a notably late plunge.

What our post-race analysis said

Prominent, ducked right soon after start, pushed along and led 2f out, ridden and went clear 1f out, kept on

In the race, Choux raced prominently and powered away from her ten rivals in the final furlong for a comfortable success under Shane Kelly.

Paddy Power's spokesperson Paul Binfield said: "It was obviously a very well orchestrated gamble regarding the holding on until the betting show and then they went for it.

"However, it didn't really hurt us too much. We were happy enough with the horse winning the race."

Choux provided a 23rd course success for winning trainer Evans and a first winner for owners Chris Kiely Racing Limited from their first runner on the track.

It was also a 30th victory of a productive season for the Monmouthshire-based trainer, who landed the Group 3 Pavilion Stakes at Ascot with stable star Rohaan last month.

'My horse was certainly intimidated' – photo-finish drama as placings reversed

FIRST PUBLISHED 1:07PM, MAY 15 2021
It was obviously a very well orchestrated gamble regarding the holding on until the betting show and then they went for it