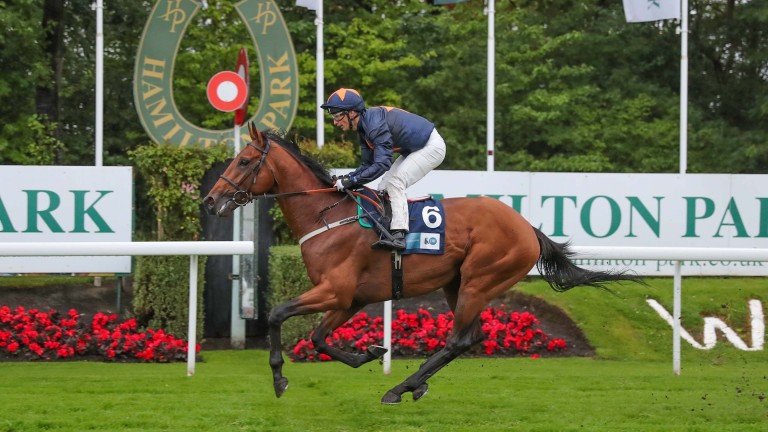 Sameem: his front-running style is well suited to the demands of Ripon
Grossick Photography
1 of 1
By Richard Birch 6:00PM, JUL 7 2020

Ripon is a track which produces more than its share of course specialists, and three of the eight-strong field – Sameem, Benadalid, and Mulligatawny – possess winning form at the North Yorkshire venue.

The four-year-old Sameem enjoyed a profitable campaign last year, which included a smooth two-and-a-half-length defeat of Mikmak over the course and distance in July.

His front-running style lends itself perfectly to this galloping track and, while 4lb higher in the weights now, he did follow up that win when landing the Listed Glasgow Stakes at Hamilton from Persian Moon.

Sameem was gelded over the winter, and could have further improvement in him this summer. If he gets rolling on the front end he could prove hard to peg back.

Benadalid, fourth behind Sameem at Ripon, could pose a bigger threat this time on the back of a last-time-out win at the track.

He has been put up 4lb for beating Hats Off To Larry by a length, which seems perfectly fair, and should enjoy the likely underfoot conditions.

Dark Jedi joined Tim Easterby this season on a favourable mark, and it didn’t take the trainer long to squeeze a win out of the four-year-old.

He ran behind Circus Maximus in the Listed Dee Stakes at Chester last season, and it was no surprise he was able to strike off 79 over 1m1f at Hamilton last month.

The runner-up Where’s Jeff is a strong stayer, yet Dark Jedi had little difficulty brushing him aside inside the final furlong. He competes under a 5lb penalty but is sure to have plenty of supporters once again.

James Tate, trainer of Sameem
He loves it at Ripon. He’s a winner there, and was just touched off on his only other run at the track. It’s the lowest-grade race he can run in, and I’m sure he’ll give a good account of himself.

Hesslewood (left): steps up in trip at Ripon
Martin Lynch

James Bethell, trainer of Hesslewood
I’ve been keen to run him over a mile and a quarter for some time. When he ran at Kempton over a mile last November it looked like a step up in trip would suit him. He ran very well on his reappearance when second at Beverley – it’s a shame the handicapper put him up 4lb for that. He seems in good form.

Chris Fairhurst, trainer of Benadalid
He’s gone up 4lb for his last win, which doesn’t seem too harsh. He loves the track, and is in very good condition. We’re hoping for another good run.