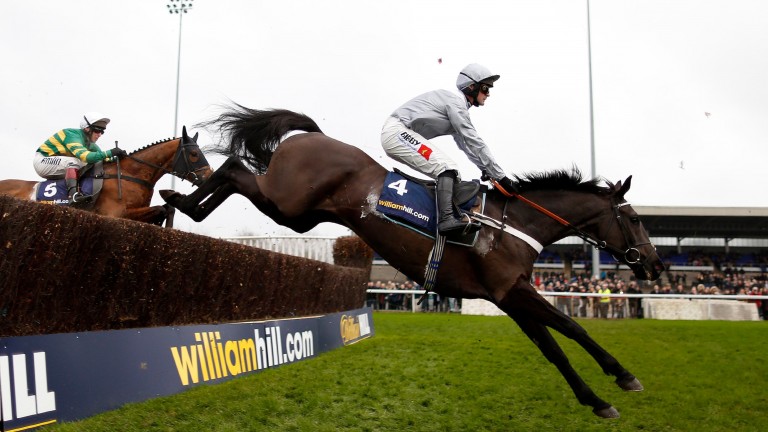 Vaniteux in vain pursuit of Ar Mad in the Wayward Lad at Kempton last season
Alan Crowhurst
1 of 1
By Bruce Jackson 4:02PM, JAN 13 2017

This four-runner race does not make the Scoop6 but could be the trappiest race to solve on the card as all connections raise questions about their runners.

Vaniteux has a habit of looking like a 2m4f contender when running over 2m and vice versa, while Vibrato Valtat is described as a hard horse to win with eight races on from his 2015 Haldon Gold Cup win.

Activial is the most recent winner but is having his first run for trainer Neil Mulholland, who is getting to know the seven-year-old after he was bought by Roger Brookhouse out of the Jared Sullivan's Potensis dispersal sale in the summer.

Quite By Chance has questions to answer after getting bogged down last time but has the plus of being in the hands of Colin Tizzard, who has made many Saturdays his stage this season.

Tizzard said: "He didn’t run his race on the heavy ground at Cheltenham last time, but up until then he had shown a level of form good enough to win a race like this."

Weights and measures will tell you he can't beat Vaniteux with the big turnaround in pounds in favour of the Nicky Henderson runner on their placings behind Sire De Grugy over 2m1f at Ascot.

"This looks an ideal race for him with so few opportunities but sticky ground wouldn't suit him."

Activial and Vibrato Valtat were stablemates and have competed at the highest level.

Mulholland said: "It's his first run for a while and he spent time in the summer at his owner's. He has schooled well but we will learn more about him and hopefully he will have a few bigger targets later in the year."

Vibrato Valtat fell in Vautour's Ryanair and has not quite got back to his best since while running in top races, leading Harry Derham, assistant to Nicholls, to say: "He’s a difficult horse to win with at the moment but we’ll keep trying to find the right race. The flat track and trip should suit him well."