Queally in his element over hurdles on Bobble Emerald 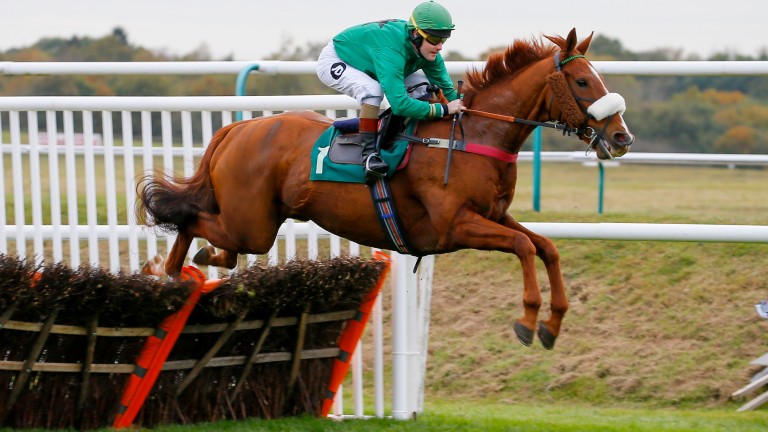 Tom Queally joked he "would not mind doing a Graham Lee in reverse" after repeating last year's debut win over jumps in the annual Flat jockeys' handicap hurdle with a pillar-to-post victory on favourite Bobble Emerald.

Frankel's rider, who revealed that all of the participants' riding fees, plus his own and trainer Martin Keighley's win percentages, would be going to the Freddy Tylicki fund, plainly loved the experience, and seemed more animated afterwards than for many much bigger wins.

He said: "I enjoyed it. You'd spend a lot of money on a day's hunting for probably less enjoyment, and this time we've turned it into a good cause. Hopefully a huge amount is being raised for Freddy."

Referring to Bobble Emerald's flier at the start, he added: "I think I got the [three-length] winning margin at the start, but that was the trainer's idea, not mine, and he also said to keep his confidence levels up."

Keighley, whose 2015 winner Solstice Star went on to run up a sequence, said: "He's some pilot. He's class isn't he. You wouldn't have known he was a Flat jockey."

He will be keen to secure his services again in 12 months' time, but will no doubt have plenty of competition as Queally was jocked up for half a dozen almost as soon as the entries appeared.

Queally, two out of two over hurdles now and happy to be in demand, joked: "I'd like to be as popular with Flat trainers next year as I am with trainers over the jumps!"

Prolific point-to-point winner Galros Lady looked to have got in off a very lenient mark and, despite racing from out of the handicap, won as she pleased.

Johns, who partnered the mare for David and Penny Pope of Oceans Racing, said: "If they were all like that this would be an easy job. She's a very good jumper. She concentrates and she's got a bit of scope too. I wouldn't mind riding her again."

Wayne Hutchinson won the bumper on Peggies Venture for Alan King and the 2m chase on Authorized Too for King's long-time assistant Noel Williams.

He recalled: "Noel and I joined the boss at the same time, 14 years ago, and came through the ranks together."

Peggies Venture was put in as a short-priced favourite last night, but Authorized Too was strongly supported from a morning 9-2 to 11-8.

Williams said: "He was seventh of seven first time over fences, but he wasn't beaten far and I was quietly confident. He's getting more manly."

You know it has been ridiculously dry when the word 'firm' appears in a going description over jumps at Lingfield.