Purton masterclass a thing of rare beauty at high velocity 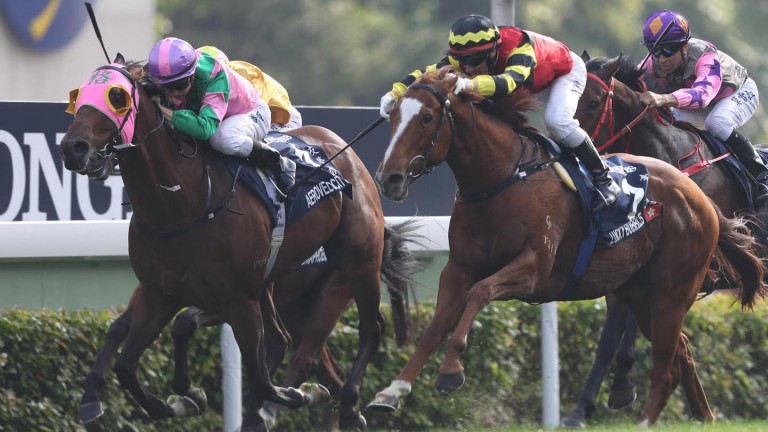 Going into International day all the talk was whether Ryan Moore could walk away with all four Group 1s, while the king of Hong Kong Joao Moreira also had a strong book of rides. But both were trumped by Zac Purton, who landed the Sprint with 2014 winner Aerovelocity and the Mile on Beauty Only.

Moore and Moreira took the day's other two features for Japan, but on a day when the home team were worried about having a single winner from the four feature events, it was Purton who expertly delivered the success they craved.

In the Sprint, in which the home team bagged the first four places, it was eight-year-old Aerovelocity who Purton guided to a second success in the world's most valuable six-furlong contest.

Two of the other four dual winners of the Sprint had races named after them on the undercard, and the course gift shop sold out of Aerovelocity's soft toy after the crowd favourite held off the late-charging market leader Lucky Bubbles.

"With 100 metres to go I was very confident of winning, but with 50 to go I could feel Lucky Bubbles starting to breathe down on me and I was looking at that post and just praying for it to come quicker and quicker," said Purton, who bounced out brilliantly, got the best of a scrap to hold his position and made his move upon straightening up.

"Out of all his wins this is probably the most satisfying because we've had some trouble with him and he's older now, so Paul [O'Sullivan, trainer] had to pull everything out of his trick bag to get him in the condition he is today, so the credit should go to him and his stable."

O'Sullivan added: "He's certainly a quirky horse, but he's the bravest I've ever put a saddle on. We'll party tonight."

Hong Kong horses also claimed the first four places in the Mile, and again it was Purton who was on board the best of them.

This time, instead of being in the box seat, he sat off a suicidal pace. Coming four wide and making headway around the bend, Beauty Only still had a lot of work to do on straightening up, but he galloped all the way to the line for a tenacious half-length success.

"I've finally worked out the way to ride him," said Purton. "You need to give him a chance early, and you know he's always going to give you a big sectional.

"The race was going to plan until the 700-metre marker, when Hughie [Bowman, rider of Helene Paragon] wanted to push off the fence and I wasn't travelling well enough to stop him. It just made me go a bit earlier than I'd have liked, but I knew he'd have a big set of lungs and he hung on for a solid performance."

Trainer Tony Cruz added: "From the day we bought him I've had very high expectations. Last year he wasn't that tuned up and this year he has improved. I believe we haven't seen the best of him yet."

Local superstar and the injury-plagued 2014 winner Able Friend was just found wanting for fitness and finished sixth, while the Aidan O'Brien-trained Cougar Mountain was tenth.

The Richard Fahey-trained Growl finished last in the Sprint and jockey Graham Lee said: "He's gone to the bend and he's gone, 'What's that?'"

FIRST PUBLISHED 1:54PM, DEC 11 2016
From the day we bought him I've had very high expectations. Last year he wasn't that tuned up and this year he's improved, I believe we haven't seen the best of him yet

Jim McGrath with three wagers for Sha Tin on Saturday