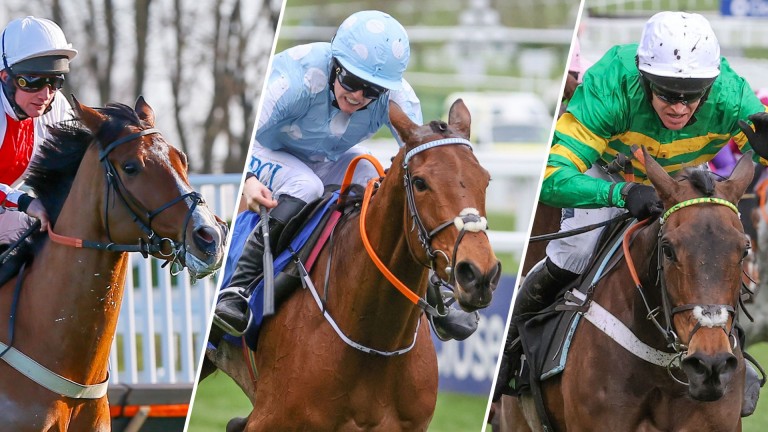 Goshen (left) will square off against Honeysuckle and Epatante in the Champion Hurdle
1 of 1
By David Jennings UPDATED 7:33PM, MAR 15 2021

Where you've got Goshen, you've got guaranteed entertainment. It's pure theatre. You cannot take your eyes off him for a second.

He was one slick leap away from being the most impressive winner of the Triumph Hurdle since Our Conor. Any sort of a leap would have done, in fact. Instead he got his left hind foot caught in the shoe on his left front foot and Jamie Moore was catapulted out of the saddle. Ecstasy to agony in seconds.

The Moore family must have felt like someone had punched them in the pit of their stomachs, but they're back and so too is Goshen – better than ever if his 22-length Kingwell win at Wincanton is anything to go by. 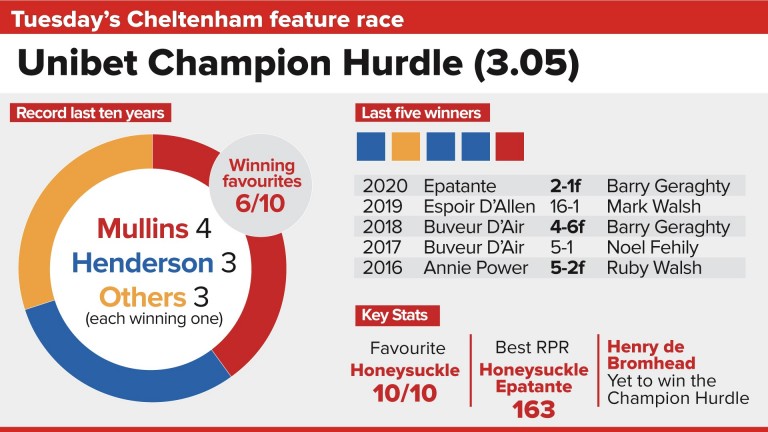 That was the Goshen we all knew and fell in love with. That was Goshen at his most glorious. That was the relentless-galloping Goshen who puts races to bed half a mile from home. If that is the Goshen we get here, compensation for last year's Triumph torment could be the story.

Gary Moore reports the flamboyant five-year-old to be in top shape, so the vibes are positive.

The trainer said: "It's all been very good since Wincanton. We're very much looking forward to it, we couldn't have him any better and soft ground would be fine for him. When he won the Kingwell he made it look so easy, so the only worry in my mind is that the others may have underachieved but he did nothing wrong.

"We've learned a bit more about how to ride him throughout the season. He's got to give plenty of weight away to some good mares, which is never easy, but he's a big strong horse so that may help him. I think he'll run a great race, I really do." 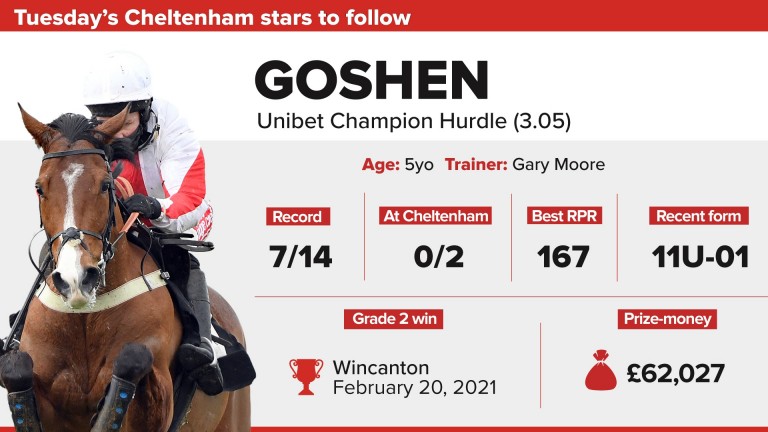 The problem with Goshen is his International Hurdle aberration last December and his lacklustre efforts in Flat handicaps in the autumn when beaten at 2-5 and evens. If that Goshen turns up here, then you can forget about compensation.

But perhaps he deserves the benefit of the doubt. After all, on five of his six starts over hurdles he has taken our breath away. More of the same here and it will be a sight for sore eyes. 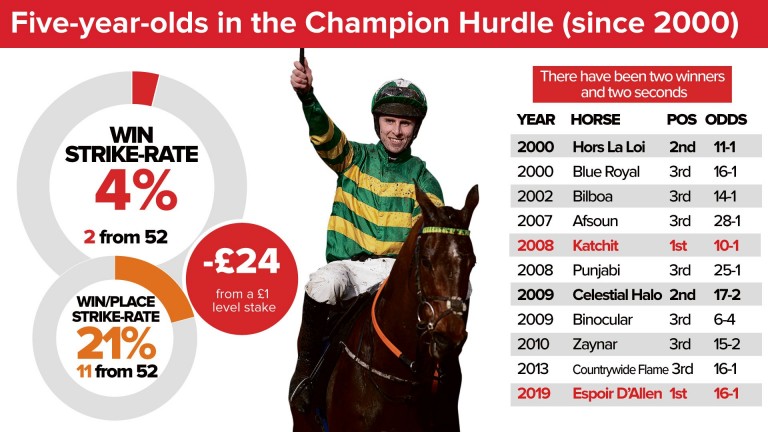 Foster hoping for magical start to new role with Abacadabras

Denise Foster has never had a runner at the Cheltenham Festival, never mind a winner, but in Abacadabras she has a slick, speedy two-miler who has the potential to open her account in one of the biggest events of them all.

Foster is widely known by her childhood nickname of Sneezy, although she is not quite sure where it originated. "I've been called Sneezy since I was knee high. Everyone calls me Sneezy. I even have letters delivered to my house which are addressed to Mrs Sneezy Foster," she explained.

The 67-year-old, who has taken over from Gordon Elliott at Cullentra Horse during his six-month supension, arrived on the Irish racing scene in the 1990s from a showjumping and eventing background.

She is the widow of Captain David Foster, an Irish army officer and international three-day event rider, tragically killed in a fall at a cross-country event at Rathmolyon in his native County Meath in 1998.

Initially training solely over jumps, Foster started training for the Flat in 2011, and enjoyed Listed success when Lily's Rainbow, who started off in handicaps with a rating of 67, won the Heritage Stakes over a mile at Navan in April 2016.

Over the last five seasons, before her new role at Cullentra House, Foster has sent out ten winners, six on the Flat and four under jumps rules, including Pike County who was bought by JP McManus to remain in her Enfield yard after winning a bumper at Ballinrobe in 2018.

Since taking the reins at Cullentra, Foster has sent out six winners from 24 runners. The most recent of which was Wall Of Fame in the concluding bumper at Punchestown on Monday.

Denise Foster, trainer of Abacadabras
The whole team here are delighted with him. He's going there in really good form. We didn't see the real Abacadabras at Christmas, but he took a step forward in the Irish Champion Hurdle. He's been to Cheltenham twice and run really well there twice, so I'd like to think that he will be heavily involved at the business end.

Henry de Bromhead, trainer of Aspire Tower and Honeysuckle
Honey seems great. She travelled over well and there isn't a bother on her. The rain on Sunday night was a bonus, but to be honest she seems fine on all sorts of ground. Once it's safe, jumping ground that's all that matters to her. She goes into the race in great shape. Robbie [Power] had a sit on Aspire Tower on Monday morning and he seemed very happy afterwards. He's in really good form too. 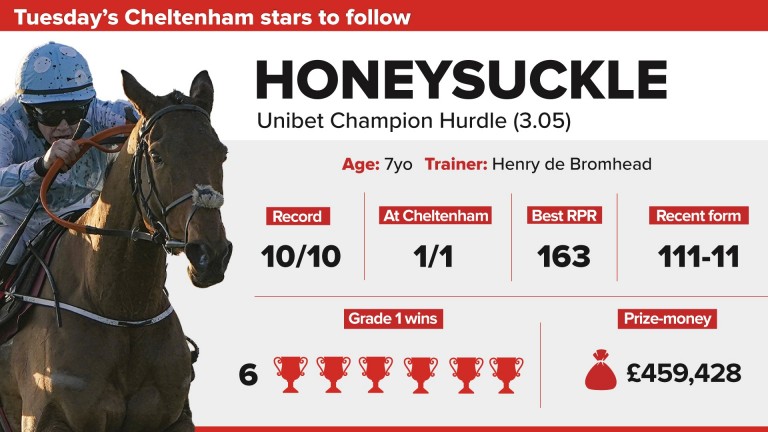 Willie Mullins, trainer of James Du Berlais, Saldier and Sharjah
The ground is drying out nicely for Sharjah. With the strong pace up front, he could be landing on tired horses in the last couple of furlongs. He ran well in this race last year and must have a great chance this time round. James Du Berlais was primarily bought to go novice chasing next season. However, on his French form and rating he has a chance of getting into the first four here. Saldier has still not returned to his best form but has been trained specially for this. The likely strong early pace will suit and a change of tactics from Leopardstown last time might also help.

Hughie Morrison, trainer of Not So Sleepy
I think Honeysuckle will be very difficult to beat. If we hadn't unseated and then wiped out Silver Streak, who knows what might have happened against Epatante at Newcastle. Last year Not So Sleepy had been on the go a long time, while he's very hard on himself at home. We got tempted by the Betfair Hurdle last year but this year he wasn't the same horse as he had been at Ascot. That made us determined to leave him quiet for six weeks and then train him for this race. If he turns up in the right mood I think he has a chance of being third or fourth.

Evan Williams, trainer of Silver Streak
I'm delighted with him. It's no secret the rain they've had won't be any help to us. But that's the reality. He's in great order but we could have done without the rain. We'll take what we're given. It's dreadfully unlucky on Adam [Wedge] but we are fortunate that Thomas [O'Brien] has got a good record on the horse. 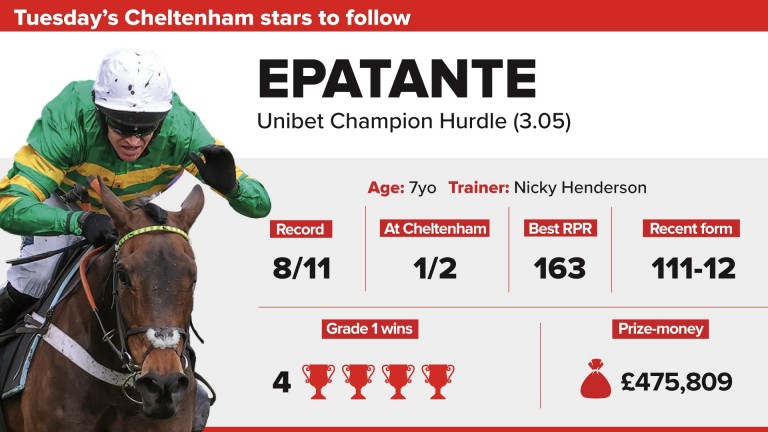 Nicky Henderson, trainer of Epatante
Everything's gone well. We have to put a line through the Christmas Hurdle because if she runs to that she isn't going to win here. It wasn't the same mare who won the Christmas Hurdle the previous year, or the Champion Hurdle or Fighting Fifth. I was rather hoping for better ground than we're going to get now and there's no doubt it's a much stronger heat than last year. I'm never confident, but after this morning [Altior's setback] I wouldn't be confident about anything.

Alastair Down: the theatre may be empty but let's cast aside gloom and relish the spectacle (Members' Club)

1.20 Cheltenham: will the cream rise to the top in smallest Supreme field in modern history?

1.55 Cheltenham: dangers await but here's why Shishkin should have all bases covered in Arkle

2.30 Cheltenham: Happygolucky has 'outstanding chance' to bring Bass and Bailey glory in Ultima

A champion on the wane and a challenger ready to reign: who wins the big clash? (Members' Club)

3.40 Cheltenham: can Concertista take her place among greats in quality running? 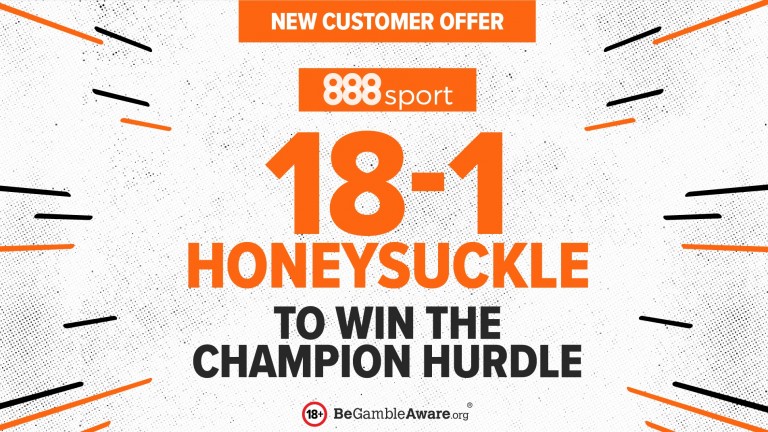 888 Sport have enhanced Honeysuckle to 18-1 to win the Champion Hurdle for new customers. Sign up using promo code 888ODDS. Qualifying bet must be placed at the normal odds. Max bet £5. Extra winnings paid in Free Bets and added within 72 hours of qualifying bet settlement. Free bet stakes not incldued in bet returns. Free bets expire 7 days after credit. The offer may not be combined with any other offer. T&Cs apply. Sign up here

FIRST PUBLISHED 6:00PM, MAR 15 2021
Honey seems great. She travelled over well and there isn't a bother on her