Punting pointers and trainer insight for the Mersey Novices' Hurdle 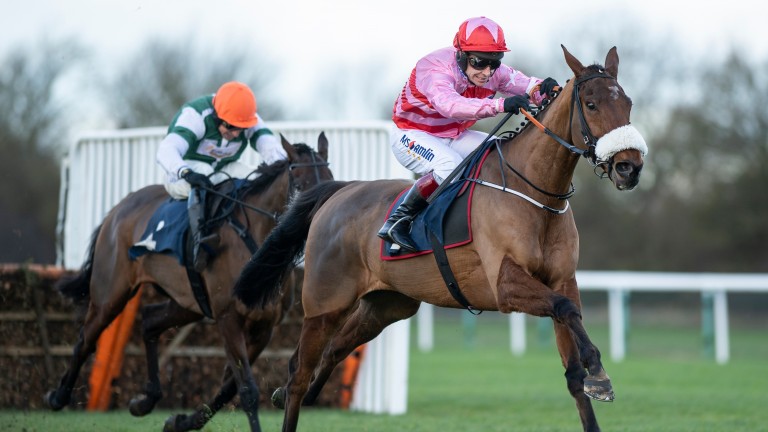 What should we make of Cheltenham form?

Brewin'upastorm just shadedit in the betting on Friday at 5-2, with Angels Breath a 3-1 shot. That may seem too close based on their Cheltenham exploitsas Angels Breath finished 22 lengths behind Supreme winner Klassical Dream while Brewin'upastorm got to within five and three-quarter lengths of Ballymore winner City Island.

However,Angels Breath had arrived at the festival with the loftier reputation and was sent off at 6-1 for what looked beforehand a red-hot Supreme, and trainer Nicky Henderson is hopeful a step up in trip to 2m4f can show him in a better light than that effort.

The Big Bite, 12th in the Supreme, also lines up in a race in which 14 of the past 20 winners had run at the Cheltenham Festival, with eight of them finishing in the first four in the Ballymore.

What about those whoskipped the festival?

Bouggler and Finian's Oscar are theonly twohorses in the last ten years to win this having not made an appearance at the Cheltenham Festival– but then we have a lesser standard of festival runner on display this year.

High-class types such asPeddlers Cross, Simonsig, Lac Fontana and Yorkhill doubled up, while Spirit Sonand Black Op were second at Cheltenham and Nichols Canyon was third.

Ubak was the only horse to win this having finished out of the places at the festival, which should give those coming here from elsewhere hope as none of thosewhoarrivevia Cheltenham made the first three there.

Among those who missed the festival, One For Rosie has a five-length defeat of Glen Forsa in the form book, while Kateson finished closer to Champ in the Challow than Brewin'upastorm managed in the Ballymore. Umbrigado comes in unbeaten over hurdles and Chosen Mate is two from three in this sphere.

KEYSTAT
Eight of the last ten winners were sent off 9-2 or shorter, with six winning favourites in that time– but just two at odds-on. The two bigger priced winners were 16-1 and 22-1.

Nicky Henderson, trainer ofAngels Breath
I've always liked the horse and I think the step up to two and a half should suit him.

Olly Murphy, trainer of Brewin'upastorm
He's in good form. The two and a half miles on a flat track should suit him and the slow ground won't bother him. I'm really looking forward to running him.

Gordon Elliott, trainer of Chosen Mate
He's going up in trip and this will definitely be his biggest test to date. Both his wins were over two miles so we'll have to see how he fares. He's in good form though.

Nicky Martin, trainer of Colonel Custard
He's never been two miles four before and we went for this race as we didn't think it would rain as much as it has. I don't think the distance will be a problem and he'll relish the wet conditions.

Tom Lacey, trainer of Kateson
He’ll love the rain and he’s a fresh horse having missed Cheltenham. I’d like to think there’s a big run in him. He seems very well at home. Sean [Bowen] rode him in a bumper at Carlisle in 2017.

Nigel Twiston-Davies, trainer of One For Rosie
He was very goodin the EBF Final and will hopefully go close. He's a very good horse.

Joe Tizzard, assistant to Colin Tizzard, trainer of Reserve Tank
He's a progressive horse and deserves to take his chance. He got up nicely at Kempton and will be a lovely horse for next season over fences.

Tom George, trainer of The Big Bite
He probably just needed to step up in trip. The ground was a bit soft for him at Cheltenham, so hopefully it dries up a bit. The track will probably suit as he’s run well around the likes of Haydock.

David Pipe, trainer of Umbrigado
It's a big step up in class but he's done nothing wrong and we've always liked him. The step up in trip should also suit, and we'll find out a lot more about him.

A few of these didn't run up to their best on their latest starts butBrewin'upastormis highly respected on his Ballymore fourth.

For the must-have offers for the Aintree festival tap the free bets button on the racecard page or searchracingpost.com/free-bets

FIRST PUBLISHED 6:00PM, APR 5 2019
The two and a half miles on a flat track should suit him and the slow ground won't bother him. I'm really looking forward to running him