Punting angles and trainer views for the Sprint Trophy 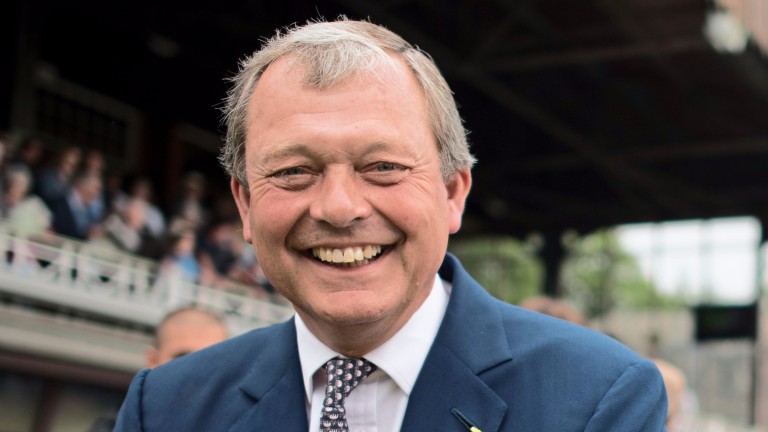 William Haggas: the trainer will be represented by Raucous in the Coral Sprint Trophy Handicap
Edward Whitaker
1 of 1
By James Burn 6:00PM, OCT 13 2017

It is perhaps fitting York – acclaimed for its prize-money this season – ends its year with a £100,000 handicap, which if recent history is anything to go on might not be as tricky to solve as first appears.

Two favourites have struck since 2007 and there have also been 7-1 and 13-2 winners in that period, when the biggest-priced scorers have returned at 14-1, albeit four times.

David O'Meara will still be walking on cloud nine after Grade 1 success in America last week and won this race last year. He runs Edward Lewis, but Al Qahwa – the mount of stable jockey Danny Tudhope – could be the one, having landed a course-and-distance handicap in May and finished a fine second in a hot race on Irish Champions Weekend last time.

Spring to bounce on?

Spring Loaded has been raised 9lb to 101 for winning the Portland, but that is still 4lb below his all-weather rating, giving trainer Paul D'Arcy optimism of following up.

Much is made of William Haggas's love affair with the Knavesmire and no trainer has saddled more winners at the track this term than the Newmarket operator, who is represented by Raucous, placed in a Group 3 this time last year, but yet to really fire in 2017.

Dean Ivory, trainer of Stake Acclaim
He runs races every time and I've been thrilled with his form. He wants soft ground and I don't know whether stall one will be ideal, we'll have to see how it pans out. I guess his last run at Haydock was a career-best and he's certainly on form. He's very well and bounces back; he's the type of horse you can run quick. He's tough as old boots.

Paul D'Arcy, trainer of Spring Loaded
He's very well and has come out of the Portland fresh and well. He's rated 105 on the all-weather so I think he's still got a bit in hand and I think six is his trip; he's won all of his other races over six. We've not got a bad draw in stall 13, the ground looks like it's drying out by the minute and I'm very hopeful.

Paul Cole, trainer of Upstaging
The horse is absolutely fine, but I'm a bit concerned about the draw [stall 20]. That'll probably work against him and I'd like him drawn in the middle. York is a funny track and you never know how your horse is going to run, but he's a good horse and got a bit interfered with in the Stewards' Cup. He was cantering and it just cost him; he'll run well.

Ruth Carr, trainer of Pipers Note
He has done us proud this year and rarely runs a bad race. He was unlucky to come up against a group performer in the Great St Wilfrid at Ripon. He was fourth in this last year and the ground continuing to dry out will suit him.

Mick Appleby, trainer of Kickboxer
The ground at Haydock last time was absolutely bottomless – almost unraceable – and you can put a line through that. He wants a bit of cut, but he doesn't want that. He's in good order and on his best form has a squeak.

William Haggas, trainer of Raucous
We've taken everything off him, so we'll see what happens. He doesn't seem to be running very fast with it all on so we'll try a different tack. He's very well, we've just trained him a bit differently the last two or three weeks, so we'll see if it's made any difference.

Robert Cowell, trainer of Outback Traveller
We tried a visor last time, but it wasn't the visor that didn't work, it was just way too soft for him. The ground should be better and he seems in good form at home. He's right down the bottom of the handicap, which is great and it's a race worth running in so hopefully he can run well.

FIRST PUBLISHED 6:00PM, OCT 13 2017
He's very well, we've just trained him a bit differently the last two or three weeks, so we'll see if it's made any difference