If the 1,000 Guineas was still run on a Thursday Laurens might have been hailed the winner instead of finishing second as the baking weekend weather went against the North Yorkshire runner.

Last year's Fillies' Mile winner made a courageous attempt to repeat the front-running tactics that had served her so well that day, but she had no answer when Billesdon Brook swept by in the Dip and went down by a length and three-quarters.

Karl Burke's first runner in the race is now likely to step up in trip for the Prix de Diane at Chantilly next month, rather than reoppose some of the principals from here in the Tattersalls Irish 1,000 Guineas on May 27.

Watch Billesdon Brook spring a 66-1 surprise in the 1,000 Guineas

Burke said: "If the extra 16mm of rain that was forecast six days ago had arrived I think it could have been ours. We can't do anything about that. Hats off to the winner but out of all the ones I thought might beat us, I didn't put her in to be fair. 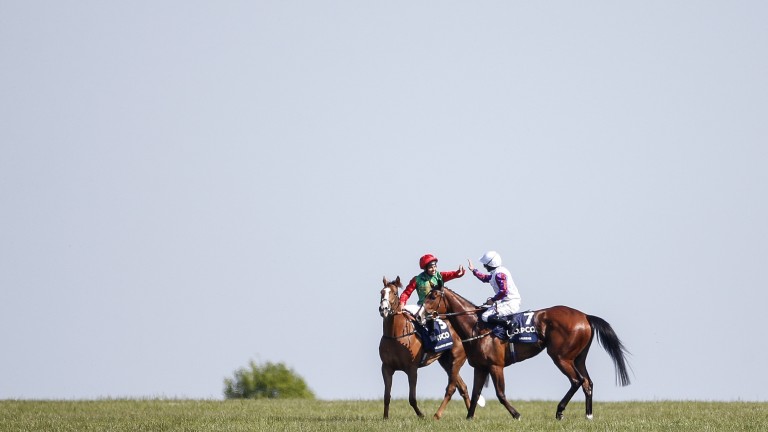 "Make no mistake, Laurens is a very high-class filly. I'm pretty sure we'll take her straight to the French Oaks after that, where the extra two and a half furlongs will suit her well and she'd be only half-speeding in the first part of the race."

Rider PJ McDonald, for whom this was a first Newmarket Classic ride, said: “She's run an absolute blinder. It was just that faster ground that caught her out. We just needed a little bit of cut.

"She travelled beautifully but just when I let her down she was feeling that ground a bit and changed her legs a couple of times. She has a great attitude and a will to win. She put her head down and galloped right out. There are plenty of big days in her.”

Aidan O'Brien had four runners in a bid to win the 1,000 Guineas for a third consecutive year and was not too downhearted with the performance of first string Happily, the 11-4 favourite, who looked dangerous at the Bushes but could stay on at just the one pace to finish half a length behind Laurens in third.

He said: "We've no excuses. She was a bit laidback on her first run of the year and we'll maybe go to the Irish 1,000 Guineas after that.

Godolphin's Wild Illusion was fourth and jockey James Doyle said: "I’m pretty pleased with her. She coped with the ground pretty well and is crying out for a bit more distance."

FIRST PUBLISHED 5:41PM, MAY 10 2018
If the extra 16mm of rain that was forecast six days ago had arrived I think it could have been ours