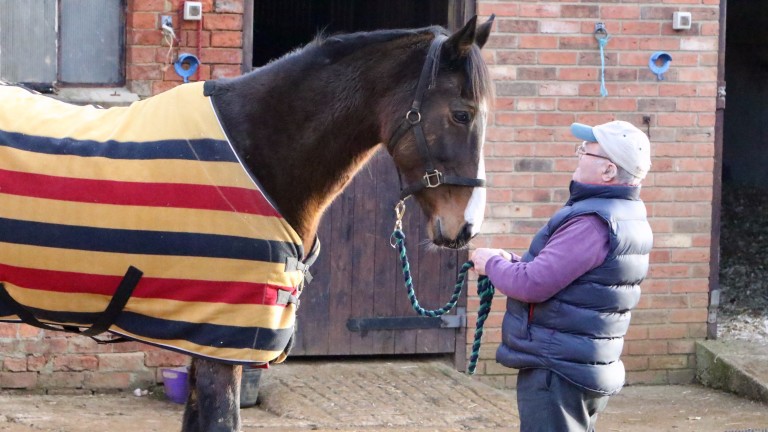 Tight Squeeze, the aptly named mare who had to be rescued by firefighters after getting stuck in a muddy brook, is bucking and kicking again and showing no ill effects from the weekend's ordeal.

The former Peter Hiatt-trained mare, who won 14 of her 87 races and is now 20, was enjoying retirement with her owner-breeder Chuck Harrison at Wigginton, near Banbury, when she got into trouble after sliding down a bank into a ditch.

Harrison said: "We had about 15 people here helping to get her out, with the animal rescue team joined by local firefighters, and they were absolutely brilliant.

"It must have taken a good hour and a half, as they had to dig the bank out, and she had a little thrash around every now and again, but she's ever such a tough old bird and she's already got over it. When I turned her out for a couple of hours in the sunshine on Monday she was jumping and kicking as if nothing had ever happened."

He added: "We've had horses in that field for 25 years and never had one go in before. It might never happen in another 25 years, but I'm taking no chances and have fenced it off already."

Tight Squeeze's tight squeeze made the national news, with The Times, BBC and ITV among the organisations to pick up on her rescue.

He said: "She was a lovely mare and very game. We had her from start to finish and she was definitely one of our better ones.

"She was from a very late-maturing family, but she was effective on the all-weather and on grass and she won about as many races as any of ours have won, although we've had a few get to 14 or 15. She was a nice mare to train and I'm very pleased she's all right."

FIRST PUBLISHED 12:58PM, JAN 3 2017
She's ever such a tough old bird and when I turned her out for a couple of hours in the sunshine on Monday she was jumping and kicking as if nothing had ever happened