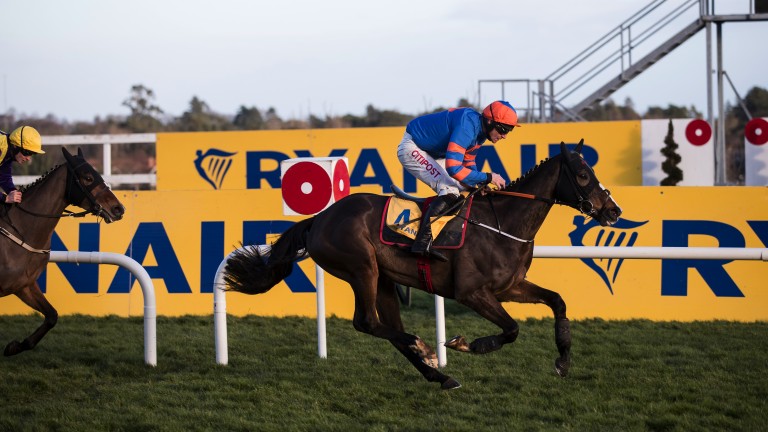 Mick Jazz: the Ryanair Hurdle winner is stepping down in grade on Saturday
Patrick McCann (racingpost.com/photos)
1 of 1
By Tony O'Hehir UPDATED 7:15PM, FEB 16 2018

After competing at the top level on his last two starts, Mick Jazz drops in grade against six rivals as he seeks a fourth win over hurdles.

The Gordon Elliott-trained seven-year-old benefited from Faugheen's dismal performance in the Ryanair Hurdle at Leopardstown in December when landing that Grade 1 event before finishing third behind Supasundae and Faugheen in the Irish Champion Hurdle.

Elliott was successful with Tombstone a year ago while Davy Russell won back-to-back runnings on Solwhit in 2009 and Luska Lad in 2010.

Abbyssial, a Grade 1 winner four years ago, will be making his first appearance since the 2015 Cheltenham Festival, while Willie Mullins is also represented by the versatile Lagostovegas who is returning from a break.

Gordon Elliott, trainer of Mick Jazz
He seems in good order and his last two runs in Grade 1 company were very good. The ground should be fine for him and he should have a very good chance.

Jessica Harrington, trainer of Forge Meadow
She's in great shape. She has a 5lb penalty for her Grade 2 win last season which doesn't help, but she's run well on her last two starts and should run her race again and, hopefully, finish in the money.

Lagostovegas is coming back from a break and is in good form. The concern is the ground. She has won on heavy but we think she is better when conditions are less testing than they will be today.

Abbyssial has been off the track since the 2015 Cheltenham Festival and while he was a Grade winner at Punchestown the previous year it is a big ask for him after such a long absence. A longer trip would suit him better and we're just hoping he runs well and comes out of the race sound.

Henry de Bromhead, trainer of Arcenfete and Identity Thief
Arcenfete struggled a bit at Naas on his first start for us, while Identity Thief was returning from a long absence when he ran in the Irish Champion Hurdle. We hope and think they should improve from their last runs.

FIRST PUBLISHED 6:00PM, FEB 16 2018
He seems in good order and his last two runs in Grade 1 company were very good. The ground should be fine for him and he should have a good chance