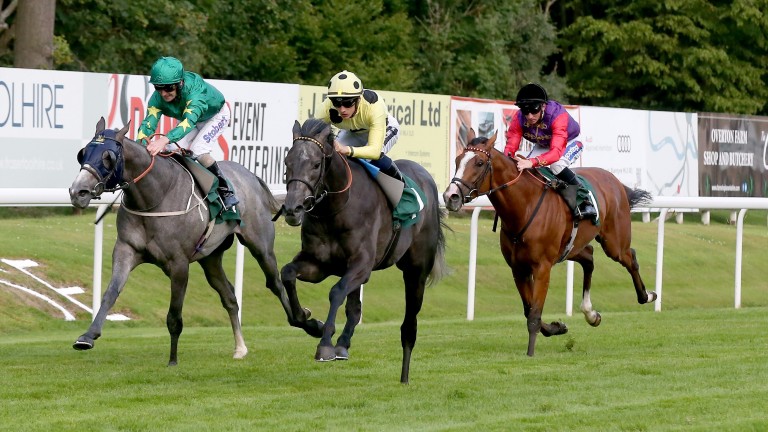 Defoe emulated his illustrious former stablemate Postponed with a stamina-packed performance to justify favouritism in the £42,000 Glasgow Stakes at Hamilton on Friday.

The Roger Varian-trained colt had to work hard to catch the front-running Frankuus who set a scorching pace in the Listed event.

He got to grips with Frankuus inside the final furlong before forging clear for an ultimately comfortable one and a half length victory.

Jockey Harry Bentley said: “Frankuus set a strong gallop in the first-time blinkers but that probably suited my horse and I was not too worried.

“He is a lovely horse and is all about momentum. He will be even better with more cut in the ground and is moving through the ranks well. I am sure he is ready for the step up to Group company now and he will stay further. I am confident one mile six furlongs would not be a problem.

Varian’s representative Howard Moss added: “The St Leger has been mentioned as a possibility for this horse and he’ll certainly be better over one and a half miles plus on softer ground.

“He was a bit lazy today but I always thought he was going to peg back the leader and he did it well in the end.”

Earlier in the evening, Danny Tudhope made the most of a late call up to seize the £34,000 Scottish Stewards’ Cup aboard Classic Seniority.

Original pilot Barry McHugh was replaced by Tudhope who was due to partner Al Qawha in the six-furlong handicap.

“We were delighted when Danny became available when his horse was pulled out as he usually rides our horse. It’s unfortunate for Barry but he understands,” said trainer Marjorie Fife’s son Tom.

Classic Seniority, a 16-1 chance, came with a late rattle to lead inside the final 100 yards and prove one and a quarter lengths too good for Dark Defender.

The five-year-old is earmarked for the ladies race at Ascot a week tomorrow, a race in which he finished fourth last hyear. He will then go for the Stewards’ Cup at Goodwood or the consolation race.

Tom Fife said: “He does well in these big handicaps and we have both him and Barracuda Boy entered at Goodwood. They will both run at Goodwood in whichever race they get in.

“We weren’t sure he would be suited by this track as he’s seemed to prefer galloping flat tracks like Ayr and Doncaster.

“He’s in great nick and will be ridden by Becky Smith at Ascot next week and will have a decent chance.”

FIRST PUBLISHED 9:29PM, JUL 21 2017
The St Leger has been mentioned as a possibility for this horse and he’ll certainly be better over one and a half miles plus on softer ground