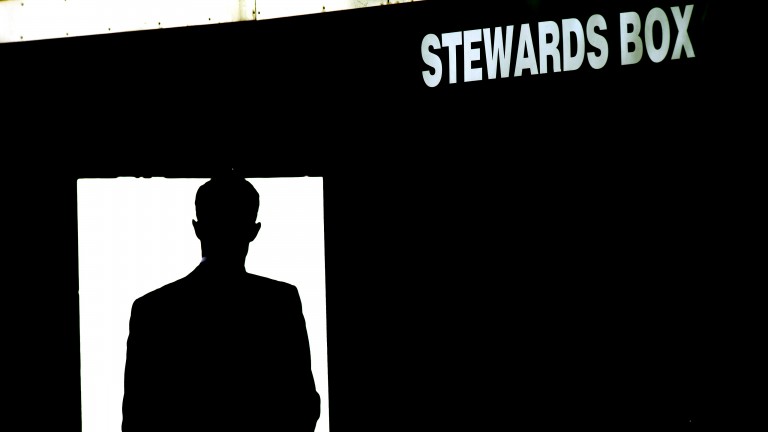 There has been a shake-up to the stewarding panel
Edward Whitaker / racingpost.com/photos
1 of 1
By Bill Barber UPDATED 8:40PM, AUG 29 2018

British racing's stewarding model is set for a major overhaul to help the sport fight the risk of corruption but not for the radical changes that had once been proposed.

The governing body's chief regulatory officer Brant Dunshea unveiled the new system on Wednesday saying it was an "exciting opportunity" for the sport.

However, while the new approach reduces the involvement of the volunteer honorary stewards it stops short of introducing the fully professional stewarding model which was proposed at the start of the process last year. 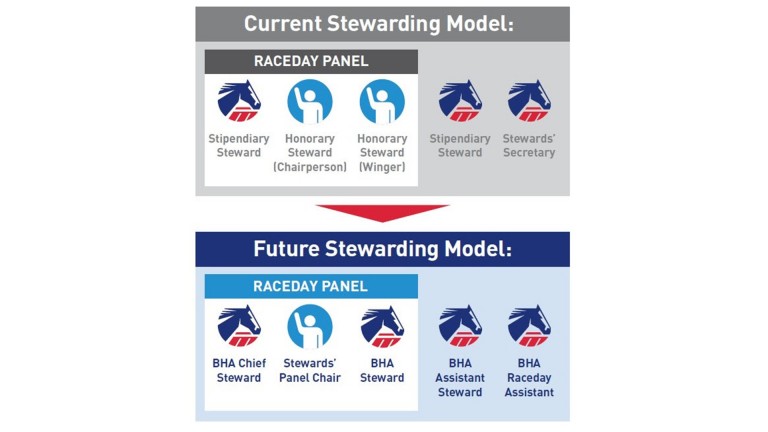 The existing system has two unpaid honorary stewards sitting on the raceday panel along with a professional stipendiary steward.

Under the 'one team' model to be introduced next year one honorary steward will remain as chair of the raceday panel but will be joined by two stewards employed by the BHA, including a chief steward who will have overall control of raceday functions.

They will be helped by a BHA assistant steward – an enhanced version of the current stewards' secretary – and the new position of BHA raceday assistant who will assist with various duties such as checking equipment.

Dunshea said the sport faced a number of challenges, adding: "Not only are we facing increased competition from other sports for support, publicity, sponsorship and investment, we are also at continuous risk from unscrupulous interests who seek to exploit and corrupt the sport for financial gain."

He said other sports such as athletics, boxing and cycling provided "very real and sobering evidence of the negative effect any perception of corruption, mismanagement or poor regulation can have on the popularity and reputation of those sports".

The "proliferation of offshore unregulated exchanges" had been identified as a high risk, Dunshea added, while he revealed the sport had carried out an integrity survey which had found non-triers were the main concern with 83 per cent of those asked citing horses underperforming for handicapping purposes as their main worry.

What is the role of the chief steward?
This will be a professional BHA employee with overall control of raceday functions, providing clear accountability and an escalation point for raceday decisions.

What is the role of the stewards' panel chair?
This will be a volunteer with responsibility for chairing stewards' inquiries and ensuring procedural fairness.

Dunshea said the new system would enable the raceday team "to scrutinise racing in a different way".

He said there would be more involvement from the BHA's team which analyses betting and form and that such issues would be handled differently under the new system.

Dunshea added: "Over time it will evolve and develop the skills of our current team to read a race differently, to analyse it differently and then subsequently scrutinise it in a different way."

When the BHA announced it was to review the stewarding system last year, Dunshea's predecessor Jamie Stier had initially said the governing body was looking to move to an all-professional model.

That provoked a backlash from honorary stewards and the wider sport and the BHA on Wednesday conceded they had been wrong to make that announcement.

Nevertheless the number of stewarding days for honorary stewards will roughly half to 1,500 days, although Dunshea said that did not necessarily mean the team of 90 volunteers would be reduced by the same amount.

"We've listened to the sport and agreed that evolution is better than a radical overhaul when it comes to modernising the way we officiate on racedays," Dunshea said.

He added: "I have had many conversations with many of our honorary cohort and had some really healthy and respectful discussions with them. I absolutely accept there has been some ill will along the way."

However he did not accept this represented a climbdown by the BHA. "This is not a fudge," Dunshea said, "we believe this reflects international best practice and bringing with us the very best elements of our history and current model."

The cost of the changes is expected to be £330,000 per annum, covering the cost of recruitment and retaining the new roles as well as additional training.

Dunshea concluded: "I am really excited about this, I think this is a fantastic opportunity. I think we are very well placed with this model."

The retention of a role for honorary stewards was welcomed by National Trainers Federation chief executive Rupert Arnold.

He added: "It is important for our members that stewards panels are seen to be impartial; volunteer stewards help to provide that independence.

"The BHA’s commitment to enhanced training should bring about greater consistency in decisions. That will be a step forward if it reduces the need for appeals of raceday decisions."

Those views were echoed by Professional Jockeys Association chief executive Paul Struthers who said his organisation had not been convinced by the need for change.

He added: "With no consultation on the options that were considered by the BHA board, we will need some time and further detail in order to fully consider the implications for our members.

"However, we are pleased that the BHA has been persuaded to reverse its original plan and are instead retaining honorary stewards.

"They bring a level of independence and objectivity that is valued by our members and, assuming the role of stewards panel chair is as important and influential as it should be, we welcome that decision."

The controversial Speculative Bid case was cited on Wednesday as one of the events which prompted the BHA to carry out its review of British racing's stewarding system.

Chief regulatory officer Brant Dunshea said there had been no final straw which prompted the review but instead an accumulation of issues such as wrong results being called by officials.

In the case of Speculative Bid, the BHA came under fire after the horse was declared by stewards both a runner and a non-runner when favourite for a major handicap at Ascot in 2015, costing on-course bookmakers thousands of pounds.

After an internal inquiry the BHA acknowledged a series of mistakes had been responsible for what chief executive Nick Rust described as "a regrettable episode".

Dunshea said: "I don't think there has been a specific incident in isolation but there have been a number of issues over the last few years which have led to us to conclude that there was a need for this process to commence.

"We have had judging issues obviously, we had the Speculative Bid issue some years ago, so there has been a range.

"It has been a combination of different things that meant we thought our structure needed to be looked at so we can mitigate the risk of things happening again in the future."

Volunteer stewards could be replaced by professionals under BHA proposals

FIRST PUBLISHED 1:10PM, AUG 29 2018
We are also at continuous risk from unscrupulous interests who seek to exploit and corrupt the sport for financial gain