'He was such fun' - racing pays tribute to Prince Philip, the Duke of Edinburgh 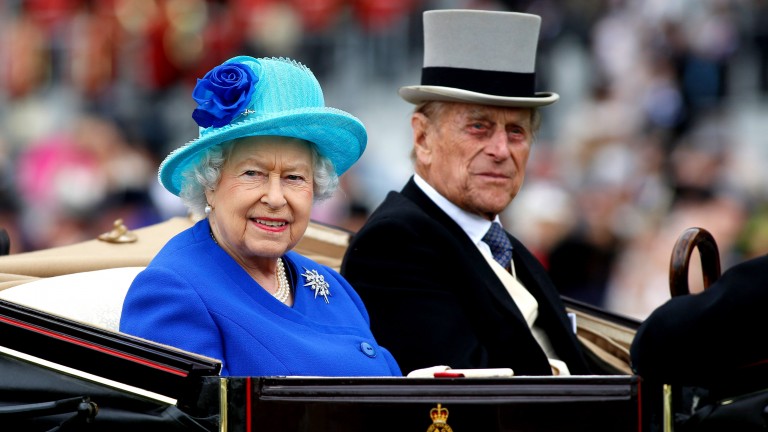 Prince Philip and the Queen in the carriage procession at Royal Ascot in 2016
Julian Herbert (Getty Images)
1 of 1
By Julian Muscat and Peter Scargill UPDATED 6:55PM, APR 9 2021

Racing united to pay its respects to Prince Philip, the Duke of Edinburgh, who died on Friday aged 99 and left his mark on the sport as consort to the Queen for seven decades.

Jockeys wore black armbands and flags were flown at half-mast at Aintree, where a two-minute silence was also held before racing for a man respected for his equestrian knowledge and skills, notably in polo and carriage driving.

An honorary member of the Jockey Club since 1947, Prince Philip never took an active role in racing as an owner but was a constant companion to the Queen at the Derby and Royal Ascot, where the Duke of Edinburgh Handicap was named after him.

Despite racing being the Queen's great passion, her racing and bloodstock adviser John Warren recalled Prince Philip taking a fulsome interest in the horses and breeding, as well as accompanying the Queen on numerous racing-related visits.

He said: "Prince Philip was a much greater support to the Queen in her racing endeavours than many people realise. His Royal Highness followed Her Majesty's involvement as an owner and breeder very closely, and willingly accompanied the Queen to the Derby and Royal Ascot every year. Not long ago Prince Philip attended a dress rehearsal for the Trooping of the Colour first thing in the morning but still travelled from London to Epsom to meet up with the Queen on Derby day.

"Prince Philip accompanied Her Majesty on so many trips, including to Kentucky where he was totally fascinated by all the stallions we saw. He also very much enjoyed spending a number of days with us when Her Majesty stayed with Alec Head at his Haras du Quesnay to view the French stallions in Normandy.

"Whenever I visited Sandringham to look at horses with the Queen, Prince Philip always asked on our return how the yearlings and foals were developing. He was also a man of impeccable manners. On one occasion I had a long phone call, at the end of which I realised he had been waiting patiently to say goodbye before he went back to London. And he became a rather animated 'armchair jockey' with great knowledge when watching some of the Queen's horses running on television. 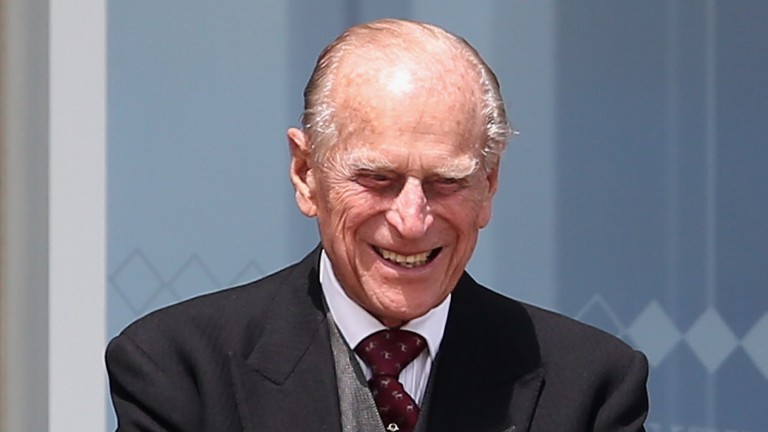 Prince Philip: a great horseman in his own right
Chris Jackson

"Of course, Prince Philip was a great horseman in his own right. Horses fascinated him as much as they do the Queen; they just have different perspectives. He loved polo and carriage driving, which he excelled at, while the Queen's love is obviously racing. In each, the horse is the common denominator."

Warren added: "On a personal level it is an extremely sad day for my wife and I. Carolyn knew Prince Philip all her life through her own father [the late Lord Carnarvon, the Queen's racing manager for more than 30 years]. He was so much fun and will be greatly missed."

The BHA and the Jockey Club confirmed the Randox Grand National and Saturday's other fixtures would go ahead as planned following Prince Philip's death, with black armbands to be worn, flags flown at half-mast and two-minute silences to take place. The Grand National will also be shown on the ITV main channel as scheduled, the broadcaster stated.

Sandy Dudgeon, senior steward of the Jockey Club, said: "We received the news of the Duke of Edinburgh's death with great sadness. On behalf of the Jockey Club, I would like to extend our deepest condolences to our patron, Her Majesty The Queen, and all members of the royal family."

BHA chair Annamarie Phelps said "a considerable debt of gratitude" was owed to Prince Philip after his years of public service, and added: "We offer our sincere condolences to Her Majesty The Queen and the royal family."

Prince Philip, who owned the winner of the 1968 Greyhound Derby, regularly accompanied the Queen in the first carriage of the royal procession at Royal Ascot, and presented her with the winning trophy following Estimate's 2012 Queen's Vase victory.

Sir Francis Brooke, the Queen's representative at Ascot, said: "We extend our deepest condolences to Her Majesty The Queen and the royal family at this time. We have very happy memories of His Royal Highness The Duke of Edinburgh at Ascot, where he accompanied Her Majesty The Queen on so many occasions and shared in her success." 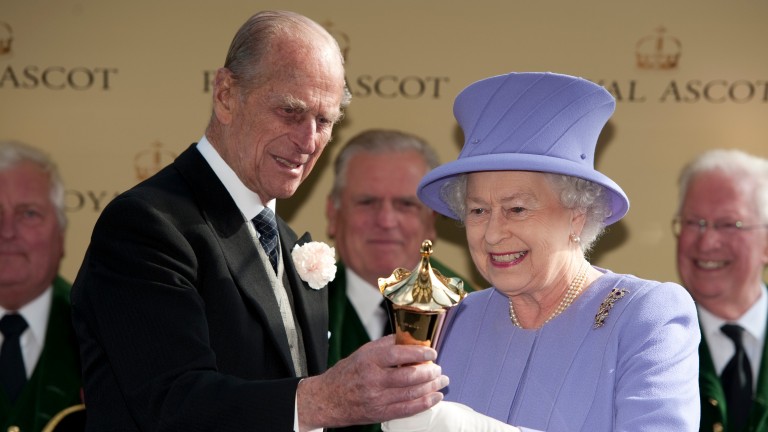 The Queen is presented with the Queen's Vase by the Duke Of Edinburgh after Estimate's win in 2012
Edward Whitaker (racingpost.com/photos)

Numerous racecourses, representative bodies and politicians with links to racing expressed their sorrow at Prince Philip's death, while Nicky Henderson, a long-standing trainer for the Queen, described him as a "remarkable man".

"This is obviously a very sad day," Henderson said. "The Duke of Edinburgh was a remarkable man. He was by Her Majesty's side and supported her for all those years. He was a delightful man to be around. I have to admit that racing was not his favourite pastime, although he greatly enjoyed many other equine activities.

"More than anything, he served the Queen and country with incredible dedication and loyalty. I think he deserves, and we should all be saying, an enormous thank you to him."

Sir Anthony McCoy, who was knighted in 2016 for services to horseracing, highlighted Estimate's 2012 Royal Ascot win and Prince Philip's horsemanship in his tribute.

"First and foremost my deepest condolences to Her Majesty The Queen and the royal family," he said. "I was very lucky to spend time in his company at Windsor Castle. He was a very interesting man and interested man, a very good polo player in his younger days and really keen and good at carriage driving.

"I think a moment that really stands out for me in racing is when he presented Her Majesty The Queen with the Queen's Vase after Estimate won in 2012. I can remember thinking that was a pretty special moment for Her Majesty, but also for horseracing."

Prince Philip stepped down from royal engagements in 2017. Last month he left hospital after a month-long stay, during which time he underwent a procedure for a pre-existing heart condition.

His death was announced by the royal family in a statement, which said: "It is with deep sorrow that Her Majesty The Queen announces the death of her beloved husband, His Royal Highness The Prince Philip, Duke of Edinburgh.

"His Royal Highness passed away peacefully this morning at Windsor Castle. Further announcements will be made in due course.

"The royal family join with people around the world in mourning his loss."

Prince Philip and the Queen had four children, eight grandchildren and ten great-grandchildren.

FIRST PUBLISHED 12:12PM, APR 9 2021
He became a rather animated 'armchair jockey' with great knowledge when watching some of the Queen’s horses running on television

'They're chucking money away' - Andrew Mullen hits out at Ayr fixture scheduling Meet the new Quixall Crossett: the 105-race maiden still gunning for a win Bloodstock Review author warns code can only succeed if complaints are raised Shane Kelly cleared to return for Rohaan Group 1 ride after horrific fall 'The response has been phenomenal' – Doncaster stages autism-friendly raceday Pour La Victoire bows out with dream victory on same day bar opens in his honour