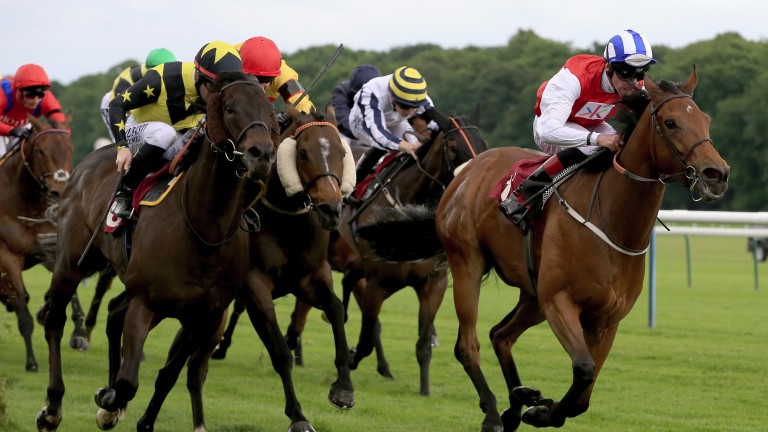 If only our managers were as dependable as my trainer. That may have been what one Chelsea director was thinking as he walked up Wembley Way yesterday afternoon.

Alan Spence would have been delighted to be looking forward to an FA Cup final and the chance of completing a double in Antonio Conte’s first season. But what about last year?

No trophies, no European qualification and a lowly tenth-place finish under Jose Mourinho and then Guus Hiddink.

Whereas Clive Cox is a man who delivers year after year. He prepared Profitable to land the Temple Stakes under Adam Kirby in Spence’s colours in 2016 and 12 months later he and the jockey repeated the feat for the same owner.

Priceless had finished fifth in the Palace House Stakes at Newmarket three weeks earlier but she’d raced much closer to a strong pace than those who beat her that day and she turned the tables here, hitting the front over a furlong out for a half-length defeat of Goldream.

“To have back-to-back winners in the race for the same owner is very satisfying,” Cox said. “He is at Wembley today which is understandable, he has split loyalties. But he’s a great man and he’s had horses with me for about 15 years now.”

Profitable went on from success here to land the Group 1 King’s Stand Stakes at Royal Ascot and Priceless is a best-priced 16-1 with Coral to emulate that feat next month.

“That was first class,” Cox said. “It was a really pleasing performance. I didn’t expect her to come to the boil as readily as she has this year.

“She is maturing into a really strong filly. She’s still getting better and she has taken a step up here. In her younger days she won a maiden here and was very green. The next year she was headstrong, we were trying to get further with her but dropping down to five furlongs has been the key.

“I have a great team back home and all credit to Kevin Harris, who rides her and Harry Angel.”

Goldream had been two places ahead of Priceless at Newmarket and part-owner Jeff Sargent felt the eight-year-old might have confirmed his superiority with a better start.

“He just missed the break sightly,” he said. “Otherwise he could have won. He still beat some damn good horses and he’ll go straight for the King’s Stand.”

Diamond next for Reflection

The six-furlong Diamond Jubilee Stakes is the target for dual Group 1 winner Quiet Reflection, who was allowed to take her chance despite the quick ground and was rather taken off her feet on this drop to five furlongs.

She finished tenth of 12 under new jockey Martin Harley and trainer Karl Burke said: “I didn’t really want to run on that ground but I wanted to get a run into her – she’s ten kilos heavier than her racing weight of last year.

“Martin has looked after her and those animals go that stride quicker on that ground. She’s having a nice healthy blow. Martin’s words were ‘she still feels like a Group 1 horse to me’.”

FIRST PUBLISHED 4:16PM, MAY 27 2017
She is maturing into a really strong filly. She is still getting better and she has taken a step up here