Will Shan Blue's electric jumping be the difference in Scilly Isles Chase? 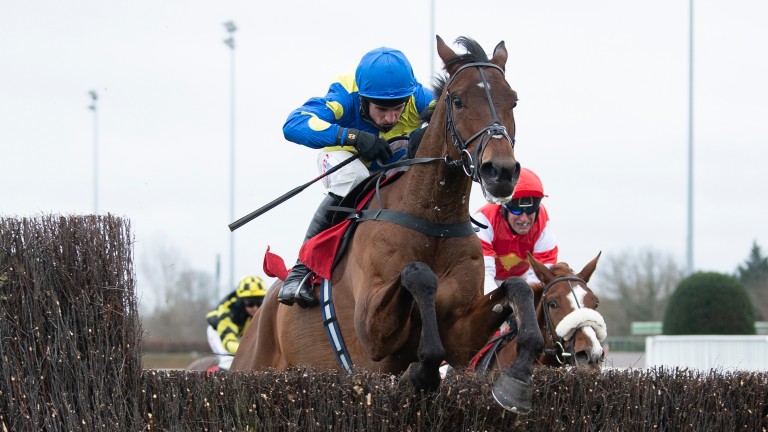 When looking at such a strong field for the Scilly Isles and noting that not one of them is single-figure odds for a Cheltenham novice chase, the temptation is to comment on the shadow Envoi Allen casts.

But it goes deeper than that. Ireland has dominated the Marsh since its inception, providing eight winners to two from Britain. What this wider trend has overshadowed is the Scilly Isles gradually pulling itself up from being the weak link among Britain's pre-Cheltenham Grade 1 novices to parity with the Henry VIII and Kauto Star.

At the start of the 2010s, mid-150s performances would regularly win the Scilly Isles. The last four winners have all broken the 160 mark. It is expected the winner here will do likewise, with so many already holding form within touching distance.

The form of the Henry VIII and Kauto Star is strongly represented. Hitman was second to Allmankind in the first named, while Shan Blue won the Kempton event. On RPRs Shan Blue's best performance was at Wetherby the time before, when he beat Snow Leopardess by an easy 16 lengths giving her almost a stone. The runner-up won at Haydock next time and was just beaten in the Rowland Meyrick off 135. 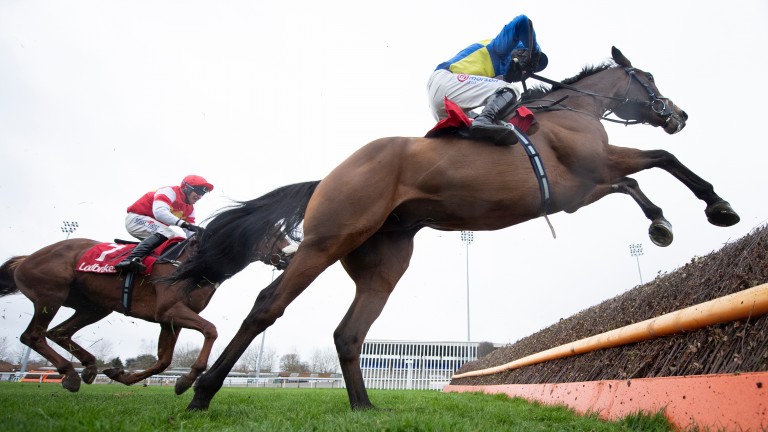 Shan Blue (near) leads The Big Breakaway at the last at Kempton
Edward Whitaker (racingpost.com/photos)

Collateral form is not the major appeal of Shan Blue. Just watch him jump. He is pretty flawless and takes lengths from his rivals. It more than likely won him the Kauto Star, as he conceded none of the various stutters, mishaps and stumbles that runner-up The Big Breakaway inflicted upon himself at the last five fences.

A horse that jumps with Shan Blue's exuberance, particularly at Sandown where there is so much congestion in terms of fences, ought to make tactical calculations simple. It is hardly worthwhile holding him up, especially down in trip, and anything that takes him on will have to go hard.

It is unlikely Harry Skelton will face much competition anyway. Paint The Dream seized the initiative in handicap company at Newbury last time, but may lack the pace even if Connor Brace fancies taking the same approach.

Perhaps the main downside to Shan Blue being ridden aggressively is it will suit his rivals just fine. Hitman has shown free-going tendencies, Dame De Compagnie has loads of form in big-field handicaps over hurdles and Messire Des Obeaux is a noted stalker.

The last-named's win in the rearranged Dipper had looked questionable as a Grade 1 guide, based on the moderately fast finish and proximity of Lieutenant Rocco. That horse's impressive win at Ffos Las on Thursday against useful rivals has removed much of the doubt. 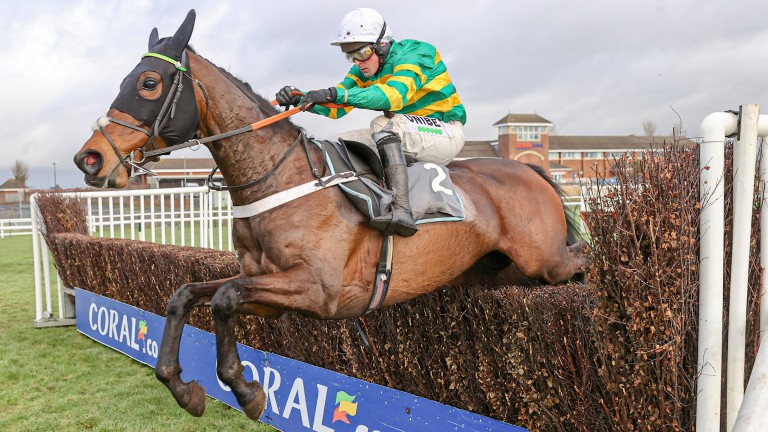 As the quality increases in the Scilly Isles, it follows that ability becomes the dominant factor – note that most recent winners had been classy hurdlers. Experience is secondary; second-time-out chaser Itchy Feet showed last year that even jumping proficiency is optional.

On the subject of ability, it should be noted that 3lb weight-for-age and 7lb weight-for-sex allowances afford Hitman and Dame De Compagnie a bigger say than their raw form would imply. Neither should be brushed over lightly in a Scilly Isles that promises to enhance the race's growing profile.
Keith Melrose, betting editor

While so much of the programme at this stage of the season is geared towards Cheltenham, Messire Des Obeaux has been aimed at this race with nothing more pressing than extending his unbeaten record over fences to three, having shown plenty when skipping away from the highly-rated Protektorat in the rearranged Dipper Novices' Chase on his last start.

That performance was all the more noteworthy given the nine-year-old had only made the track once since the spring of 2017 before embarking on his chasing career in December. 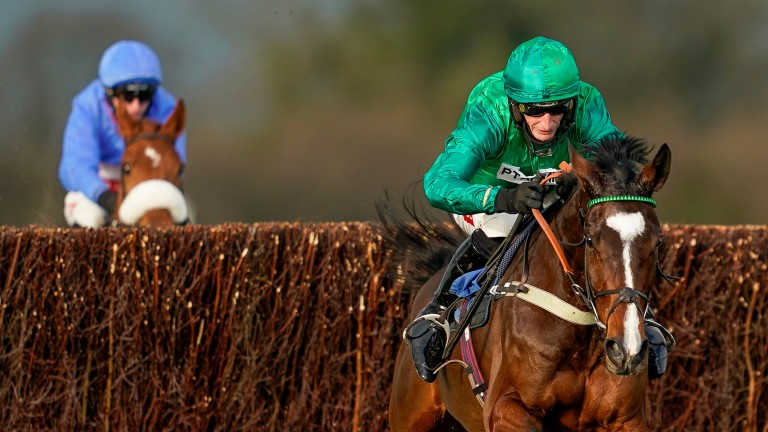 Messire Des Obeaux: two from two over fences and bids to uphold the fine record of his connections in the Scilly Isles Novices' Chase
Alan Crowhurst / Getty Images

King said: "This is his Cheltenham in many ways. He's not entered for the festival as his past injury problems mean I don't want to risk running him up and down the hills there.

"He's exceeded all our hopes and expectations over fences this season, winning two from two at Wincanton, and this is the obvious target for a horse who is already proven at the highest level, having won the Challow Hurdle at Newbury in 2016.

"I've been very happy with him since his last win and his preparation has gone perfectly. Daryl Jacob came in to school him on Monday, they jumped six fences and it went fine.

"I didn't want to step him up to three miles and, while he may well stay in time, he's not slow and I firmly believe that if a horse is running well over a certain trip, why change it?"

Messire Des Obeaux bids to give owners Simon Munir and Isaac Souede – as well as their retained jockey Daryl Jacob – a fifth win in the Scilly Isles, having scored with Gitane Du Berlais, Bristol De Mai, Top Notch and Terrefort between 2015 and 2018.

Fergal O'Brien, trainer of Paint The Dream
His form last year was okay and he ran very well in the Dipper. We did a wind op in the summer and it took him a run or two to realise his wind isn't going to catch him. He was very impressive at Newbury and if he produces a similar run and maybe improves a little bit with a bit of confidence, we'll be very happy with him. 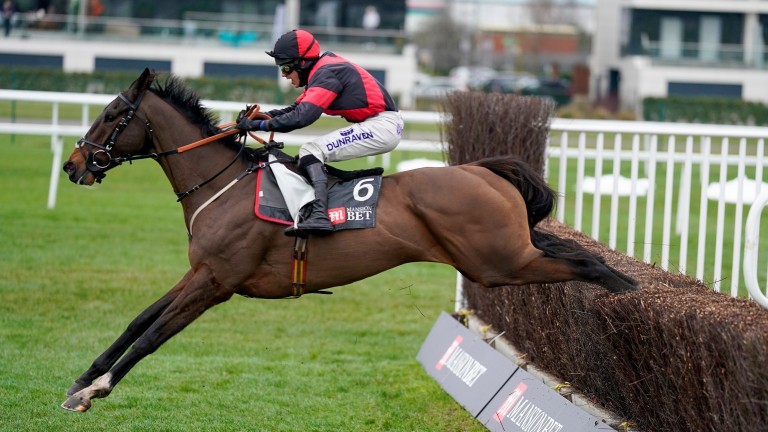 Dan Skelton, trainer of Shan Blue
I'm really happy with him and this was always the race he was going to come to. He's a National Hunt-bred horse so I'm not worried about the testing ground. It's another very good bunch of horses to face but he schooled well on Thursday and there are no excuses not to get going with him.

Philip Hobbs, trainer of Sporting John
Until turning for home at Exeter he was going brilliantly and his jumping was fantastic but he didn't get home at all. All the tests seem to show nothing whatsoever wrong and that's why we're back on course with him. We hope he runs a much better race.

Richard Rowe, trainer of Up The Straight
Strictly through a formline in the Sidney Banks at Huntingdon last year you've got the favourite [Shan Blue] at 5-2 and we're 40-1 for finishing three lengths behind him. He's got his mark which shouldn't be affected unless he wins. I wanted to get some more experience into him. There's a lot to gain and nothing to lose.

Paul Nicholls, trainer of Hitman
He won't mind the ground, he's won on heavy in France and at Ffos Las. I'm sure he'll get two and a half miles, and he's got a chance in a very good race.

Nicky Henderson, trainer of Dame De Compagnie
This is a very competitive race whereas her only run over fences was a very uncompetitive two-horse race, but I've got to get a run into her. We've got to see what she's capable of and where she's going, but it's a proper Grade 1 and she's coping with testing ground better now she's older.
Reporting by Scott Burton

FIRST PUBLISHED 6:00PM, FEB 5 2021
It's another very good bunch of horses to face but he schooled well on Thursday and there are no excuses not to get going with him