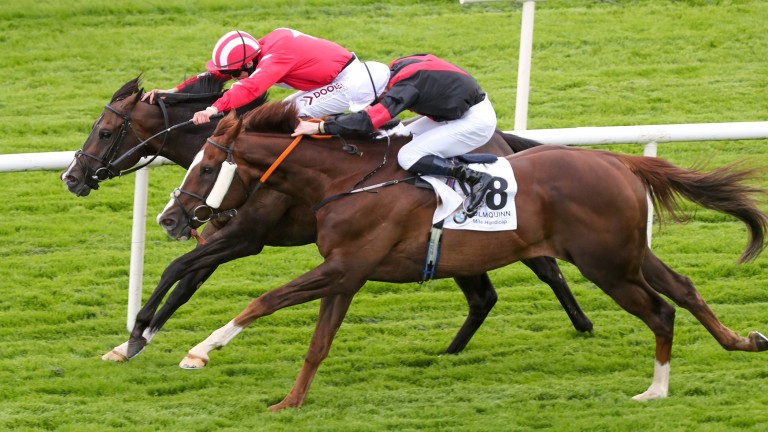 Jessica Harrington has been unfortunate to come out on the wrong side of some close finishes in feature races this week, particularly with One Voice and Valeria Messalina at Goodwood, but the in-form trainer could be set to end the busy seven-day period on a high with Njord.

The progressive four-year-old looked to have just done enough to overcome stall 18 in Tuesday's Colm Quinn BMW Mile until last year's hero Saltonstall managed to get his nose in front on the line.

The feature event on the final day of a unique Galway festival looks tailor-made for the upwardly-mobile performer to gain quick compensation, though.

Set to go up in the weights for his near miss earlier in the week after this, Njord is technically 6lb 'well-in' here and is drawn much better in stall seven, with the drop to 7f the only minor concern - the stiff Ballybrit finish will help him in that department. 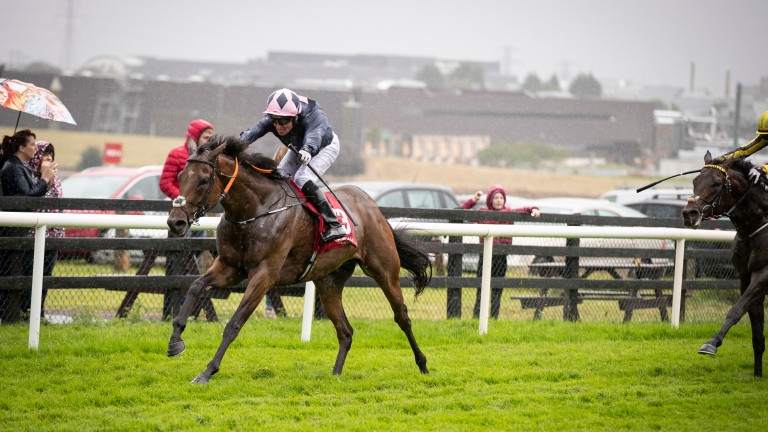 Laughifuwant: has proven himself in stakes company
Patrick McCann
History is on his side too, with seven Ahonoora winners having been beaten in Tuesday's mile contest, including six who were placed.

Last year's winner from stall 16 Laughifuwant is back for more and warrants respect with the ground in his favour.

An even trickier draw in stall 18, lack of a recent run and 12lb higher mark than his pretty dominant victory in this last year obviously make life tougher, though.

It's been ten years since Ado McGuinness, trainer of Tuesday's mile hero Saltonstall, last won the Ahonoora with Toufan Express and his two-pronged attack of Laugh A Minute and Current Option give him solid claims of claiming another major pot. 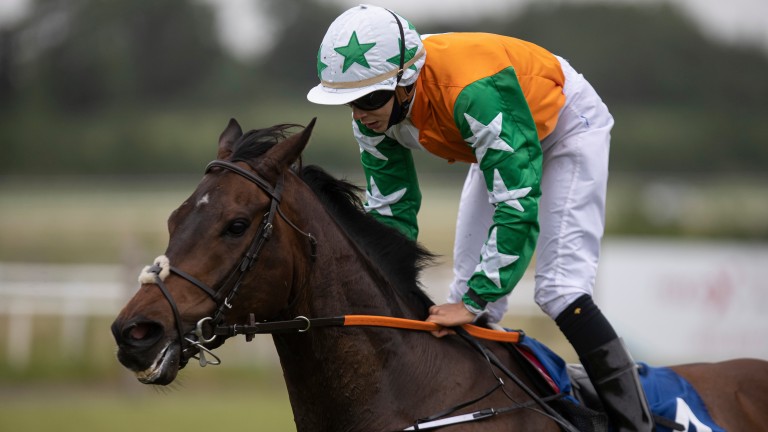 Laugh A Minute: ready winner at Limerick before not being disgraced last time
Patrick McCann
A potential dark horse in the line-up is Tim Doyle's Spanish Tenor, who will relish the testing ground and fired a warning shot at Leopardstown on his comeback.

Don't be surprised if he's in the thick of things late on, while the Matthew Smith-trained Flaming Moon looks on the right side of the handicapper and rates a huge danger if seeing out this trip, one of only two three-year-olds in the field.

Ado McGuinness, trainer of Laugh A Minute and Current Option
The draw has been kind to us this time. I'm expecting a big run from Laugh A Minute [stall three]. He has to shoulder top weight but a lot of the fancied horses have big weights and hopefully he'll handle the [soft] ground. Nothing happened for Current Option [stall six] on Tuesday in the Colm Quinn BMW Mile when drawn wide but he didn't have too hard a race so hopefully he can put up a big performance.

Ger Keane, trainer of Laughifuwant
We don't seem to have had any luck with the draw again. He's in good nick, as well as I can have him without getting a run into him. We haven't got to run him this year because we've been looking for soft ground and the more rain the better for him. It's a very tough ask off 10st but we're hoping he can run well. 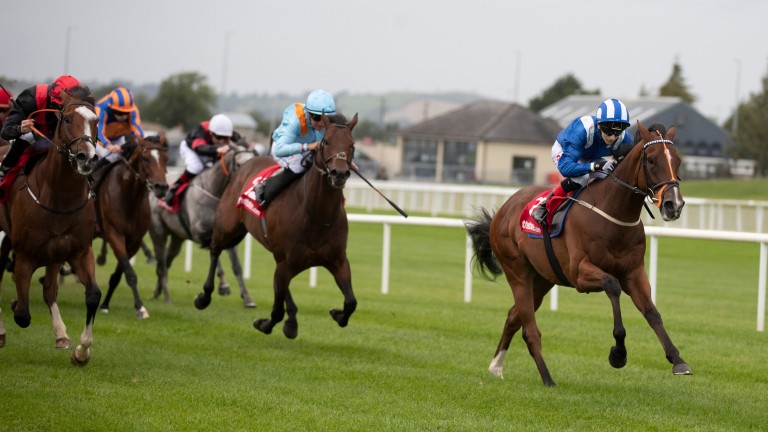 Dermot Weld, trainer of Jassaar
He's run two excellent races this season, particularly at Naas last time. He's in great form at home but carrying 9st 12lb and having to overcome stall 11 are the negatives.

Jessica Harrington, trainer of Njord
He's in great form and was just touched off here on Tuesday. He loves Galway, soft ground will be fine for him and has a decent draw [stall seven].

Johnny Murtagh, trainer of Lord Rapscallion
The draw isn’t ideal, Galway is a tough place and he didn’t perform there last year. But he seems to be in a good frame of mind at the moment. It’s a big pot and he deserves to take his chance.

Aidan Fogarty, trainer of On A Session
He had a lovely run on Tuesday when he just got caught a bit wide turning into the straight. He bounced out of that in great form and we're hopeful of a big run. We think the drop back to seven furlongs will suit and the bit of soft ground will help. 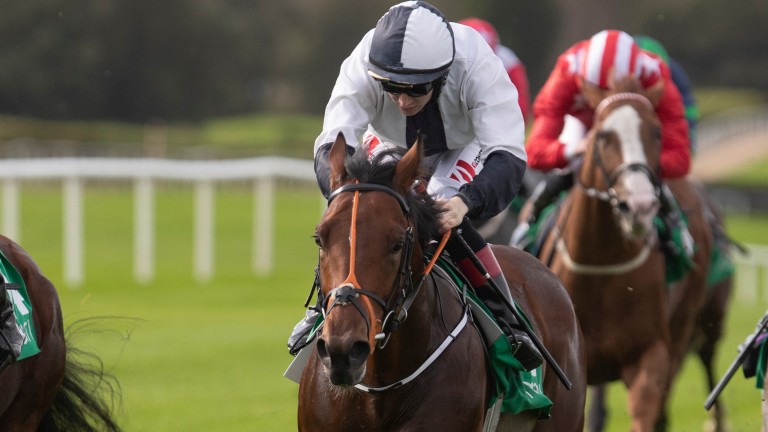 Flaming Moon: three-year-old rates an exciting prospect for Matthew Smith
Patrick McCann
Tim Doyle, trainer of Spanish Tenor
He's in great order. We were happy with his first run back at Leopardstown on ground that would have been a shade quick for him. He has a low draw and Billy Lee to steer him, so we're hopeful he can run well. He was gelded before this season, he wasn't fully concentrating before, but we think he's more tuned in now. He obviously likes a cut in the ground.

Matthew Smith, trainer of Flaming Moon
He's in great form and the soft ground will suit but my main concern is just whether he'll stay over this stiff seven furlongs. He's a nice horse with plenty of speed and it's hard to know whether he'll get home. We were happy with his run in the Scurry Handicap at the Curragh last time. He was pretty much on his own early on and was a bit lost but came home well.

FIRST PUBLISHED 6:00PM, AUG 1 2020
He's in great form and was just touched off here on Tuesday. He loves Galway, soft ground will be fine for him and he has a decent draw [stall seven]

Laburnum blooms as Seamie Heffernan returns from enforced absence with a bang Exciting three-year-olds have potential to thwart Ancient Spirit's Group 3 bid Ger Lyons loses Irish St Leger hope Nickajack Cave to Black Caviar team Take away the crowds and Galway is just a week of mediocre racing Alpine Star and Circus Maximus could add extra spice to intriguing Marois clash 'The more I run her, the better she is': Millisle out to bag another Group 3