Well above par? Why Threeunderthrufive is the one to beat for Paul Nicholls 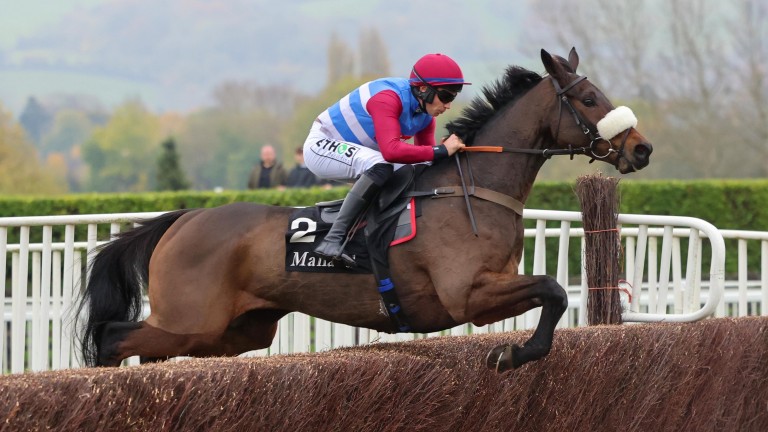 Big fields have never been part of the Hampton's make-up and it has been a mixed bag as to whether the race has produced Graded performers or just smart staying handicappers.

The two strands appear to have met this year, which is why the classy Threeunderthrufive is such a warm order. He has to concede weight to his rivals, which brings Mint Condition in particular close on ratings, but it is the favourite who might have more room to progress.

Threeunderthrufive has seemed to have plenty in hand while achieving his form, which includes winning a Grade 2 more or less on the bridle last time, whereas Mint Condition was arguably a slightly fortunate winner at Haydock 16 days ago. Runner-up Ashtown Lad might have pressed on soon enough in the deep conditions. At least Mint Condition, whose dam won four points and stayed 3m under rules, should relish the new trip.

Handicaps look the likeliest arena in the short to medium term for the other three runners. Any News has the sort of engine that might bring him back to this grade in time, but he has looked a work in progress over fences so far. The same goes for Doyen Breed, who was outjumped as much as anything by Bushypark at Kelso last month having made a successful chasing debut at Hexham.

Mossy Fen won the Leamington Novices' Hurdle on this card two years ago but it has been a struggle since, including a 14-month absence and leaving Nigel Twiston-Davies since his latest run. He has the ability to command respect if the betting speaks in his favour, although his jumping let him down on both chase starts last autumn.

It could be that the Hampton this year is best treated as a watching race. Watch how Threeunderthrufive jumps, as he can go big or to the right, and watch out for handicap potential in behind.
Race analysis by Keith Melrose

Paul Nicholls' assistant trainer Harry Derham believes Threeunderthrufive has a "leading chance" to pick up more Grade 2 honours here before some lofty targets at the major spring festivals are considered.

The Max McNeill-owned seven-year-old has rattled off three quick-fire victories over fences, culminating with an easy seven-and-a-half-length success in the Grade 2 December Novices' Chase at Doncaster last month.

Threeunderthrufive carries a 5lb penalty but Derham is optimistic he can give Nicholls a second successive win in the race following Next Destination's victory last year.

Derham said: "He's in good nick. He's well on top on ratings against his rivals and has a leading chance. I'm very confident of a good run from him."

Threeunderthrufive holds entries in the Brown Advisory Novices' Chase and National Hunt Chase at the Cheltenham Festival, but Derham insists they are focused on the job in hand at Warwick first before any target is pinpointed.

"I wouldn't say this is a fact-finding mission as he's run and won over three miles before, and it might not teach us anything we don't already know.

"It's a really nice prize that we wanted to target him at and I expect him to run well."

Neil Mulholland, trainer of Any News
He's grand. He hit a fence down the back quite hard at Exeter last time and hopefully he will have learned from that, which he needs to have done. He's done well at home since and he's stepping up to this trip for the first time under rules. We think he'll get it and we're hoping for a good run.

Sandy Thomson, trainer of Doyen Breed
He's very well but has got a mark that makes it difficult to place him. If he'd got beaten by a head two starts ago he'd have only been rated around 132. We're having a go and Threeunderthrufive looks the horse to beat, but I'm hoping he'll run well.

Christian Williams, trainer of Mossy Fen
He seems to be well and we're looking forward to getting him out. We wanted to run him before but the ground has only just come soft enough for him. It's a big ask on his return and we're throwing him in at the deep end, but I'm hoping for a positive run and we can go on from there.
Reporting by Matt Rennie

FIRST PUBLISHED 6:00PM, JAN 14 2022
He's well on top on ratings against his rivals and has a leading chance

'Kim would have loved it' - Colin Tizzard to give grandson debut ride on Sunday Will Gordon Elliott dominate again? Four National Hunt Chase takeaways What next for Sporting John? Hobbs mulls festival options for Warwick winner 'There is no better feeling' - relentless Stag Horn delights Scholfield 'I was able to dictate' - Eclair Surf routs Classic Chase field for Bellamy Watch: follow all of Saturday's big-race action on Racing Post Live