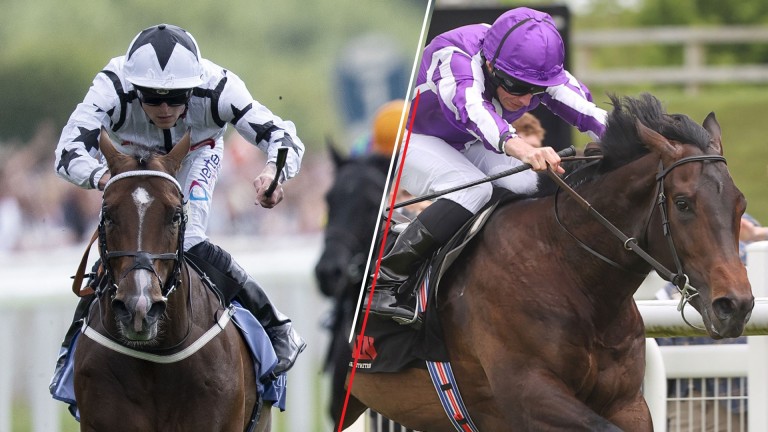 Marshman (left) and Blackbeard: head the market for the Middle Park at Newmarket
1 of 1
By Robbie Wilders and David Carr UPDATED 6:33PM, SEP 23 2022

Previous experience has been a crucial factor in solving the Middle Park Stakes as the last ten winners had averaged 4.7 runs ahead of the race. That stat counts against the early favourite Marshman.

Karl Burke's speedy son of Harry Angel has only run three times and is essentially favourite by default as Noble Style, who he finished a length and a quarter behind in a Gimcrack that is working out well, suffered an injury ahead of this race.

Marshman probably possesses the form to win this and is open to improvement. However, this idiosyncratic course has exposed many high-class juveniles in the past and that is the worry, although the Rowley Mile will be a new experience for each of the colts taking their chance.

Mischief Magic and Persian Force have, at least, encountered a similar sort of topography on Newmarket's July course before and both scored.

Trainer Karl Burke has enjoyed a fine season, but it is concerning the sustained purple patch has dried up recently as he is only 2-44 over the past fortnight.

Comparisons can be drawn between Aidan O'Brien's 2017 winner US Navy Flag and his two representatives this year.

US Navy Flag had run eight times before the Middle Park and Blackbeard and The Antarctic are the most battle-hardened in this field with seven previous outings.

Jockey bookings suggest Blackbeard is Ballydoyle's chosen one and he has twice accounted for The Antarctic in the past. 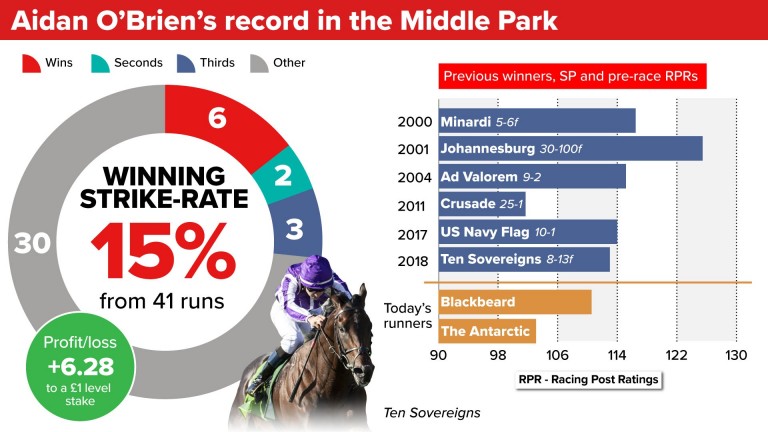 Blackbeard is the sole Group 1 winner in the line up and arrives after denying Persian Force in the Prix Morny at Deauville last time. The suspicion is neither are world-beaters, but that may not be a necessary requirement to win and toughness could be equally as important.

It is a surprise that Charlie Appleby, the most dominant trainer of juveniles over the last few seasons, is without a victory in the Middle Park since 2014.

He saddles perhaps the best long-term prospect of all in Mischief Magic, who has run four times and has progressed rapidly since falling short behind Royal Scotsman when third at Goodwood on his debut in May.

A runaway winner of a July course novice under a penalty two starts back, Mischief Magic advanced his form again with a two-length victory in a Group 3 at Kempton.

The winning margin flattered his rivals that day as he was drawn widest of all and produced some fast closing sectionals from off the pace. He could be the one to beat.
Race analysis by Robbie Wilders

Burke convinced there is more to come from Marshman

Noble Style could have his lofty reputation enhanced in his absence this afternoon, although that would be a mixed blessing for his owners and trainer.

Trainer Charlie Appleby described the Godolphin colt as "the clubhouse leader" among his powerful team of two-year-olds after an impressive victory in last month's Gimcrack Stakes at York and nominated the Middle Park Stakes as his obvious next target.

The juvenile's step up to Group 1 level has been delayed by a bout of colic. Yet his prospects for the 2,000 Guineas would still be boosted were the York runner-up Marshman to score in his stead.

That is an entirely feasible outcome according to the bookmakers, who made the Karl Burke-trained two-year-old favourite to land this race at the expense of Noble Styles's stablemate Mischief Magic. 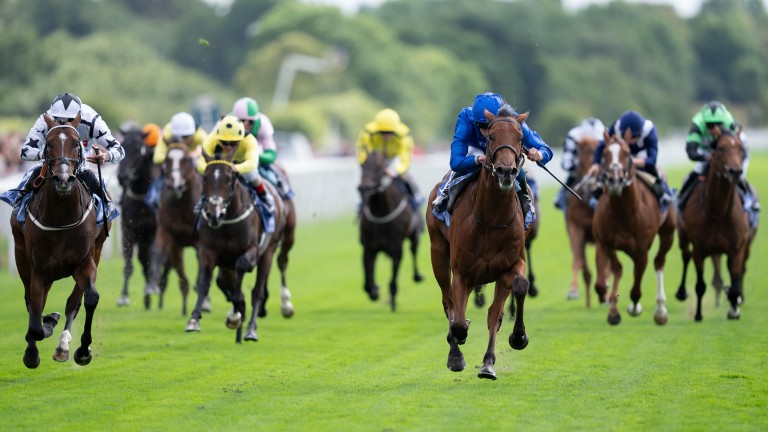 The Gimcrack third Cold Case, who is also with Burke, has already boosted the value of the form by winning the Weatherbys Scientific £300,000 2-Y-O Stakes at Doncaster.

There could be better still to come from Marshman, whose trainer feared his York run came plenty quick enough after his previous win at Thirsk and also felt he showed signs of inexperience.

Burke said: "I hope he'll run a huge race. It was a very good horse of Charlie Appleby's that beat him at York and Marshman probably ran a bit green when he it the front. I'm sure there's a bit more to come from him.

"He's working really well and has had a good break after the Gimcrack."

Aidan O'Brien, trainer of Blackbeard and The Antarctic
Blackbeard is a hardy horse who takes his racing really well. He hasn't raced in Newmarket before so that will be new to him, but he's got plenty of experience. We've always thought he was a very solid horse right from the start and he's never let us down. He goes there in good form. The Antarctic is coming forward with every run and wasn't too far behind Blackbeard the last day in France.

Charlie Appleby, trainer of Mischief Magic
We were all very impressed with the way Mischief Magic quickened at Kempton. We know that we are taking on a different calibre of horse this time, but he has progressed with each run and won’t look out of place in this field.

Richard Hannon, trainer of Persian Force
It's a really good race. I think we'll ride him a bit more positively this time. He's a very good horse and I'd love to see him win a Group 1, he deserves it. He'll get seven furlongs, no problem, later on. I can't wait for him to go seven furlongs.

James Ferguson, trainer of Zoology
He was impressive when he won a novice at Yarmouth in a good time and he looks to have come on from that run. This is a big step up in class but he has the attitude to handle it.
Reporting by David Carr

2.25 Newmarket: 'She's as good as Tiggy Wiggy' - who will come out on top in the Cheveley Park?

3.20 Curragh: 'She has a proper shout' - who wants to be a millionaire at the Curragh?

3.40 Newmarket: 'He'll run a big race' - trainers on their hopes for the Cambridgeshire