The next Douvan or Un De Sceaux? Mullins puts his confidence in Energumene 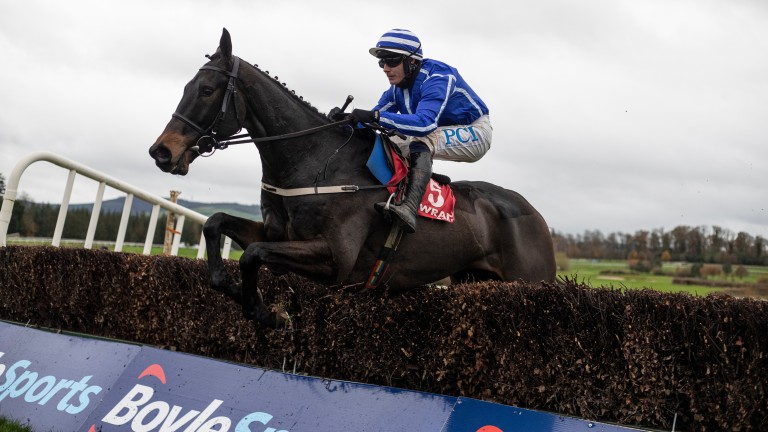 Willie Mullins has another formidable arsenal of novices and his weapon of choice here is Energumene.

After a bumper and hurdle campaign that gave only the odd indication of his power, Energumene has exploded into life over fences.

Electrifying on his chase debut in November at Gowran Park, where he burned off his rivals from the front, he proved he could be equally as devastating at a higher level at Naas next time when blasting away from Captain Guinness, who reopposes here.

The champion trainer has a habit of producing supercharged novice chasers for this race, including Un De Sceaux, Douvan and Footpad, and the feeling in Closutton is that Energumene can be just as powerful a force as those who have gone before him.

His stablemate Franco De Port has inflicted his share of damage in his short spell over fences. He squeezed the life out of Darver Star in the Grade 1 Racing Post Novice Chase with the wayward Felix Desjy well beaten in third.

That win was achieved in rather cunning fashion with Franco De Port having sneaked into the race from the rear under Bryan Cooper, who these days is riding much more like, well, the old Bryan Cooper.

The partnership remains intact and, if Franco De Port can withstand what is expected to be a frenetic first mile, he should be able to play some sort of a hand in the race.

Mullins' four-pronged attack is completed by Blackbow and Unexcepted, the pair perhaps not as deadly as Energumene but dangerous to underestimate nonetheless.

Gavin Cromwell will be hoping the Mullins rockets fail to fire. If that happens, Darver Star is more than capable of hitting the target for the County Meath trainer.

Last season's Champion Hurdle third looked likely to make up into an even better chaser when running riot at Punchestown but defeats in the Craddockstown and at Christmas have left Cromwell more in hope than expectation of a Grade 1 breakthrough here.

Henry de Bromhead, having won this race with Some Plan and Notebook in recent years, has an uncanny ability to churn out crack two-mile chasers season after season, but his representative Captain Guinness looks to have only a slim chance of revenge over Energumene.

Felix Desjy is the only other realistic challenger to the short-priced favourite. Once a tearaway who used to do his best to break the sound barrier in the early parts of his races, Felix Desjy has seemed much more relaxed since being sent chasing by Gordon Elliott.

The negative is that he hasn't jumped two fences the same and needs to be more assured with his jumping if he is to have any chance.

I'm A Game Changer is running purely for prize-money. His best chance of getting some would be if some of the major contenders took each other out.

In a race heavily loaded with gunpowder, there is every chance of that happening. Expect fireworks.

Willie Mullins, trainer of Blackbow, Energumene, Franco De Port and Unexcepted
Blackbow was third behind Energumene at Naas last time and needs to improve his jumping if he is to get closer here. This should be valuable experience for him. Energumene has done nothing wrong in two runs over fences and with a bit of luck he should make it three from three. He's a great jumper and will take all the beating here. Franco De Port won over this course and distance last time and isn't out of it. He'll relish the testing conditions. Unexcepted might be inconvenienced by the soft ground but has the credentials to take his place in this line-up.

Henry de Bromhead, trainer of Captain Guinness
He won well in a beginners' chase at Punchestown in December before struggling to handle the heavy ground at Naas last time when second to Energumene. Better ground will make a big difference to him. If he runs well we'll seriously consider the Arkle for him.

Gavin Cromwell, trainer of Darver Star
It was a messy race over Christmas. Having said that, this is probably a better race and he'll need to put his best foot forward. He's in good nick and hopefully he'll give a good account.

Jack Kennedy, rider of Felix Desjy
He has relaxed a lot better this season but his jumping will need to improve. He can be very good at one fence and then jam on at the next. If he can brush up on his jumping, hopefully he can be involved.

Andrew McNamara, trainer of I'm A Game Changer
The owners like the idea of running here and I suppose we weren't expecting the race to have this many runners. We'll take our time out the back and hopefully pick up as much prize-money as possible.

FIRST PUBLISHED 6:00PM, FEB 5 2021
Energumene has done nothing wrong in two runs over fences and with a bit of luck he should make it three from three

Where was Dettori? Where were the Brits? Irish Champions Weekend felt too Irish Forgo the Flying Five in order to watch Snowfall? It can't ever happen again... 'We have to try something' - McCullagh calls for false rail at Leopardstown Over €17 million wagered as Ireland's first Tote World Pool event proves popular Five-time Group 1 winner St Mark's Basilica holds on in front once again Harrington makes plans for Irish Champions Weekend stars after 'amazing' weekend