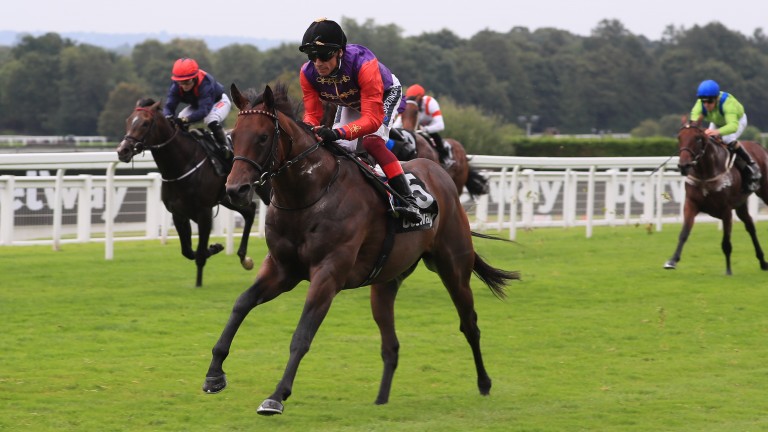 Solario Stakes winner Reach For The Moon steps up to Group 2 company in the Champagne Stakes
Mark Cranham
1 of 1
By Tom Collins and David Carr UPDATED 6:30PM, SEP 10 2021

You don't need quantity to have quality. There was a sense of disappointment when just four runners were declared for this year's Champagne Stakes – much like the Irish Champion Stakes at Leopardstown – but there's little to dislike about a clash between a handful of 2022 Classic hopefuls.

Solario Stakes winner Reach For The Moon heads the quartet with an official rating of 114 and a career-best RPR of 109, which places him eighth in the top two-year-old rankings, five spots behind his Champagne rival Lusail (career-best RPR 112).

Reach For The Moon lacked the same precocity as Lusail and took three runs to lose his maiden tag, albeit he bumped into the talented New Science and next year's 2,000 Guineas and Cazoo Derby favourite Point Lonsdale on his first couple of outings.

A ready four-length novice victory at prohibitive odds (2-9) at Newbury was expected, though the form has worked out exceptionally well with runner-up Harrow racking up a hat-trick since, including a sales race here earlier in the week.

The son of Sea The Stars confirmed that Classic targets were realistic by sluicing up in the Solario at Sandown, though his tendency to race keenly could be his downfall without a guaranteed front-runner. Perhaps Frankie Dettori will go to the front. 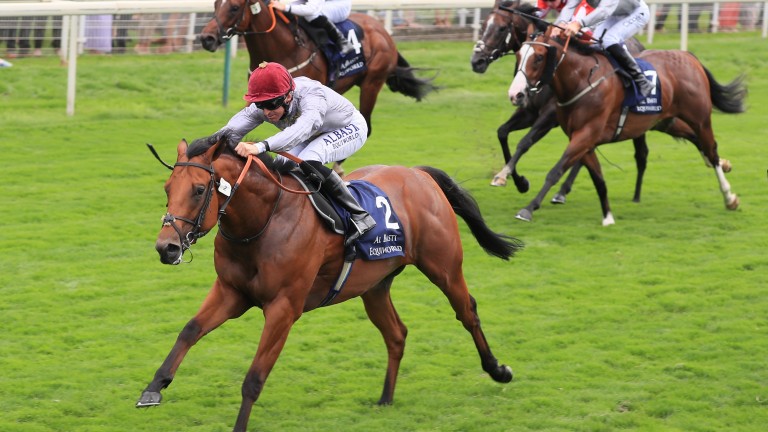 Lusail: winner of four of his five starts, including a pair Group 2s
Mark Cranham

His chief adversary is Gimcrack winner Lusail, who has recorded a brace of successes at York and Newmarket and now heads to Doncaster in search of a third Group 2 win in a race that Richard Hannon has farmed in recent years.

Given he's proven at the level, will relish the going and looks sure to be suited by the step back up to 7f, why isn't he vying for favouritism? He should be. He has already achieved more than Threat (2019) and Chindit (2020) had before winning this race.

Although significant improvement is needed on figures, don't write off Bayside Boy. This race has been circled in the calendar since he made a winning debut at Newbury and he was only outmuscled in the closing stages by the battle-hardened Masekela in the Washington Singer last month.

It would be a major shock if outsider Twilight Jet toppled his well-regarded rivals and he can be safely discounted. He finished two lengths behind Lusail last time and has stamina doubts at the trip.
Race analysis by Tom Collins

Platinum Jubilee dream is alive for The Queen

It is too much to hope for, isn't it? Would it not be too perfect for the Queen to win her first Derby after 70 years of trying, during the Bank Holiday weekend that marks her Platinum Jubilee.

Well, the dream is alive and the bookmakers – who tend to be guided more by form than by a romantic storyline – have her Reach For The Moon as second favourite for Epsom next June.

That was their hard-headed business decision after the exciting colt made it two from two with a most impressive victory in last month’s Solario Stakes at Sandown, sauntering home an easy four lengths clear.

His joint trainers have been understandably keen not to burden the juvenile with too much expectation and Thady Gosden stressed: "It's a long way away from the Derby at the moment but he's heading in the right direction and hopefully he progresses."

That Solario win was no flash in the pan from a colt who had finished a close second in the Chesham Stakes at Royal Ascot and takes on the Gimcrack Stakes winner as he steps up to Group 2 level for the first time on Saturday.

"He's progressed nicely," Gosden added. "He ran a good race at Ascot, he progressed in a novice and he won well at Sandown in the Solario.

"He goes there in good form but it's a very competitive race, there's Lusail in there, who has plenty of speed and won the Gimcrack."

That Gimcrack success convinced Richard Hannon that Lusail is "undoubtedly a 2,000 Guineas horse". That was the trainer's bullish prediction after his colt defied a 3lb penalty when winning at York last month.

The juvenile has been beaten only once in five starts, when facing unsuitably soft ground at Pontefract in the spring, and Hannon knows what it takes to land this prize, having won it for the last two years and three times overall.

He said: "Lusail has got every chance. He's done nothing wrong all year, he's very straightforward and he's a good horse. He'll need to be to win it with a penalty."

Roger Varian steps Bayside Boy up in class after the twice-raced colt's close second in a Listed race at Newbury last month.

"He just got touched off by a nice type at Newbury last time and will keep improving," the trainer said. "It's a strong race but he deserves a crack at this level and we expect the track and ground to suit him."
Reporting by David Carr

FIRST PUBLISHED 6:00PM, SEP 10 2021
It's a long way away from the Derby at the moment but he's heading in the right direction and hopefully he progresses