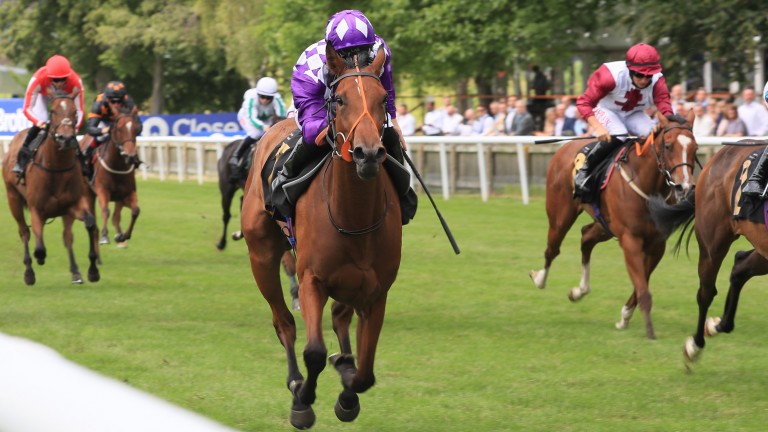 Richard Hannon has his juveniles in fine form and the trainer bids to add another big two-year-old race to his recent haul of winners with System in this Group 3.

The daughter of Galileo Gold landed the Empress Stakes at Newmarket last month and wins for Lusail in the July Stakes and Gubbass in last week’s Super Sprint confirm the yard’s strength in the juvenile division. Long-serving jockey Pat Dobbs has been an integral part of their success, too.

Dobbs was on board for System’s Empress victory and Lusail’s July Stakes win, and his record in Group and Listed races for the Hannon yard this season is 3-13 (23 per cent).

System finished a neck ahead of Desert Dreamer in the Empress, but that reopposing rival has since chased home Sandrine in the Duchess of Cambridge at Newmarket. Desert Dreamer improved 5lb on her Empress run judged on RPRs that day and System has 4lb to find if the figures are taken literally. System is unexposed in comparison, though, after just two runs.

Three of the last ten scorers came into the race as once-raced winners and that brings in Nazanin and Miss Calculation. Nazanin was sent off a red-hot 6-5 favourite on her debut at Newbury last month and justified the heavy support when scoring by a length and a quarter.

Since the start of 2016, there have been 24 juveniles who won at odds of 6-5 or shorter on their debuts that have subsequently contested Group races on their second starts, and five were successful (21 per cent; -£10.96 to £1 level stakes).

James Tate saddled Under The Stars to spring a 25-1 surprise in 2019 and El Hadeeyah will be only the trainer’s third runner in the race. William Buick is booked and the pair have teamed up for three winners from 13 runners this year, for a £1 level-stake profit of £5.75.
Race analysis by Graeme Rodway

Williams dreaming ahead of Empress rematch

Desert Dreamer has some unfinished business with likely favourite System having finished an unlucky second to the Richard Hannon-trained runner in a Listed contest at Newmarket last month.

Stuart Williams’ stable star has since filled the same placing behind Sandrine in the Group 2 Duchess Of Cambridge Stakes and is so talented at home that she works only with older horses.

Williams said: “Desert Dreamer didn’t get a clean run through in the Empress Stakes when finishing second to System and it will be an interesting rematch. On the other hand, System was only having her second start so did well to win that day.

“I’m looking forward to running her again as she came out of the Duchess of Cambridge in great form and if she wasn’t running I’d have to gallop her at home so it makes sense to go where there is some prize-money.”

On her homework schedule, he added: “Desert Dreamer has never worked with our other two-year-olds as we only had six youngsters early on and she was much ahead of them so she works with older horses.”

Joe Foley, spokesman for Clipper Logistics, owners of Attagirl
Our Lowther winner Living in the Past was placed in this race before heading to York and Karl Burke rates this filly equally highly so we’re looking forward to seeing her run.

James Tate, trainer of El Hadeeyah
She’s a filly we’ve always liked and she would have a chance on her third to Desert Dreamer on her debut at Newmarket in April. She lost her way on bad ground after that but won well last time and we are just hoping the rain stays away.

George Boughey, trainer of Sassy Rascal
She did well to finish where she did from off the pace at Yarmouth last time when she was taking on colts as there was a massive tail wind. She should appreciate this stiff six furlongs and I expect her to outrun her odds.

Richard Hannon, trainer of System
She’s a filly we’ve always thought a great deal of and she displayed a great attitude to win a Listed race at Newmarket last time. This is another step up in grade but the decent ground should suit and we’ve got her entered up in all the big races so we’re hopeful of a very bold show.

Jose Santos, assistant to Ismail Mohammed, trainer of Zain Claudette
She won very well on her second start at Newmarket and has been training very well for this race. I expect her to run a very big race as she’s improving all the time.
Reporting by David Milnes