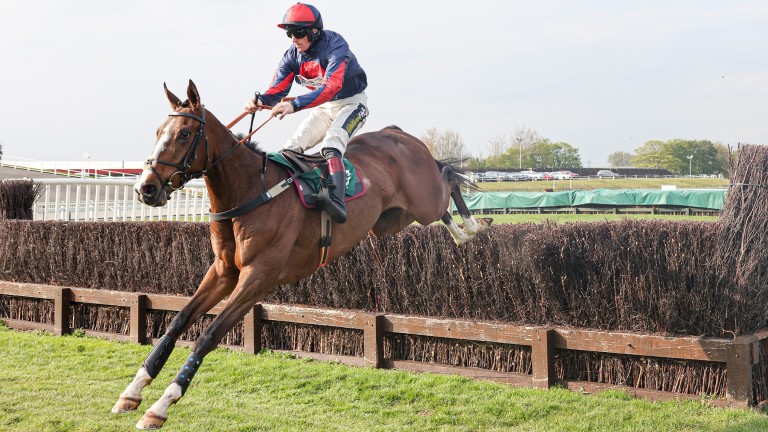 As opportunities on better ground become increasingly rare in winter, it is expected that the quality of summer jumps might improve in the years to come. The diet does not yet match up, with the Summer Plate being one of very few Graded opportunities for chasers. It also offers the minimum prize-fund (£40,000) for a Grade 3 race.

The obvious stepping stones to this race are both at Uttoxeter: the Clarke Chase in May over 2m4f and Summer Cup over 3m2f in June. Six of the 16 runners here ran in at least one of those races – Topofthecotswolds ran in both.

The race's grade requires that novices have already run three times over fences, meaning Captain Tom Cat is as unexposed as it is possible to be. He is unbeaten in three chase starts, the last two small-field novice events that force the handicapper to guess. RPRs suggest he might have taken a chance.

This will admittedly be a different test for Captain Tom Cat, who has led for every stride of his chasing career so far but will find that harder in a maximum field. He has also jumped slickly, which is always an advantage but one that possibly counts for a little less at Market Rasen, where the fences are not known for their difficulty.

Generally, it is unexposed horses that hold sway over the old stagers in the Summer Plate. That does not just apply to age. Few look as progressive as eight-year-old Fire Away, who perhaps remains best known for being part of February's oh-so-near gamble at Musselburgh and Southwell.

That was his debut for Laura Morgan and he has won four times since, including at Cartmel on his last chase run when he only really extended late in the day. With more likely to come, he deserves as much respect as any of his younger rivals.
Keith Melrose, betting editor

Richard Newland, trainer of Captain Tom Cat
He's been a complete revelation since going chasing and is unbeaten over fences. The handicapper has not made it easy for him and all of his racing over fences has been done going left-handed so it'll be a different challenge but he's in good form.

Dan Skelton, trainer of Solomon Grey & Danse Idol
Solomon Grey made a bad mistake last time at Uttoxeter which gave Harry no chance. We’re going to put cheekpieces on just to help him and he's off a mark which we feel he can be competitive off. He was an excellent third last year so he's got to be better this time around if he's going to win. Danse Idol arrives here in good form and has a low weight. Tristan Durrell is a good rider and takes a useful 7lb off.

Laura Morgan, trainer of Fire Away
I think he's the best chance I've had in a big race. He's in great form, the track will really suit him and they'll go a good pace which will really play into his hands.

Amy Murphy, trainer of Mercian Prince
He's in great form and I'm looking forward to it. We've been looking after him, which is why he won over hurdles last time. He's back over fences, which he enjoys the most, and fingers crossed he should see out the trip, particularly on top-of-the-ground.

Paul Nicholls, trainer of Darling Maltaix
He's been trained for this race and I'm very happy with his prep – his run and win at Newton Abbot last month has really tightened him. It promises to be a competitive contest but Darling’s ready for it.

Noel Williams, trainer of That's A Given
He went up 8lb for his easy win at Newton Abbot and it's a big step up in class but he's in great form. His confidence is high and we're rolling the dice.
Reporting by David Carr