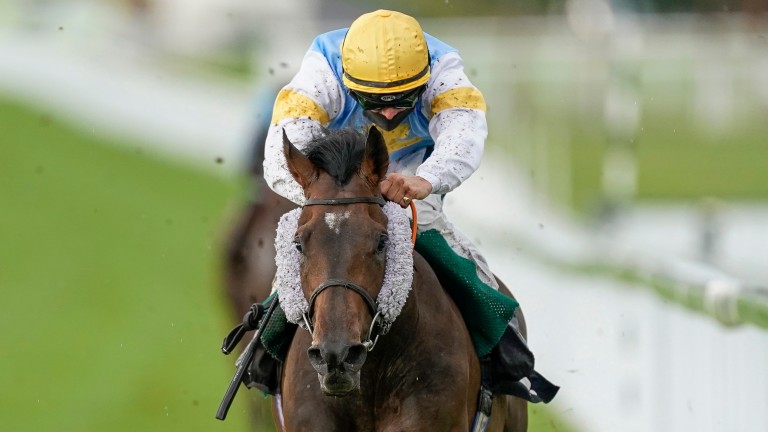 Dominic Ffrench Davis is feeling hopeful as Call My Bluff goes for a second hat-trick of his career with leading French jockey Mickaelle Michel primed to take over on the four-year-old.

He has been a rapid improver in 12 months, having broke his maiden at Class 5 level off 58 at Goodwood last August before racking up a treble. This season, Call My Bluff was well beaten at Southwell but fired back to form with stylish wins at Nottingham and Chester.

The handicapper has raised him another 3lb for that latest neck victory but it is hoped there is plenty more to come. Ffrench Davis is also backing his stand-in jockey, who is riding in Britain for the first time on Saturday.

The trainer said: "We were hoping to go to Goodwood but we missed the cut by one. He loves to get his toe in the ground and I wouldn't run him on anything other than good. He's in good order and he's straightforward so Mickaelle [Michel] should get on well with him."

Confidence is also high in the Jane Chapple-Hyam camp and it was increased after James Doyle was drawn to take the ride on Uber Cool. The seven-year-old scored impressively on his sole start of the season at Chester in May.

"He won well last time and will appreciate some give in the ground," the Newmarket-based trainer said. "We've got a top jockey in James Doyle so we're very privileged. We're hoping for a big run."

Team Great Britain have chances with course-and-distance winners Island Brave, for Cieren Fallon, and Adam Kirby's mount Cleonte, who won this race in 2018.

Ian Williams won this race in 2011 and 2012 and has four entered, with Sean Levey's mount East Asia looking the pick after his promising fifth-place finish last time out.

Ian Williams, trainer of East Asia, Indianapolis, Hasanabad and
Reshoun
We've got three respectable chances and Reshoun as a reserve. Indianapolis has yet to win for us but he's going in the right direction. Hasanabad has shown some decent form but might not enjoy it if the ground got too soft. East Asia has been quite a force in these staying races this year, although in his last two runs he hasn't quite been at his best. This race will suit him really well.

William Muir, joint-trainer of Just Hubert
He's always been a character and at Goodwood it was a case of the flip start being by the exit to the paddock – he's cleverer than all of us and knew that was the way out so stayed there. When he goes into the stalls he has no problem, he's in good order and should run a good race.

FIRST PUBLISHED 6:00PM, AUG 6 2021
He's in good order and he's straightforward so Mickaelle [Michel] should get on well with him