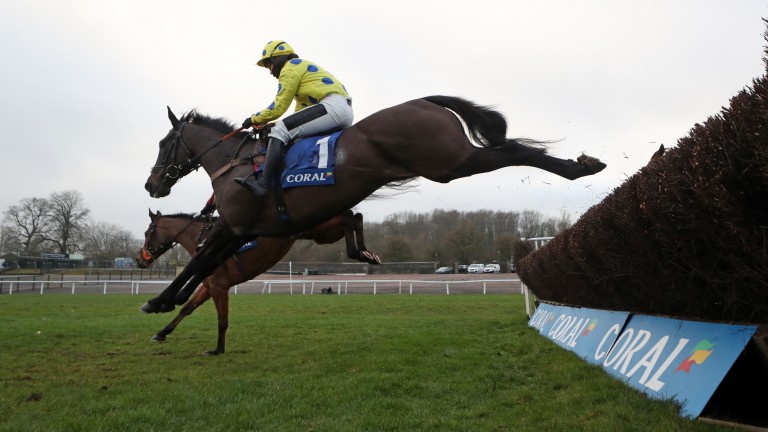 Yala Enki has come in for notable market support this morning ahead of the rescheduled Grade 2 Cotswold Chase at Sandown (2.20).

The 11-year-old has proven his stamina over far further than this afternoon's three mile trip and should relish the testing conditions.

Available at 15-2 overnight, Yala Enki is now a general 11-2 shot to claim a first victory at Grade 2 level following an impressive performance in the Portman Cup at Taunton last time.

Bristol De Mai remains the general 5-2 market leader, ahead of Santini at 11-4 and Native River at 9-2.

At Musselburgh, it is Billy Bronco who is coming in for support ahead of the Edinburgh National (3.45). The ten-year-old is now an 8-1 chance to take the marathon 4m1f test having been available at 11-1.

Wetherby off but Sandown passes inspection

Wetherby's meeting this afternoon has been cancelled after the track failed a morning inspection.

In the region of 5mm of rain fell at the track overnight leaving "areas of false and unstable ground" and forcing the cancellation of a seven-race card, headlined by the rescheduled Grade 2 Cleeve Hurdle.

The going at Musselburgh is soft, good to soft in places ahead of a seven-race card, while the going at Leopardstown ahead of the first day of the Dublin Racing Festival is yielding to soft on the chase course and soft to heavy on the hurdles course.

Officials at Carlisle confirmed the track has passed an inspection ahead of Monday's card but another inspection is due for Monday morning at 8am with frost forecast on Sunday night.

Musselburgh (races Sunday too)
Soft, good to soft in places
Outlook: A windy week with potential for between 18-40mm of rain from Tuesday to Friday. Small chance of snow but expected to be limited to higher ground

Musselburgh
Good to soft
Outlook: An inspection will be held at 8am on Sunday morning due to the threat of overnight snow and frost with temperatures not expected to rise above 2C. Clerk of the course Bill Farnsworth: "Even a centimetre of snow would cause us a huge problem"

Carlisle
Heavy
Outlook: Inspection on Saturday passed but another called for 8am on Monday with frosts forecast on Sunday night.

Plumpton
Heavy
Frost sheets deployed on takeoffs, landings and vulnerable areas
Outlook: Dry and bright on Friday with showers on Saturday. Temperatures dropping to a max of 2C on Sunday with possibility of snow

One horse, one jockey, one trainer and one race to watch on Saturday

Confirmed runners and riders for the Irish Champion Hurdle on Saturday