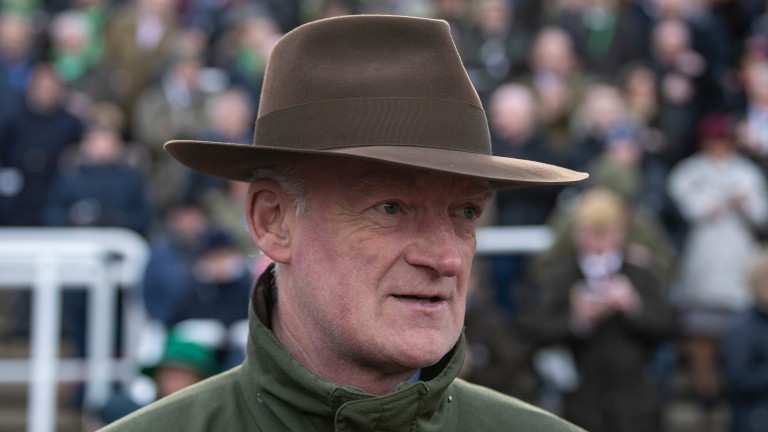 There is only one place you could possibly start here and that is with Willie Mullins, who has won four of the last six runnings, most notably with subsequent Albert Bartlett and Stayers' Hurdle winner Penhill in 2016.

The champion trainer relies on Dark Voyager this time. The four-year-old was an even-money favourite to defeat the smart Zanahiyr in a maiden hurdle at Ballinrobe in October but was beaten two and a half lengths by the now 146-rated hurdler.

We have only seen Dark Voyager three times since then and the most recent of those appearances was a winning one at Tipperary in May when he pulled 26 lengths clear of Easca Peasca, who had RPRs of 123 and 120 on his CV going there.

Dark Voyager won a 1m4f Flat handicap at this meeting last year on soft ground so obviously likes the place and he ought to take a bit of stopping under Paul Townend.

To add to his claims, Townend nominated him as his best chance of a winner on Galway Plate day in his Ladbrokes blog, saying: "My best chance of the day is Dark Voyager. He started out over hurdles last year with a good second but his form just petered out a little bit after that.

"However, we think he has matured a lot since then. He's still only a four-year-old so gets that allowance and I think he will be a smarter horse this year."

Off Your Rocco is unbeaten and open to any amount of improvement, while John Ryan described Ferdia as a "real classy horse, a real smasher" after he won a rated novice hurdle at Tramore this month.

Persia is consistent and rated 120 so you know what you're going to get from him, but he is vulnerable to something above average and similar comments apply to the 119-rated Wouldn't You Agree.

Suprise Package is not that anymore. The cat came out of the bag at Punchestown when he won the Irish EBF Auction Hurdle Series Final in fine style by six lengths. His official mark of 126 puts him right in the mix.

Denise Foster, trainer of Off Your Rocco
He's quite a nice horse and there's more to come. He's had a nice break and, while he's got his inexperience to overcome, we're hoping for a nice run.

Peter Fahey, trainer of Suprise Package
He ran a cracker at Punchestown and the way he travelled through that suggests dropping down to two miles won't be a problem for him. He's a very nice horse and he'll run a very big race.

Joseph O'Brien, trainer of Persia
He ran well enough the other day at Ballinrobe and seems to have been in good form at home since. The ground might be slow enough for him though.

Willie Mullins, trainer of Dark Voyager
He won a Flat race here and will like this ground. He was impressive at Tipperary last time and should be a big player.

FIRST PUBLISHED 6:00PM, JUL 27 2021
He was impressive at Tipperary last time and should be a big player here