Next up: key quotes as Palace Pier and Baaeed do battle in heavyweight clash 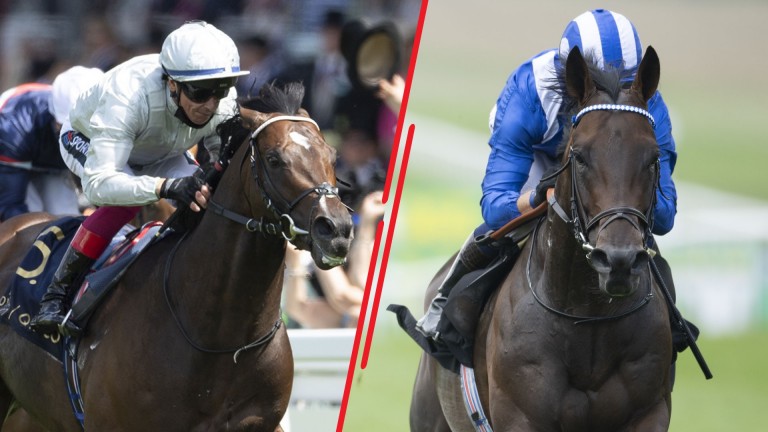 Palace Pier (left) and Baaeed: milers clash in the QEII Stakes at Ascot on Champions Day
1 of 1
By Tom Collins and Richard Birch UPDATED 2:36PM, OCT 16 2021

Palace Pier is horseracing's equivalent of Muhammad Ali. Both were an almost unstoppable force in their prime and had an air of invincibility before suffering their first defeat on the main stage – Madison Square Garden for Ali against Joe Frazier and this race last year for Palace Pier.

But one tell-tale sign of a champion is that they make amends to regain superiority and, as Ali did in his second fight against Frazier, Palace Pier returns to the QEII in order to clean up the mile division.

An official rating of 125 places Palace Pier in the fourth-place slot in the Longines World's Best Racehorse Rankings and five Group 1 successes in just ten career starts show his consistency at the top level.

Palace Pier has left the likes of Pinatubo, Alpine Star, Lope Y Fernandez and, more recently, Poetic Flare trailing in his wake throughout his career and simply has a bigger engine than any of his regular rivals.

The QEII was the race that got away last October. John Gosden decided to let Palace Pier take his chance despite monsoon-like autumn conditions leaving the Ascot turf sodden, and rider Frankie Dettori's race plan arguably went out the window in the first stride.

Palace Pier broke uncharacteristically awkwardly and found himself last of a well-grouped field after a furlong. Dettori bided his time but raced without cover for much of the race and was forced to go for home far sooner than Palace Pier had done before.

Despite hitting the front briefly with two furlongs to run, which was a massive achievement in its own right given his early position, Palace Pier eventually faded into third. Not only did the start and ground go against him, but the loss of his left-fore shoe blunted his finishing effort.

With quicker ground guaranteed and a perfect four-race unbeaten 2021 campaign, Palace Pier must have a favourite's chance of completing the mile series.

Although last year's winner The Revenant, who surely needs deeper ground, and fourth Lord Glitters reoppose, Palace Pier largely faces a group of milers he has never tackled before. That team is headed by Baaeed, who has drawn comparisons with the great Frankel after five effortless victories to begin his career.

There is no denying the impressive visual impression left by Baaeed, especially when he romped home by six and a half lengths under minimal urgings from rider Jim Crowley in the Group 3 Bonhams Stakes at Goodwood in July, but such hype should be put on the back-burner given that the strength of his form remains under question.

He can only beat what is put in front of him, but Baaeed's biggest giantkilling is the defeat of the 118-rated Order Of Australia, who subsequently finished last of 12 in the Turf Mile at Keeneland, and 115-rated Snow Lantern, who also failed to beat a rival on her next outing in the Sun Chariot.

The William Haggas-trained three-year-old didn't show the same va va voom in the Moulin and now faces a champion in Palace Pier. We will learn just how good he is here.

Charlie Appleby and Andrew Balding have been fighting out the trainers' title all year and are represented by Master Of The Seas and Alcohol Free respectively.

Both have plenty to find on ratings but a line through the recently retired Poetic Flare gives them sound each-way claims in a thrilling QEII.
Race analysis by Tom Collins 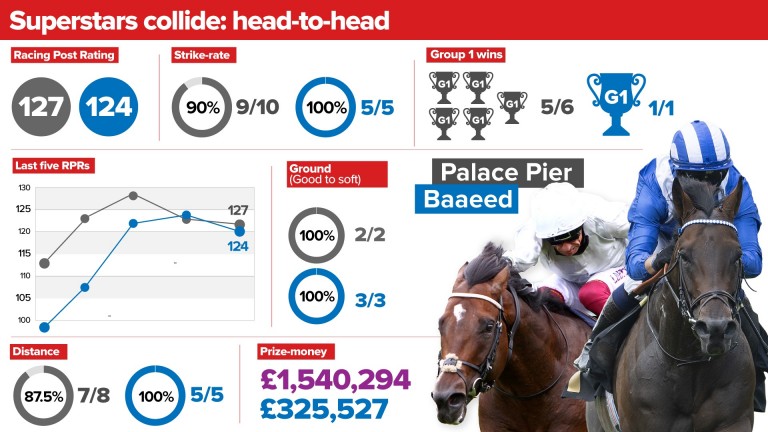 Palace Pier, whose sole defeat in ten starts came in this race last year, is reported in top shape for his battle with Baaeed, a titanic showdown which has got an entire sport talking.

The Kingman colt has landed all four starts this season, most recently the Group 1 Prix Jacques le Marois at Deauville in August, since when he's been put away with the Queen Elizabeth II Stakes as his principal objective.

When Frankie Dettori speaks most people listen, and the Italian is adamant Palace Pier is the best miler he's ridden.

There's a significant chance he might need to be to counter the threat posed by fast-emerging potential superstar Baaeed, but Palace Pier fully merits his position as best miler in training and it's up to his year-younger rival to depose him.

"It looks a top-notch race and obviously he hasn't run since Deauville in August as we've been waiting for this," Gosden said.

"He's been training very nicely on the Limekilns of late and we're hopeful of a good showing. The only time he's ever been beaten was when he pulled a shoe off leaving the gate in the race last year and cut his leg, and got left in what was horrible ground.

"Hopefully, it's better ground this time and he doesn't get left or pull a shoe off."

The chances are that underfoot conditions at Ascot this time will suit Palace Pier better than 12 months ago and he’s most unlikely to get left at the start or pull a shoe off again.

Racing fans have always been excited by an unbeaten horse who has a high cruising speed, sharp turn of foot, and the priceless ability to surge clear in the final furlong.

Baaeed, winner of all five starts, fits the bill, and it's no surprise he's long been hailed as Flat racing's newest superstar.

The son of Sea The Stars graduated to Group 1 company with honours on his latest start when beating Order Of Australia by a length and a quarter in the Prix du Moulin de Longchamp.

It may not have been achieved in the manner of his six-and-a-half-length destruction of El Drama in the Group 3 Thoroughbred Stakes at Goodwood in July, but that wouldn't have expected to be the case.

The sky remains the limit for Baaeed but first he has to cope with a formidable rival in Palace Pier.

Baaeed's trainer William Haggas said: "He's fine. He's ready to go. We'll see what happens. He's had a good year and this will be his last run of the season.

"It's a cracking race. He has a bit to find on form but we don't know yet what his peak is. We don't fully know the peak of his powers, he's been winning his races so easily. What we do know, though, is that he will certainly have a race at Ascot."

On official ratings Baaeed has 4lb to find with Palace Pier, but the conditions of the race allow him to receive 3lb from the champion miler via weight-for-age.

No hype is needed for this heavyweight clash. It really is a race to savour. In fact, it's a race tailor-made for Champions Day.

The Revenant 'still competitive at the top level'

The inevitable buzz around the 'big two' means they will capture most pre-race attention, but it would be foolish to dismiss this Group 1 as a straightforward match.

French contender The Revenant, who represents Francis Graffard, has a fabulous record in this race, having won it 12 months ago and finished runner-up to King Of Change the previous year.

Both those races were contested in hock-deep ground, which played to the strengths of the six-year-old. However, he also has multiple wins on much less testing terrain, and his strike-rate since being gelded in March 2019 – six wins from ten starts – is impressive.

He put up a typically brave performance last time out when failing by a short neck to clinch the Group 2 Prix Daniel Wildenstein at Longchamp for a third consecutive year – Real World rather slipped his field and enjoyed first run – and will be on hand to take advantage should either of the main protagonists fail to perform to expectations.

Graffard said: "The way he finished at Longchamp showed he is still very competitive at the top level. He hadn't run since May and was probably a little bit rusty.

"The winner got a start on him, but I was very pleased with the horse. He's come out of the race very well. The autumn is his time of year."

Graffard is under no illusions about the task The Revenant faces, however. "I've been impressed by Baaeed, of course, and with Palace Pier in the race again; it's a very strong renewal," he said. "On soft ground The Revenant is a Group 1 horse and he'll be fighting."

Saeed bin Suroor, trainer of Benbatl
He has done well since winning the Joel Stakes and heads to Ascot in good form. This will be a very tough race for him, although the conditions look fine at the moment. We wouldn't want to see any more rain as we would prefer good ground, but he is ready to go again.

Jessica Harrington, trainer of Njord
It's a big ask and it's the last throw of the dice for the season. We'll see how he gets on.

David O'Meara, trainer of Lord Glitters
He loves the track and is an old legend but it looks the hottest QEII I've seen in a while with Palace Pier and Baaeed. We'll be looking to run in for a bit of place money and hopefully he can do so because he seems in good form.

William Jarvis, trainer of Lady Bowthorpe
She's been on the go since the Dahlia Stakes at Newmarket at the start of May, but still seems in very good form at home. This is a very big ask for her, but she certainly deserves her place in the race. She's enjoyed a good preparation since Deauville. It's a great race, and we're looking forward to being in the thick of it.

Charlie Appleby, trainer of Master Of The Seas
He has pleased us since his reappearance third in the Joel Stakes at Newmarket. He is mentally maturing. The hood is removed this time. This is his stepping stone to Del Mar where the Breeders' Cup Mile is his target.

Aidan O'Brien, trainer of Mother Earth
She's in good form. She ran well at Newmarket and has come out of the race well. She's a consistent filly.
Reporting by Richard Birch