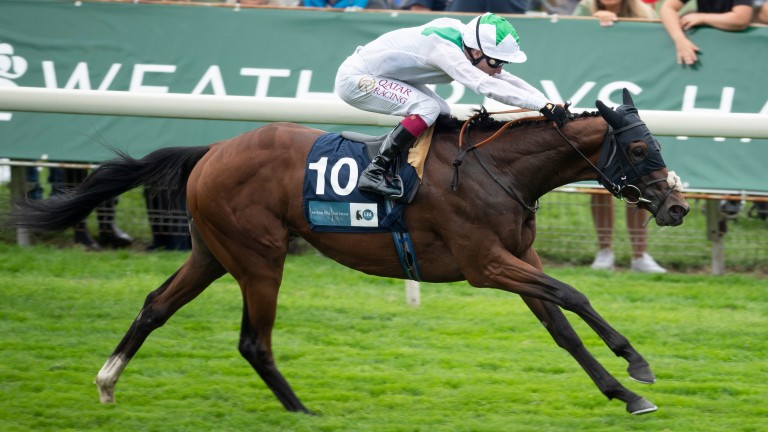 This event is getting stronger as the years go by and the last four winners were Tip Two Win, Sangarius, Molatham and New Mandate. Three of those went on to win in Group company and Tip Two Win was second in the 2,000 Guineas. This year’s race looks another cracker.

Andrew Balding is now rightly considered up there with the best in Britain and the future looks bright for the Kingsclere trainer, who has several promising juveniles.

Hoo Ya Mal looks like another judged on his wide-margin victory in the Convivial Maiden at York’s Ebor meeting last month, but he isn’t the only easy last-time-out winner.

Razzle Dazzle scored by five and a half lengths in a novice race at Newmarket’s July course a couple of weeks ago and was never stronger than at the finish.

Similar comments apply for Ribhi, who ran away with a novice at Salisbury over six furlongs last month and not many Marcus Tregoning-trained youngsters are sharp enough to win first time out. Even Mohaather was beaten on his debut, so Ribhi must be pretty smart.

It’s not just promising novice form on show, though. There are some proven Group performers and Eldrickjones has contested Group 2s on his last four runs.

Berkshire Shadow, Lusail (twice) and Angel Bleu are among his conquerors, but I’d hesitate to say he won’t face anything of that quality because there are lots of potential stars lining up.

Noble Truth also drops from Group company having finished fourth in the Acomb at York last time but he is headstrong and can hang, so a more progressional display will be needed.
Race analysis by Graeme Rodway

Richard Hills, assistant racing manager to Shadwell Estate, owners of Alflaila and Ribhi
Both have nice chances. Alflaila ran well to be second in a nursery at York last time which was even more commendable as he had to come from the widest draw. He should be in the mix again. Ribhi won impressively on debut at Salisbury and shaped as if this extra furlong would suit him. He’s short on experience but a nice type.

Nick Bradley, managing director at Nick Bradley Racing, owners of Eldrickjones
He seems in good form at home and we think six furlongs at York last time was a bit sharp for him. He has a good chance and he’ll be a better horse next year.

Thady Gosden, joint trainer of Find
He had a nice confidence booster when winning nicely at Yarmouth having run into some decent types beforehand. He’s come out of that in great shape and deserves a crack at some black type.

Oisin Murphy, rider of Hoo Ya Mal
He won one of the most valuable maidens of the year at York in good style and has come out of the race in great shape. This is another step up but he should enjoy the track and the ground and I really like him.

Andrea Atzeni, rider of Razzle Dazzle
He was very impressive at Newmarket and should enjoy the track and the ground. He needs to step forward from that but there’s no reason why he can’t and I’m looking forward to getting back on him.
Reporting by David Milnes

FIRST PUBLISHED 6:00PM, SEP 9 2021
This is another step up but he should enjoy the track and the ground and I really like him

Goolwa flies home in Listed feature thanks to in-form Probert's patience Adayar v Mishriff: Graeme Rodway crunches the numbers to reveal who is fastest Can former chaser Jarveys Plate continue his renaissance over hurdles? Cheltenham scorer Galvin faces strong Willie Mullins challenge on Grade 3 return 'She could be dismissed too easily' - five horses to note from Arc weekend Angel Bleu could back up in Dewhurst after Group 1 strike for Frankie Dettori