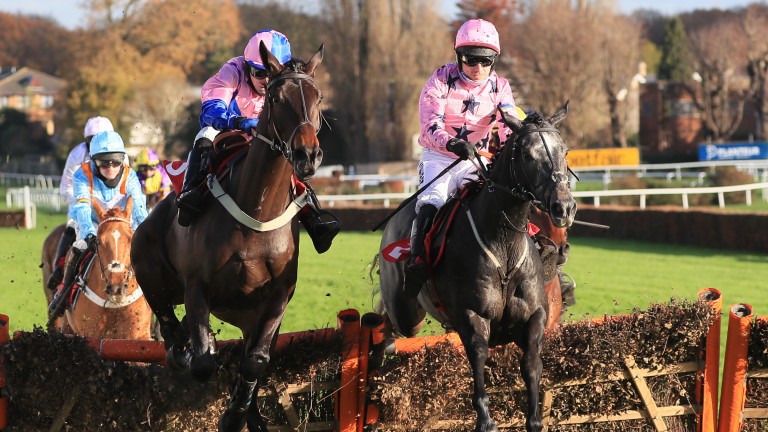 Elham Valley (right): has the best form on offer in the Finale
Mark Cranham
1 of 1
By Keith Melrose and David Milnes UPDATED 7:46AM, DEC 27 2020

The market would have it that virtually all of those that will matter in the Finale will be making their first or second start for their British yards. Even the sole exception among the market principals, Bannister, has run in France the last twice.

The ten-year winning average on Racing Post Ratings for the Finale is 139. Partly because most of the players are new to Britain, there is nothing in this race within 23lb of that standard. While it is expected that juveniles are improving fast at this time of year, that is a pretty extraordinary gap.

Elham Valley is the horse with the best form, and while it is established that it is not saying much, he does have the benefit of having won in deep ground at Sandown. Conditions here are set to be extremely testing, so it is reassuring that this Flat-bred has done it on heavy already.

The buzz horse in the race is Houx Gris. He has won twice in France, most recently and most significantly at Auteuil in October. He had to fight hard that day, but he showed professionalism considering his career only started in the summer. Since then he has fetched €200,000, making him the joint-top lot at Arqana's Autumn Sale.

Someone must fancy the form of his Auteuil win as it seems the first three have all moved to Britain since. Fourth-placed Invite Special had previously finished third at Listed level and was at the time rated roughly the equivalent of 130 by the French handicapper. While the translation is not exact, it is enough to suggest that Houx Gris is not as far off the ten-year standard as first glance would imply.

Also worthy of mention is the sole filly in the field, Marta Des Mottes. She has gone to Tom Symonds, who is having a real breakthrough season since teaming up with David Dennis. She won a claimer at Angers on her hurdling debut, but it was at La Teste De Buch in July where she looked an exciting prospect.

The drawbacks when looking at this race in particular are that the ground will be notably different here, while she also looked a stayer in the making. It is worth pointing out that it is not always speed horses who win the Finale, with Bristol De Mai the most famous recent example.
Keith Melrose, betting editor

Tom George, trainer of Bannister
He's run well in France for us in the past but ran a bit flat there last time, since when we've freshened him up. He's an improving sort and deserves a crack at this.

Oliver Greenall, trainer of Gold Desert
He ran a good race to be second to a hotpot at Doncaster last time when they said the winner eased up, but I don't know if he had that much in hand. He's tough and likes testing ground so it's worth having a crack.

Paul Nicholls, trainer of Houx Gris
He's a new horse to us who has won twice on heavy ground in France, so any more rain won't bother him. He's a very nice horse who has settled in well and it will be interesting to see how he gets on.

Sam Twiston-Davies, rider of Mr Shady
He finished a good second last time when he jumped nicely. He may be a big price but you never know when the ground is this testing.

Nick Williams, trainer of Yggdrasil
I'm not expecting any fireworks as this will be a big test for such an inexperienced horse but hopefully he can take another step up the ladder.

Tom Symonds, trainer of Marta Des Mottes
She's a new horse to us but seems like a nice filly and the idea is to get her some black type. If she ran in a regular novice she would have to carry a double penalty, so it makes sense to have a crack at this as she gets a fillies' allowance.
Reporting by David Milnes

FIRST PUBLISHED 6:00PM, DEC 26 2020
He's a very nice horse who has settled in well and it will be interesting to see how he gets on