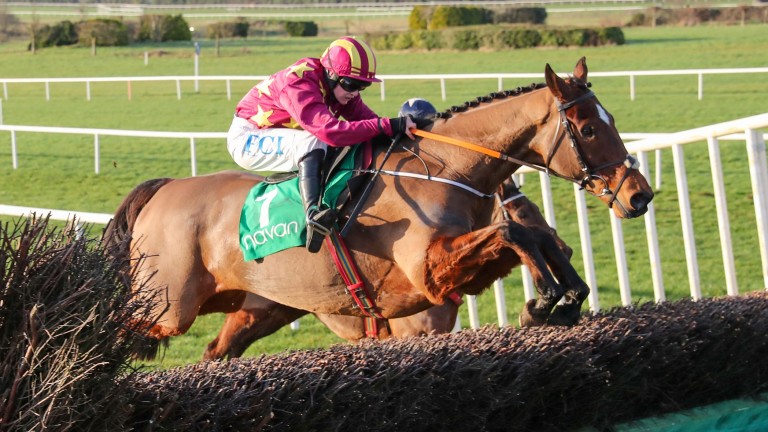 Minella Indo: returns in the feature Grade 3 chase at Wexford on Monday
CAROLINE NORRIS
1 of 1
By Brian Sheerin UPDATED 9:50AM, OCT 26 2020

If every Monday was as good as this The Boomtown Rats would have had nothing to sing about.

A Cheltenham Festival winner, a Gold Cup contender, exciting recruits to chasing and even a horse Gordon Elliott nominated as his dark one to follow this season in a recent stable tour, there is a little bit of everything on offer at Wexford.

Minella Indo may well have frightened off much of the opposition in the feature Grade 3 MW Hickey Memorial Chase (3.15), but it should be a belting race with festival winner Milan Native no slouch.

Milan Native bolted up in the Kim Muir at Cheltenham and took advantage of favourable race conditions at Galway this month when grinding past Discorama.

He has more experience over fences than Minella Indo, last seen when reeled in late on by Champ in a thrilling RSA Chase, but there is 11lb between the pair on official ratings.

Henry de Bromhead's seven-year-old has to give 5lb to a racefit Milan Native, and although he is quite a gross horse who reportedly comes to hand with racing, Minella Indo is fit and ready to do himself justice on his return, according to his trainer.

De Bromhead said: "He's in good form at home and is working well. It's his first run of the year and he always improves as the season progresses, so we'll see. It looks a nice race to start him off in and we're looking forward to it.”

Minella Indo is a general 14-1 chance for the Gold Cup and, given bookmakers’ tendency to shorten Cheltenham fancies after they advertise their wellbeing, expect that price to be trimmed a couple of points should De Bromhead’s chaser make a winning return.

Andy Dufresne is another with Cheltenham targets. Elliott opted to sidestep the festival last season with the exciting youngster who will jump a fence for the first time in public in the Garry Flood Landscaping Beginners Chase (3.50).

Frank Berry, racing manager for owner JP McManus, said: "We're looking forward to starting him off over fences. Gordon is very happy with him and says he's schooled well. We're just hoping for a good round of jumping and we'll take things from there.”

McManus also runs Ilikedwayurthinkin in the race and, on his chances, Berry added: “He jumped a bit sketchy the last day at Galway, so he'll need to brush up on that to have a say.”

Elliott will be hoping to get his week off to a flyer in the opening maiden hurdle (12.55) with Homme D'un Soir, a horse he put forward as a dark one to follow in his Racing Post Stable Tour.

Free bets can be used on singles and each-way singles only. Free bet stakes are not returned. Eligibility and further T&Cs apply. Claim the offer here