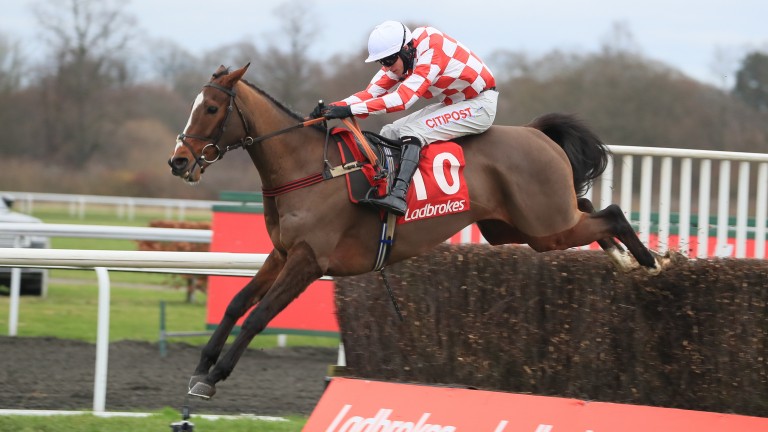 The legendary Sir Peter O'Sullevan, in whose honour this race is run, would have found this an intriguing puzzle to solve.

He would also have needed to put his eagle-eyed vision to maximum use during the contest as owner JP McManus is represented by three of the 15 runners, Dame De Compagnie, Lock's Corner and Kapcorse, all sporting the late commentator's silks.

The first-named carries top weight, but might not be harshly handicapped as she is officially rated 3lb lower than when landing an Ayr novice chase in January.

Highly progressive over hurdles during the 2019-20 campaign, crowned by her victory in the Coral Cup, she remains thoroughly unexposed as a chaser as this will be only her fourth start at this discipline.

Lock's Corner has been well beaten in five handicap chases since defeating Duke Of Navan by a length and a quarter at Stratford in May. As a result, his mark has dropped 10lb from 144 to 134, and he's now 6lb lower than for his latest success.

Kapcorse is interesting, too. Winner of this contest in 2018 as a five-year-old when easily beating Brelan D'As – who also raced in the McManus silks – by ten lengths, he has been lightly campaigned since, and is only 3lb higher now.

He failed to cut much ice in the race 12 months ago when sent off at 13-2, but clearly wasn't right afterwards as this will be his first run since.

Away from the McManus runners, Killer Clown looks of serious interest for the bang-in-form Emma Lavelle stable. A comfortable winner of a Kempton novice handicap chase on Boxing Day last year, he gives the impression he's still capable of scoring off a mark of 138 and should be spot-on after an Aintree lung-opener behind Allmankind.
Race analysis by Richard Birch

Bellamy on course for best season

Tom Bellamy has thrived this season and Killer Clown could help him on his mission to surpass his best tally of 37 winners achieved last season.

The jockey has enjoyed a productive spell since linking up with the seven-year-old's trainer Emma Lavelle and said: "Hopefully the cheekpieces will help Killer Clown as he was a bit disappointing at Aintree last time. We were all a bit disappointed after that but looking back he didn't actually win until Boxing Day last year so he may well have needed the run.

"He's off the same mark as when he was second in the Greatwood Gold Cup so hopefully he can step forward from that."

Bellamy, who is on 26 winners for the campaign, also has strong claims earlier on the card with the Alan King-trained Nina The Terrier in the opening mares' novice hurdle.

Nicky Henderson, trainer of Dame De Compagnie
She's a very good mare having won a Coral over hurdles and has proved her ability over fences too so she should have a good chance.

Philip Hobbs, trainer of Kalooki
He started last season very well by winning here and any further rain will help him. He was a bit late coming back in so should improve and he enjoys going left-handed.

Paul Nicholls, trainer of Grand Sancy and Kapcorse
Grand Sancy needed his last run as he was quite big and stuffy and never really got involved. I'd like to think he's in better shape now as he's a lot fitter. He's got an each-way chance if he runs to his best. Kapcorse ran in the race last year and won it three years ago. We had monumental problems trying to get him right last season, which didn't work out, but we've got him in a good place. If he's anywhere near back to his best, he'd have an each-way chance too.

Jonjo O'Neill, trainer of Lock’s Corner
He's been a bit of a disappointment this year and we're just hoping he can turn a corner in this.

Joe Tizzard, assistant trainer of Ofalltheginjoints
He ran well for a long way in the Badger Beer last time and perhaps didn't get the trip, so dropping him back should suit. It's competitive but it looks the right race for him.

Sam Twiston-Davies, rider of Topofthecotswolds
He ran a nice race last time but it's a tough race. While the ground is as it is, hopefully he can run okay.
Reporting by David Milnes

3.00 Newbury: trainers and jockeys on their Ladbrokes Trophy contenders at Newbury

FIRST PUBLISHED 6:00PM, NOV 26 2021
He's off the same mark as when he was second in the Greatwood Cup so hopefully he can step forward from that

'Kim would have loved it' - Colin Tizzard to give grandson debut ride on Sunday Another festival ace? Nicky Henderson's Walking On Air stakes Ballymore claim 'He's a strong stayer so the hill at Cheltenham will definitely suit him' Will a return to Newbury spark a revival for former winner Django Django? Our man advised 4-1 and 7-2 winners in the last week and is back with four bets Newbury Placepot tips: Graeme Rodway gave a winning perm at Chepstow on Monday