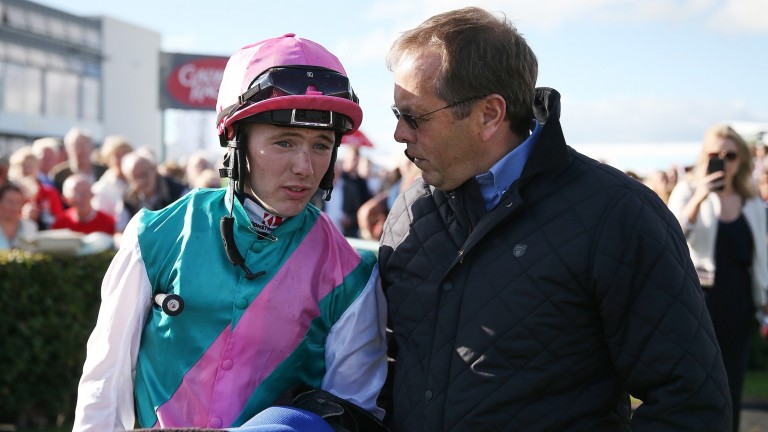 Aidan O'Brien has won this Listed prize for three years on the trot but not always with the stayer we expect.

Wordsworth was 8-15 last year but couldn't fend off the late surge of lesser fancied stablemate Sir Lucan, who won by a neck at 11-2, and the presence of Shark Bay as well as the unbeaten Arbutus muddies the waters a little for punters this time.

Given he was allowed to go off at 12-1, Arbutus obviously surprised O'Brien when making a winning start to his career in a maiden over this course and distance last month, leading home a 1-2-3 for the stable despite being the outsider of the three.

The Galileo colt has been pitched straight into a Listed race so must have done well in the interim.

Shark Bay has far more experience than Arbutus, and arrives here just seven days after chasing home the impressive Ruler Legend at Naas over 1m2f. He is up in trip and tries cheekpieces but a mark of 90 suggests he has plenty to find on the figures.

The obvious one is Cairde Go Deo. She brings a rating of 97 to the party and and traded at evens in running on Betfair when third to leading Oaks fancy Concert Hall in the Listed Salsabil Stakes at this venue last month.

That was over 1m2f so she has three more furlongs here but she did run all the way to the line there and fended off Tranquil Lady for third.

That form has been franked since as the Joseph O'Brien-trained filly is now a single-figure price for the Oaks having won impressively at Naas last weekend. If Cairde Go Deo stays, she looks the most likely winner.

Willesee has half a length to find with Shark Bay from their clash at Naas so needs to find significant improvement, while Hotter Than Hades is only rated 78 so the fact Jack Davidson runs her here rather than in a maiden is intriguing.

Hotter Than Hades might outrun her odds but she still has 19lb to find with Cairde Go Deo, who looks to have been found a glorious opportunity by Ger Lyons.

The fly in the ointment might just be Selador, who chased home Lily Pond in a Dundalk maiden on her debut last month. Joseph O'Brien would have thought twice about stepping her up in class for this, so her presence is very interesting indeed.

Jack Davidson, trainer of Hotter Than Hades
It's ambitious but it wasn't a decision that was made lightly. She's crying out for a step up in trip on a more conventional track and she's come forward hand over first from her Tipperary run. I really do think she will vindicate my decision to run her in it.

Joseph O'Brien, trainer of Selador
She had a nice run on debut and has come forward from that. We've decided to let her take her chance in Listed company in the hope of getting some black type. Hopefully she can run a nice race and progress from Dundalk.

Jessica Harrington, trainer of Willesee
She's a nice filly and ran well enough at Naas. She's up in trip here but seems in good form.

Ger Lyons could be on the Classic trail again with classy Cairde Go Deo Watch now: follow all of Saturday's ITV Racing action on Racing Post Live ITV Racing tips: one key runner from each of the seven races on ITV on Saturday 'I think he's still well in' - who fancies their chances in a big-field sprint? The trials may be over - but a late Oaks contender could still emerge at Newbury 'She is potentially very exciting' - big-race views ahead of Saturday's action