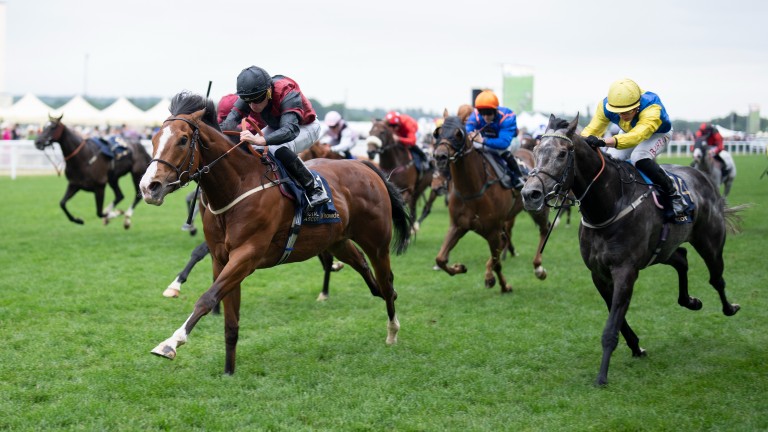 The Bengough Stakes provides the ideal opportunity for British speedsters to warm up for the Champions Sprint and six of these have the Group 1 option over the course and distance in a fortnight's time.

Surprisingly it is the beaten runners who have fared better than the winners on Champions Day in recent years. Two of the last three Champions Sprint scorers, Glen Shiel and Donjuan Triumphant, were beaten in the Bengough and no horse has completed the double this decade.

Rohaan is the only Bengough contender available at single-figure odds for the Champions Sprint and David Evans has selected a simpler task for his stable star than the Prix de la Foret over seven furlongs at Longchamp on Sunday.

There is plenty to like as Rohaan handles ease in the ground, drops in class, is three from four over this course and distance and has recorded his two best performances on Racing Post Ratings here. Course form is always a key factor at the Berkshire track and he is the right favourite.

The average winning Racing Post Rating awarded to a Bengough scorer in the last decade has been 114, and Rohaan ran to an exceptional 120 and 119 when winning the last two runnings of the Wokingham. However, big RPRs gained via weight-carrying performances in handicaps can sometimes flatter to deceive.

Of the other five Group 1-entered runners, Vadream is worth highlighting at a big price. She won this last season and although she has finished down the field in three of her past four starts, she knows how to turn it on at Ascot and relishes ease underfoot.

The other overpriced one could be Ehraz, who lacks any fancy entries but his pedigree suggests there could be some improvement for slower ground. The Richard Hannon-trained colt is unexposed, likes this course and distance and is fresh following a 106-day break.
Race analysis by Robbie Wilders

'This wasn't the plan for Rohaan'

Trainer David Evans has deviated from the plan by running Rohaan here rather than waiting for the Champions Sprint in a fortnight.

The Group 1 back at Ascot on Qipco British Champions Day remains the primary objective, but the trainer decided this Group 3 was too good an opportunity to miss.

"It wasn't really the plan to run here but the race was there and it looks winnable if things go his way," said Evans. "He takes his racing well and seems in good order. It's a nice race to go for two weeks before the big one."

Rohaan completed back-to-back victories in the Wokingham in June – over this course and distance – under an expert Ryan Moore ride, but with that jockey at Longchamp, Andrea Atzeni is called up for the first time.

Rohaan also has a change of owner since his last run when third in Haydock's Sprint Cup as he returns to racing in the colours of Kieran McCabe.

"He likes Ascot, good ground will be fine and any more rain wouldn't be an issue and might inconvenience a few others," added Evans.

The ground at Ascot could be soft on Saturday following a period of rainfall. The going as changed to good to soft, good in places during racing on Friday but conditions are expected to improve on Saturday.

"It's been spitting with rain," clerk of the course Chris Stickels said on Friday. "The forecast was for 10-11mm and if we get that, it's likely to be soft on Saturday."

Charlie Appleby, trainer of Al Suhail
We're trying something a bit different but he shows a lot of natural pace and this looks a good opportunity to try him at this trip. He goes into the race in good order with conditions to suit and this could potentially open a few more doors for him.

Michael Dods, trainer of Commanche Falls and Gale Force Maya
It's a big step up for Commanche Falls. We're going up to a Group 3 after carrying top weight in two big handicaps and there is a big difference, so we'll see how he copes. Gale Force Maya has been running in fillies' and mares' races, so it's a big step up for her as well taking on the males. She deserves to though, after a tremendous season.

Clive Cox, trainer of Diligent Harry
I hope it doesn't get too wet for him as he likes good ground or quicker ideally. He ran a bit flat at Newbury last time.

David O'Meara, trainer of Summerghand
He was a brilliant winner of the Ayr Gold Cup but I'd be concerned about the amount of rain forecast. His best form has come on quicker conditions and he didn't run very well at Newmarket on slow ground before Ayr.

William Haggas, trainer of Perfect News and Tiber Flow
Perfect News is quite good and if the rain comes she’ll run a good race. She's drawn in one and the stalls are on the stands' side, so I have a suspicion that’s going to be a bad place. I think the drop back to six and the cut in the ground will suit Tiber Flow. He needs to run well to go on, otherwise we’ll put him away for the year, but he’s in good form.

Hugo Palmer, trainer of Flaming Rib
He's run well at Ascot before, including when second in the Commonwealth Cup. He's very versatile with regard to the ground, so any rain wouldn't hinder his chance.

Charlie Fellowes, trainer of Vadream
She's been in and out of form this year, but all her best form is on ground with plenty of cut and we've just not had that. The one time she got it she ran a blinder when just touched off in a Listed race at Newmarket. She loves Ascot and we'll be hoping they get bucketloads of rain.

Tim Palin, racing manager to Middleham Park Racing, owners of Ventura Diamond
She's ground dependent and needs a bit of juice. She ran well at York and was third in this last year. She's drawn 14 of 14, which is arguably pole position on the straight course, and she has a lively outsider's chance.
Reporting by Andrew Dietz

3.25 Longchamp: Aidan O'Brien: 'Kyprios is a good-moving horse, so hopefully it's not too soft'

FIRST PUBLISHED 6:00PM, SEP 30 2022
He takes his racing well and seems in good order, and it's a nice race to go for two weeks before the big one