Is Real World the real deal or will it pay to stick with the solid option? 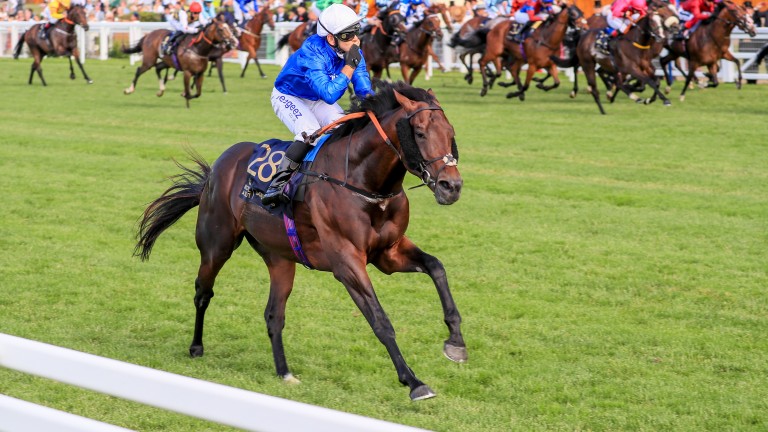 Real World poses punters one of the toughest conundrums of the weekend. If he runs to the same level as when bolting up in the Royal Hunt Cup at Ascot last time he will almost certainly win again. But this is such a different test around a bend over two furlongs further.

His form around a bend over further than a mile doesn't match up to his Ascot effort, either. His highest Racing Post Rating over a mile and a quarter is just 92 – 21lb lower than he achieved last time – but that was on dirt and maybe he is just a better horse on the turf.

We may get an answer to that because he was having his first start on grass when scoring at Ascot. Was it the change of surface that proved the catalyst for such dramatic improvement or was it something else? Maybe the mile trip or the straight course? We should find out here.

If Real World isn't the real deal then maybe it will pay to stick with the solid option Solid Stone. He had the reopposing Stormy Antarctic behind when landing a Listed race at Windsor in May, but was below form when third in the Wolferton at Royal Ascot at this trip last time.

He is penalised for his Windsor win, but has made the first three in six of his last seven starts and will feature high on the list for Placepot punters. He is vulnerable to improvers, though.

The two three-year-olds come into that category. Both Derab and Movin Time have improved their RPRs with each run and Derab achieved the highest figure (106) of the two last time when beaten six lengths behind St Mark's Basilica in the Prix du Jockey Club at Chantilly.

That leaves him with 7lb to find with Real World, but a 9lb weight-for-age allowance will help and three of the last ten winners were three-year-olds. There should be more to come.
Race analysis by Graeme Rodway

Philip Robinson, racing manager to Saeed Suhail, owner of Solid Stone
He has plenty going for him as he'll like the trip and he's training well at home. He ran well when third at Royal Ascot and we'll be disappointed if he's not bang there.

Ed Walker, trainer of Stormy Antarctic
Hopefully the ground doesn't dry out too much as he's so much better with a bit of cut. We'll make a call but if he does run I expect him to run a decent race.

Marco Botti, trainer of Felix
As he's getting older we've found he doesn't want fast ground and it may well have been too quick for him at Royal Ascot last time. He's improved from that and although it's a tough race, the track and ground should suit him.

Silvestre de Sousa, rider of Fox Tal
He ran well to be second to Euchen Glen last time but I don't think we've seen the best of him yet this season. He'll run his usual race and the track should suit him.

Saeed bin Suroor, trainer of Real World
We dropped him in trip for the Hunt Cup at Royal Ascot and he won well and has been in good form since. He won't mind going back up in distance and Marco Ghiani again takes the ride.

Thady Gosden, joint-trainer of Derab
We had wanted to run him in a Listed race at the Newmarket July festival but he didn't eat up. He's fine again now and should enjoy the trip. He was drawn very wide and could never get involved in the French Derby last time but we just hope the ground doesn't dry up too much.

Roger Varian, trainer of Movin Time
Things didn't really pan out for him at Royal Ascot last time but we've been pleased with him at home since then. Hopefully he can step up on that in what looks a strong race.
Reporting by David Milnes

FIRST PUBLISHED 6:00PM, JUL 16 2021
He ran well when third at Royal Ascot and we'll be disappointed if he's not bang there