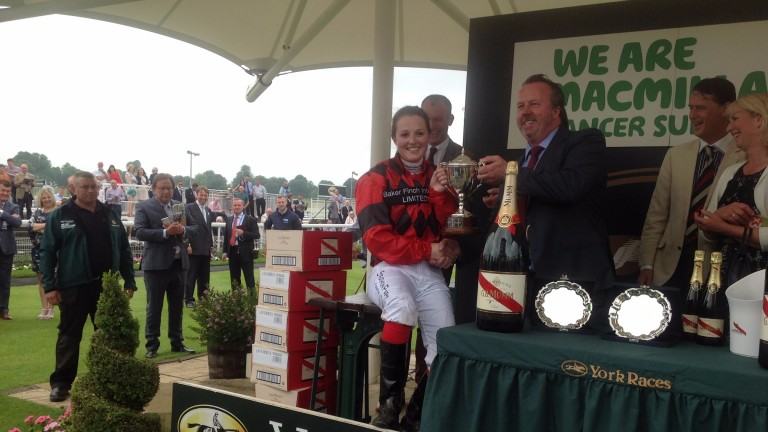 This race is confined to female amateur riders and the general consensus appears to be that ability and experience in the saddle will play a bigger part in deciding the outcome of this race than it would for any other. However, recent results suggest that's a misconception.

In the ten runnings since 2010, less experienced riders have outperformed the more established female amateurs and that is clear when breaking down the results by jockey claim. Riders who, prior to June 9, 2021, had not ridden more than five winners can claim 3lb, while those who have yet to ride a winner get a 6lb allowance.

The mounts of jockeys who claimed 6lb, and who therefore were yet to ride a winner, have performed best on almost all counts. They have a higher strike-rate of nine per cent (2-21), compared to around six per cent for more experienced riders, and their mounts beat 57 per cent of their rivals. Riders who didn’t claim were nine per cent lower at just 48 per cent.

Furthermore, the actual/expected (A/E) winners figure for riders who claimed 6lb comes in at 1.61 and that suggests their mounts have been underestimated in comparison to those ridden by amateurs who didn’t claim. Horses ridden by jockeys without an allowance have an A/E figure of just 0.88, which is further evidence the market overvalued experience in the saddle.

It is only a small sample, but a literal view of these figures suggests there isn’t much between the riders in terms of ability and therefore it’s the jockeys' claim that proved decisive.

So forget the amateur stars and concentrate on the one rider this year who will be claiming an allowance. Rosie Haworth takes the full 6lb off Flymetothestars and that may prove crucial.
Race analysis by Graeme Rodway

Serena Brotherton, who has 126 winners from 800 rides on the Flat, always looks forward to the Queen Mother’s Cup.

"It's one of the two really special races for female amateurs – Ascot on King George day is the other," she said. "I'm just disappointed the race was so poorly supported this year with only eight runners. 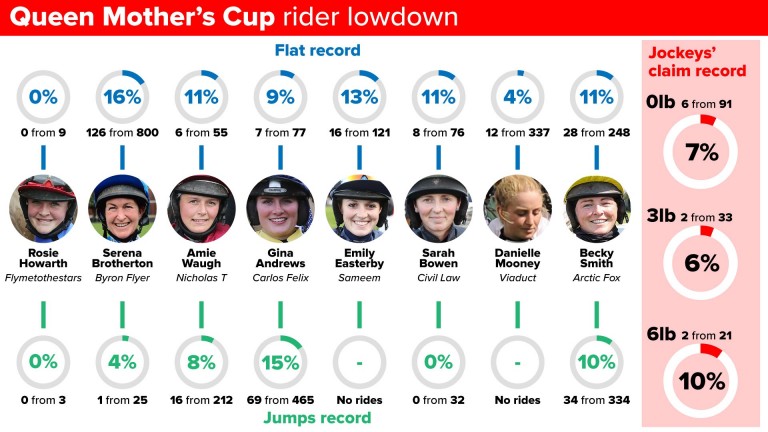 "York is my home track and I rode my first winner there. I've won the race three times, most recently on Pearl Castle seven years ago."

Brotherton is hopeful Byron Flyer can give her a fourth success, and added: "He ran well last time, and has generally been competing in better races. I'm hoping the visor will offset the drop in trip for him."

Gina Andrews, rider of Carlos Felix
I'm not very good on Flat form, but I see he's one of the youngest in the race so hopefully he's open to the most improvement. The Queen Mother's Cup is a great race for us girls to ride in – this race and the one at Ascot are the two special ones. I've won the Ascot race, and would dearly love to win this one.

Emily Easterby, rider of Sameem
It's definitely my favourite race of the year. I won it in 2016 and was second the following year. The races at York and Ascot are the two opportunities for amateurs to ride nice horses – most races for them are normally 0-75s. It's a great opportunity, and Sameem should run really well. He feels great at home.

Martin Todhunter, trainer of Arctic Fox
She ran well at Ayr last month and has come on a bit for the run. I think she's got a good chance of winning the race again. She's won twice on good to firm.
Reporting by Richard Birch

FIRST PUBLISHED 6:00PM, JUN 11 2021
I'm just disappointed the race was so poorly supported this year with only eight runners

Pyledriver '100 per cent sound' and on course for Juddmonte at York Armory tees up Arlington Million tilt by taking on Mohaafeth in Group 2 Thady Gosden can't see a handicapper beaten at Ascot English tracks prepared for return of bumper crowds after easing of restrictions Game on! Bryony Frost jocked up to ride in five-furlong dash for jump jockeys Tony Mullins relishing Ebor test for Gold Cup runner-up Princess Zoe