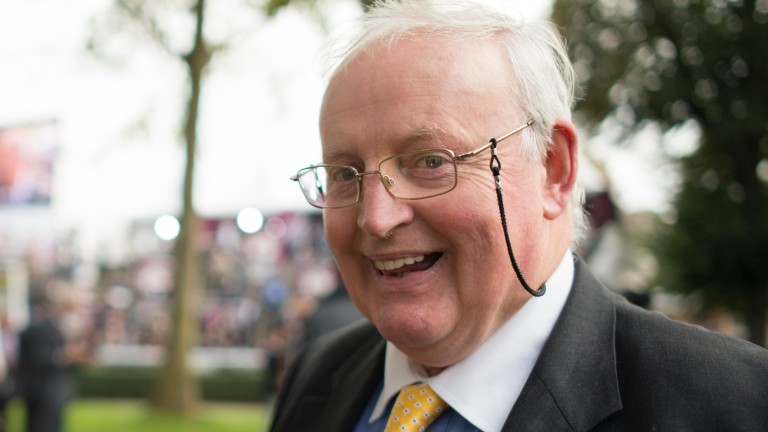 Tom Hogan's eyes must have lit up when seeing his runaway premier handicap scorer Nebo was handed stall one for this extremely tricky contest, as it is an ideal starting position for the classy front runner.

His 50-1 victory at Cork caught plenty of punters off guard earlier this month, but there would be no such surprise if the former Group 3-winning juvenile for Charlie Hills provided Hogan with a ninth Galway festival winner.

The handicapper hit Nebo with a 9lb rise for that clearcut victory, but Ben Coen takes over this time around and his 3lb claim could prove significant. 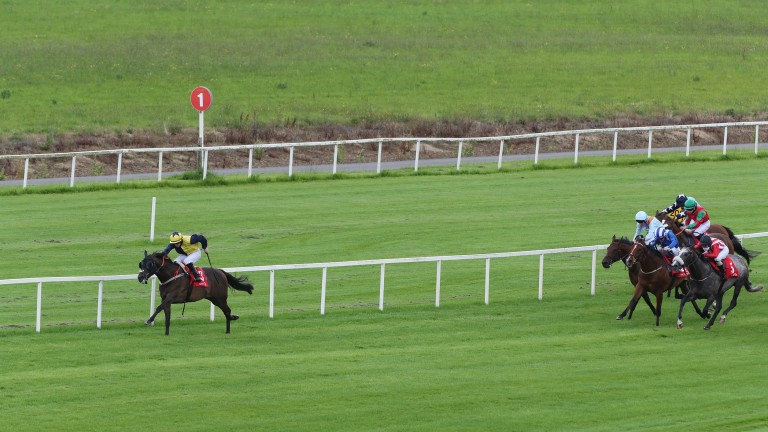 Tuesday's Galway highlight, worth €75,000, will not be plundered easily though. There are no shortage of dangers, including last year's winner Saltonstall, who will bid to emulate Riven Light by winning back-to-back runnings of the prestigious handicap.

The Ado McGuinness-trained Saltonstall overcame stall 14 last year and is in a similar position again from stall 12, with Gavin Ryan's 5lb claim helping offset the fact he is 7lb higher this time around.

Tauran Shaman, trained by Jessica Harrington, was probably not helped by how the race unfolded when coming home well for third behind Nebo at Cork earlier this month, but he has long appealed as one capable of winning a handicap like this. 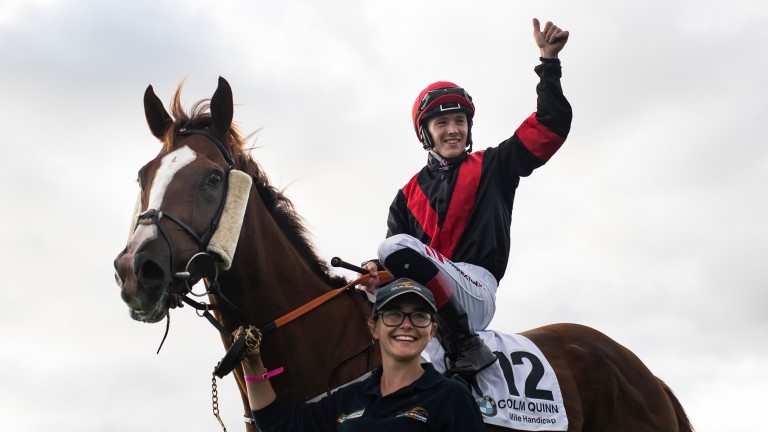 A two-pronged attack of Big Baby Bull and Turbine from the Denis Hogan yard warrants respect, with the former out to defy a 10lb rise for a recent Curragh success.

Ballybrit master Dermot Weld won this valuable race five times across a 20-year period, but his last success came in 2011 with Stunning View.

It would be no shock to see Georgeville, third in last year's Group 3 International Stakes, relish the drop in class having contested stakes races in both starts this season.

Blinkers are now added for the first time and Oisin Orr is tasked with navigating a smooth passage from stall 15, which may not prove straightforward.

Do not rule out a bold showing from Aidan Fogarty's On A Session at a likely juicy price.

He did not get the rub of the green when flashing home for second in last year's Ahonoora Handicap at the festival, and his latest effort at Cork was encouraging.

Dermot Weld, trainer of Georgeville
He's a good colt with a lot of weight, carrying 9st 12lb, but I'm more concerned about his draw in stall 15. He's very well but it's difficult to win from such a wide draw.

Jessica Harrington, trainer of Tauran Shaman, Njord and Onlyhuman
Tauran Shaman has a good chance and has been knocking on the door in some good handicaps this season. I'd like to see the ground dry out a bit for him. Njord is in great form but he's drawn out in the car park [stall 18] and he needs to improve with that, and his 10lb higher mark, in mind. Onlyhuman has a good draw [stall three], will like the ground and if he's able to hold a good position early should be competitive. 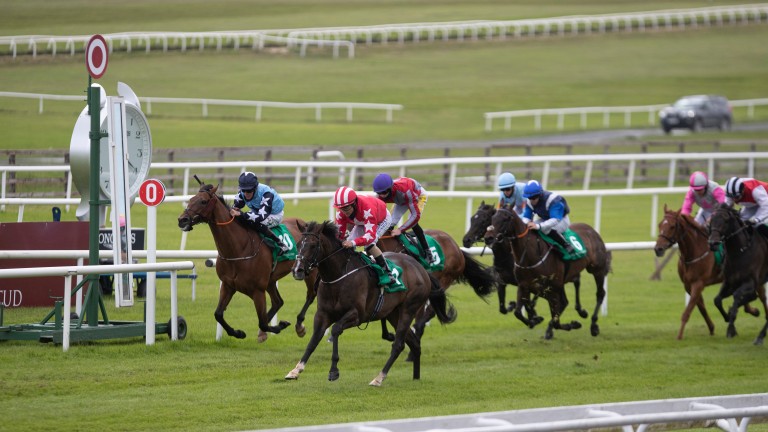 Tom Hogan, trainer of Nebo
We think he's done well since his win at Cork, we've been very happy with him. It's a big ask carrying 10st but he's got a good draw [stall one] and we're hopeful he can produce another good performance. Ben [Coen] has been riding him in all his work and deserves his chance on him.

Ado McGuinness, trainer of Current Option and Saltonstall
The draw hasn't been that kind to either of them. Current Option [stall 19] is a class horse with rock-solid form and he goes there in great shape. He settled well the last day and we're hopeful of a big run from him. Saltonstall [stall 12] obviously won the race 12 months ago and if he hadn't run in the Nasrullah Handicap last time I think he'd nearly be favourite, judged by how he came home in the Irish Lincoln prior to that. It's a very open race but he's got a big chance and we've got the best 5lb claimer in the country on his back to help offset his higher mark than last year.

Aidan Fogarty, trainer of On A Session
He ran very well there last year so he seems to handle the track and we were happy with his run the last day at Cork. A low draw always helps around Galway and he's in stall four so hopefully he can run a big race. 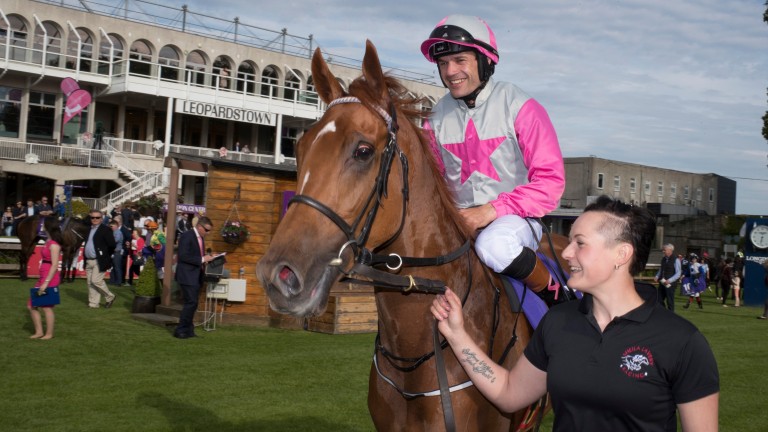 Noel Meade, trainer of Helvic Dream
The draw in stall 20 is a real negative. All along we felt he would stay further and we rode him as if he would at Roscommon last time over a mile and a half, but unfortunately he didn't seem to get home. His owner has had some luck in this race before and we said we'd try him in a handicap once more. Any rain will help his chance, but the draw is very unhelpful.

Sheila Lavery, trainer of Magnetic North
He doesn't have a bad draw [stall ten] and Rory Cleary knows him well, having won the Nasrullah Handicap on him last year. I think he'll appreciate the cut in the ground so we're pretty hopeful he'll be in the shake-up.

Aidan O'Brien, trainer of San Pedro
He seems to be in good form. We're hopeful he's come forward from his last run at the Curragh and that he'll handle the ground.

Gavin Cromwell, trainer of Come September
I think we rode her wrong the last day at Killarney, we made too much use of her. The draw hasn't been overly kind [stall 17] and we'll probably ride her for luck this time and hope there's plenty of pace on. She wouldn't be without a chance on the form of her previous start and she goes there in good nick. If everything falls right for her hopefully she could be thereabouts.

Group 1 sacrifice: Billy Lee accepts quarantine to keep Romanised partnership Alpine Star and Circus Maximus could add extra spice to intriguing Marois clash Take away the crowds and Galway is just a week of mediocre racing BHA chief fears success of appeals could adversely influence jockey behaviour Meade juveniles set to show their worth in the coming weeks Raising the bar: why the stewards need to ask more questions of beaten runners