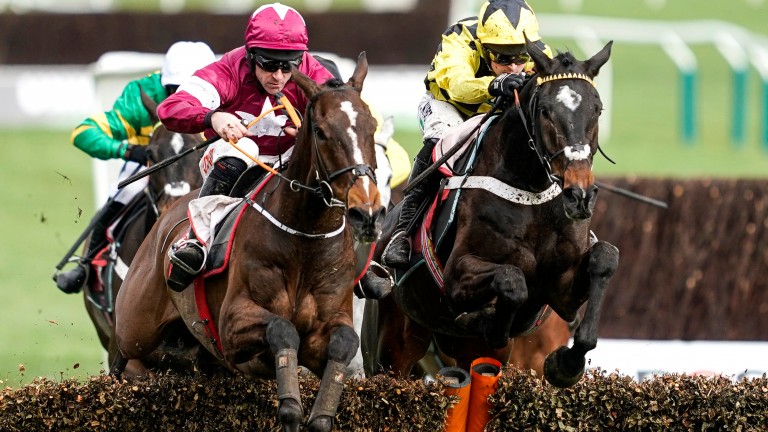 Triple Grade 1 winner Abacadabras is the headline act on a mixed card of quality as he takes on Jason The Militant in an intriguing Grade 3 Horse & Jockey Hotel Hurdle (3.35).

Abacadabras has not been seen since failing to see out three miles in the Christmas Hurdle at Leopardstown in December, but the 2020 Supreme runner-up to Shishkin won the Aintree Hurdle last year and is a class act on his day.

That said, his mark of 153 is 2lb inferior to the classy Jason The Militant and he must give that rival 11lb, so the conditions of the race favour the Henry de Bromhead-trained runner.

Gordon Elliott said: "It won't be easy giving so much weight to Jason The Militant but we're looking forward to getting him started and he is a very talented horse on his day. He seems to be in good form at home but it's his first run for a long time."

Galvin (2020) and Rathvinden (2017) are two recent winners of the Grade 3 O'Dwyer Steel Dundrum Novice Chase (4.45) in which a small but select field of five line up this year.

Among the quintet is the Frances Casey-trained Max Flamingo, who was seventh in last season's Irish Grand National.

Casey, son of Peter Casey, trainer of Flemenstar fame, said: "I'm looking forward to him getting started. He's in great order. He's done a few bits of work and I'm very happy with him but I'm sure he'll take the run.

"He looks a better horse than last year but he probably isn't as fit yet. The intention was to go to the Munster National but if he runs well in this, we'll stay the Graded route where there'll be smaller fields."

Perhaps the most competitive of the three Grade 3s over jumps is the Fitzgerald's Woodlands House Hotel Novice Hurdle (3.00) in which six of the ten runners are last-time-out winners.

Willie Mullins has won six of the last seven runnings and holds a strong hand this time too with wide-margin Galway maiden hurdle winners Champ Kiely and Hubrisko representing the champion trainer. The presence of last season's Boodles winner Brazil adds to the intrigue.

On the Flat, the Group 3 Coolmore U S Navy Flag Concorde Stakes (2.25) has attracted a field of 13 and Ado McGuinness will fancy his chances of following up his 2020 win in the race with Current Option. He also runs Casanova.

The recent rain could have a negative impact on a few in the race but it won't inconvenience Belle Image, who was fourth in last year's Irish 1,000 Guineas at 125-1.

Trainer Sheila Lavery said: "She's had a lot of niggling setbacks but she seems to be in a really good place now. Given the quality of the race, she will need to be very well, but I'm just absolutely thrilled to have her back and to be taking part in a race of this calibre."

FIRST PUBLISHED 6:00PM, OCT 1 2022
It won't be easy giving so much weight to Jason The Militant but we're looking forward to getting him started

Superb Floueur the centrepiece of Clonmel treble for red-hot Gordon Elliott yard Elliott tempted by Stayers' Hurdle for Teahupoo after 'unbelievable' weekend Can Champion Bumper star Facile Vega maintain unbeaten streak on hurdling debut? Confirmed runners and riders for the Hatton's Grace Hurdle at Fairyhouse 'This is a suitable race for him' - Darasso takes aim at Listed chase 'He's getting better and stronger' - Piper among huge Elliott Leopardstown team