Get the thoughts of Aidan O'Brien before Saturday's Irish 2,000 Guineas 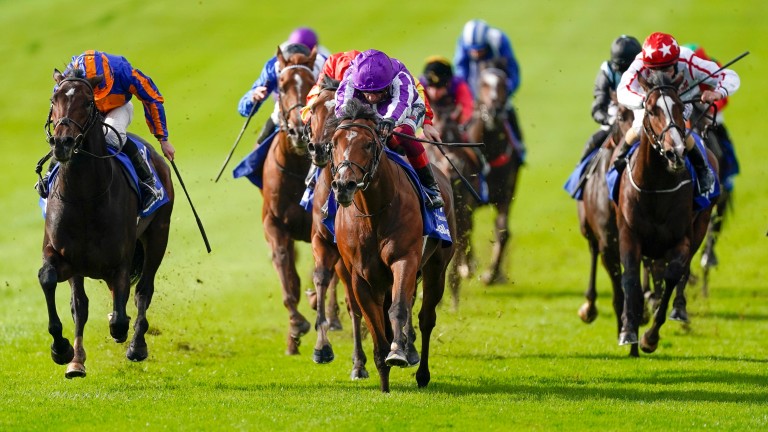 Wembley (left): finishes second to St Mark's Basilica in last season's Dewhurst. Ryan Moore is sticking with him here despite his disappointing run in the 2,000 Guineas
Alan Crowhurst (Getty Images)
1 of 1
By David Jennings UPDATED 2:45PM, MAY 22 2021

Aidan O'Brien thinks the 2,000 Guineas may have come a few weeks too early for his top three-year-old colts and is convinced Wembley and Van Gogh are all better than they showed at Newmarket.

They will certainly need to be if O'Brien is to win Ireland's first Classic of the season for an unprecedented 12th time, but the master of Ballydoyle has not lost any faith in the two colts and is giving them another chance to show what they are made of.

O'Brien said: "Newmarket was maybe a few weeks early and they weren't quite ready in time. None of them fired and they all ran the same sort of race at Newmarket, they didn't finish out their races. We know on form that that wasn't their true runnings. We've often had horses who ran badly at Newmarket and come back to the Curragh and ran big races."

Ryan Moore has stuck with Wembley. The Galileo colt, who is a brother to Johannes Vermeer, was never out of the first two as a juvenile and chasing home stablemate St Mark's Basilica in the Dewhurst looks strong form now given the way that one won the French 2,000 Guineas last Sunday.

Wembley never looked happy in the Guineas at Newmarket and trailed home 11th of 14 behind Poetic Flare yet he arrives here a shorter price than the Jim Bolger-trained colt.

O'Brien said of Wembley: "He has form on soft ground, but we always thought he wanted good ground or faster. We took him out of the Vertem Futurity because of the ground. We've been very happy with his work since Newmarket, he just didn't fire there for whatever reason. Maybe he wasn't quite ready."

Given the Seamie Heffernan-ridden Van Gogh won the Criterium International on heavy ground at Saint-Cloud, he ought to be able to adapt to conditions. 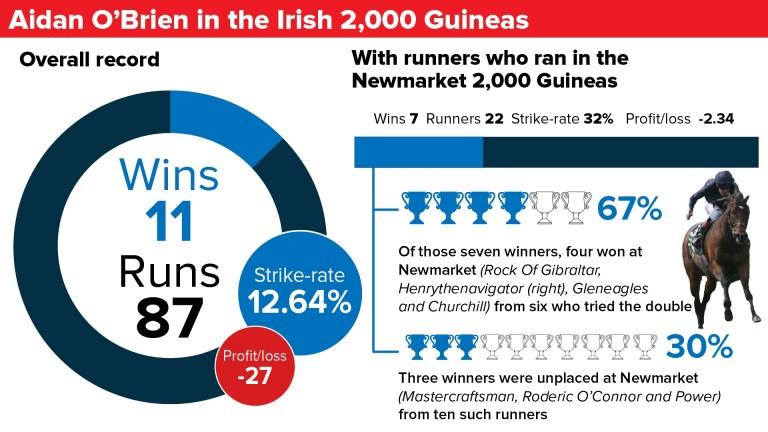 "We will probably step Van Gogh up in trip after this, but we will see how he goes here first. We thought he wanted nice ground but he obviously coped well with conditions in France last year," O'Brien said.

The trainer ruled Battleground out of the race due to the testing conditions.

Charlie Appleby does not believe heavy ground was to blame for La Barrosa's only real blip in the Criterium International at Saint-Cloud in October where he beat one home behind Van Gogh.

That was his sole defeat at two and he looked even better at three when gunned down late by Master Of The Seas in the Craven at Newmarket last month, and his trainer thinks he can be competitive in what looks a wide-open contest.

Appleby said: "He disappointed on testing ground at Saint-Cloud, but we feel there were other contributing factors that day. It was the end of the season and he scoped dirty post-race, so I think you can put a bit of a line through that run.

"His preparation has gone well and he put up a very good performance behind Master Of The Seas on his three-year-old return. A repeat of that effort should make him very competitive."

Jim Bolger has won the 2,000 Guineas at Newmarket twice, but he has never won this Curragh Classic. In Poetic Flare and Mac Swiney he has two top-class colts who could change that statistic.

Just last Sunday Poetic Flare, the hero of Newmarket this month, was finishing sixth to St Mark's Basilica in the French 2,000 Guineas. Things did not go to plan there and Bolger is wasting little time in trying to right that wrong.

As for Mac Swiney, there was a valid excuse for his Derrinstown display at Leopardstown where he trailed in almost seven lengths behind Derby favourite Bolshoi Ballet in fourth spot.

Bolger said: "Mac Swiney had nasal discharge for a week after the Derrinstown, but he has made a quick recovery and we are happy to let him run.

"We have drawn a line through Poetic Flare's French Guineas run. Things didn't work out as we hoped it would – it was a combination of ground and traffic for him – but he still wasn't beaten very far.

"Both horses are well and the ground is what it is for them. We can do nothing about the weather."

Harrington has first Irish 2,000 Guineas in her sights with Lucky Vega

Like Bolger, Jessica Harrington is also going in search of her first Irish 2,000 Guineas success and she won't get many better chances than this year.

Lucky Vega, electric in last year's Phoenix Stakes over 6f at the track, saw out the mile better than many expected in the 2,000 Guineas at Newmarket when storming home to take third behind Poetic Flare, beaten only half a length.

Harrington has issued an upbeat bulletin on his progress since Newmarket and it is no surprise to see him top the market.

Harrington said: "The ground won't suit him, but it's going to be the same for all of them. I've been very happy with him since Newmarket."

Joe Murphy, trainer of Agrimony
Agrimony will be a big price, but we are very happy to have him. The big guns of Ballydoyle always have to be respected, but I don't think our fella will mind the ground. It's a once-in-a-lifetime opportunity for us and we're looking forward to taking our chance. We think he's a good horse and Saturday will prove if he is or not.

Kevin Prendergast, trainer of Monaasib
I think he'll handle the ground okay. He needed the run at Leopardstown as he had been operated on for a wind problem so I expect him to leave that run behind him. He could not be in better form.

Hugo Palmer, trainer of The Rosstafarian
He's got plenty to find, but I think the ground will suit him. He has improved a lot since the Craven when things didn't go right for him. The track at the Curragh will suit better than Newmarket, and perhaps the very soft ground will level the playing field somewhat.