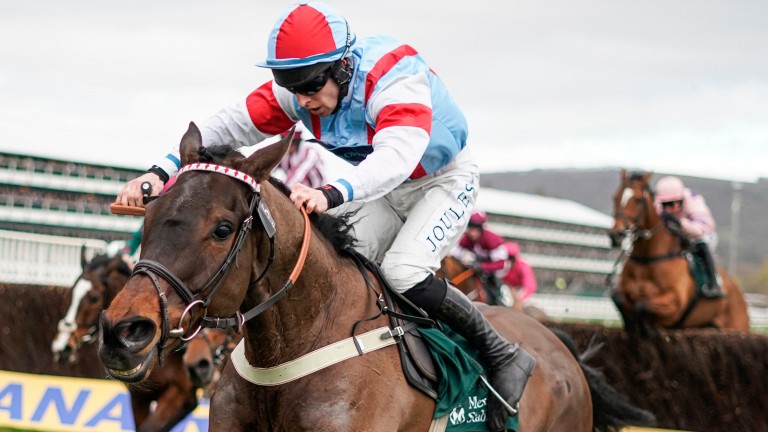 The market sees the Paddy Power Gold Cup as a clash between three second-season chasers, and it’s not difficult to argue Simply The Betts has the best record.

Winner of four of his five starts over fences, including the Plate at the Cheltenham Festival in which he defeated last year’s winner of this race Happy Diva by a length and a quarter, he has been carefully mapped out for this famous handicap by Harry Whittington.

“His preparation has gone to plan,” said the trainer. “Everything has gone very smoothly. He’s a dual course-and-distance winner in handicaps but has got to step up again off his rating of 157. He’s come back a stronger horse after his summer break, and I think he’s improved. His work has been really good."

Gavin Sheehan has been understandably keen to return from injury to partner Simply The Betts, who has proven ability to handle big-field Cheltenham handicaps.

“Simply The Betts has got the experience, and that can only be to his advantage,” Whittington added. “He’s already battle-hardened.”

Youth is no barrier to success in the Paddy Power Gold Cup. Cyfor Malta (1998) and Caid Du Berlais (2014) both landed the prize as five-year-olds, and Saint Sonnet will attempt to join them this year.

Both those previous winners started their careers in France, as did Saint Sonnet. After landing odds of 1-5 in a Catterick novice chase on his debut for Paul Nicholls in February, Saint Sonnet was stepped up in class for the Grade 1 Marsh Novices’ Chase at the Cheltenham Festival. Sent off 33-1, he finished a creditable seventh of 12 behind Samcro.

The gelding is thoroughly unexposed, and could be open to any amount of improvement off a mark of 147.

“We’ve had this race in mind for him since he came back in,” said Nicholls, who last won the Paddy Power with Caid Du Berlais. “He ran a nice race in the Marsh and strengthened up over the summer.”

Nicky Henderson has not enjoyed Paddy Power success since Fondmort’s victory under Mick Fitzgerald in 2003.

That didn’t stop punters piling into Seven Barrows representative Mister Fisher this week – Paddy Power, spokesman for the sponsors revealed that he had been supported "all week" – and the six-year-old looks sure to go well, as long as there is not too much rain overnight.

Always rated highly by Henderson, the six-year-old has landed two of his four starts over fences, including over the course and distance last December on soft ground, but Henderson is adamant Mister Fisher needs good ground to produce his best.

"He's in very good form," Henderson said. "I'm praying for a dry night. That's very important for him. He finished fourth in the Marsh on soft ground which was a fine run as he's much better on good.

"The ground at Cheltenham on Friday was genuinely good so let's hope the rain keeps away. We've always held him in the highest regard and he was electric when schooling two weeks ago."

Charlie Deutsch, rider of Aso
I'm very hopeful. I ride him out most days when I'm at Venetia's and he's in great form. He's quite good fresh and when he's well there aren't many who can go with him, he's a very good horse.

Nigel Twiston-Davies, trainer of Al Dancer
He’s a second-season novice and I think they have a bit of an advantage. He’s in really good form and I hope he’ll improve for the two and a half miles round Cheltenham. We think he’s very classy.

Kerry Lee, trainer of Happy Diva
It was a great day when she won the race last year. She seems as good as ever, and the forecast rain won’t bother her.

David Pipe, trainer of Siruh Du Lac
He’s a good work horse at home, and has some great form in the book. He had a wind op during the summer. He needs to step up again.

Paul Nicholls, trainer of Brelan D’As
He was only beaten a neck in the race last year and loves Cheltenham. He’s a lively outsider.

Alan King, trainer of Fidux
He's a grand little horse who's been in great form through the summer, climaxing in winning a decent race at Market Rasen, and he's run well at Cheltenham over hurdles. But this is a huge ask as he's been creeping up the handicap and is on a career-high chase mark.

Alex Dunn, trainer of Pinson Du Rheu
He is fresh and seems to enjoy his new surroundings. It's his English debut and we're pitching him in at the deep end.

Evan Williams, trainer of Coole Cody
It will be tough, but from a handicapping perspective I think we have a few pounds up our sleeve somewhere down the road. I love it when a horse has run well round Cheltenham before, and he’s won there over hurdles and finished second in a novice chase – that’s never a negative ahead of a big race like the Paddy Power.

FIRST PUBLISHED 6:00PM, NOV 13 2020
He’s come back a stronger horse after his summer break, and I think he’s improved

'There is no better feeling' - relentless Stag Horn delights Scholfield Promising Jpr One to be entered for the Betfair Hurdle after stylish success 'I've had this race in mind' - who has been laid out for the Lanzarote Hurdle? Training titans put records on line against Haldon Gold Cup king Eldorado Allen 'Wonderfully tough' Frodon to spearhead Paul Nicholls' bold Leopardstown raid Former Grade 1 winner Slate House returns to chasing off a career-low mark