Does Paul Nicholls have another summer star on his hands? 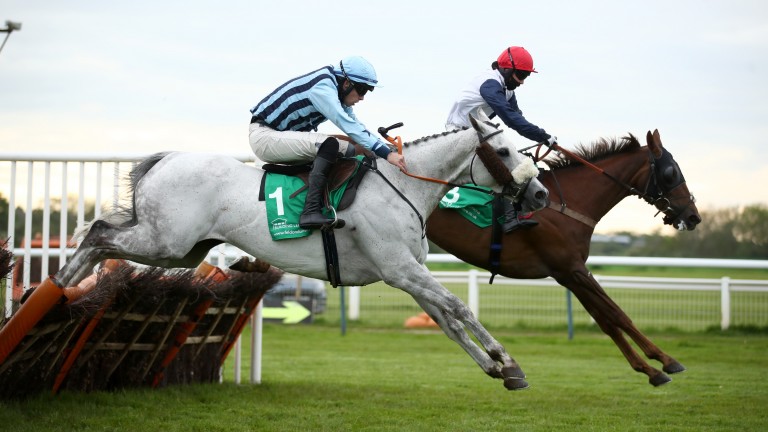 Kilmington Rose (red cap) will try to make it four wins in succession on Monday
Pool
1 of 1
By Graeme Rodway and Lewis Porteous 6:00PM, JUL 11 2021

Paul Nicholls has been more regular on the summer jumps scene in recent seasons than before and some of his summer stars have gone on to replicate their success in the winter.

Black Corton is one of the most famous examples. He earned plenty of experience in the summer of 2017 before going on to Grade 1 success later in the year. So, could Kilmington Rose do the same?

It would be a surprise if she were to develop into that class of horse, but she has made good progress over hurdles this summer and is now chasing her fourth win in less than two months. The return to handicap company means, however, she has more on her plate.

Kilmington Rose is 13lb higher than her first handicap success at Warwick in May and has yet to better a Racing Post Rating of 113. She will need to improve for a fourth victory.

Daryl Jacob partnered Breaking Waves for his win at Southwell last time and is at Newton Abbot for one ride on the Harry Whittington-trained runner, while Jonjo O’Neill is another at the course for just one mount on Young Wolf, who is back hurdling after a spell over fences.

Harry Fry saddles Black Mischief and Mr One More, both partnered by riders who claim. Kevin Brogan (claims 5lb) is booked for Mr One More, who is fitted with first-time cheekpieces, and Fry is 1-6 with runners in the aid for the first time since the start of last year.
Race analysis by Graeme Rodway

Jonjo O'Neill, trainer of Young Wolf
He's had a few little issues and not run for a while, so it's just nice to get him back on the track. He wants a bit further I'd imagine, but I want to get him started again and hopefully we can go on from there.

Harry Fry, trainer of Black Mischief and Mr One More
Both horses have had tendon injuries, which is why we've been cautious with them, but the ground looks like being fine here. Black Mischief ran a lovely race on his comeback after nearly two years off and hopefully he can build on that. I'd give him a very good chance. Mr One More is coming back to hurdles having not progressed over fences and we're looking to get some confidence back into him and something to work with.

Suzy Smith, trainer of Pilbara
Ideally, he wants a little bit further but a strongly run race around Newton Abbot will suit him and he wants a bit of give underfoot. It's competitive but he's got experience and back over hurdles we can probably force the issue a little bit more.

Paul Nicholls, trainer of Kilmington Rose
She's progressed quite a bit because she was fairly disappointing through the winter. She likes this time of year and I think she's got a fair mark for what she's achieved. The blinkers have definitely sharpened her and she got this trip well last time, but I wouldn't want to see too much more rain.
Reporting by Lewis Porteous

FIRST PUBLISHED 6:00PM, JUL 11 2021
Black Mischief ran a lovely race on his comeback after nearly two years off and hopefully he can build on that. I'd give him a very good chance