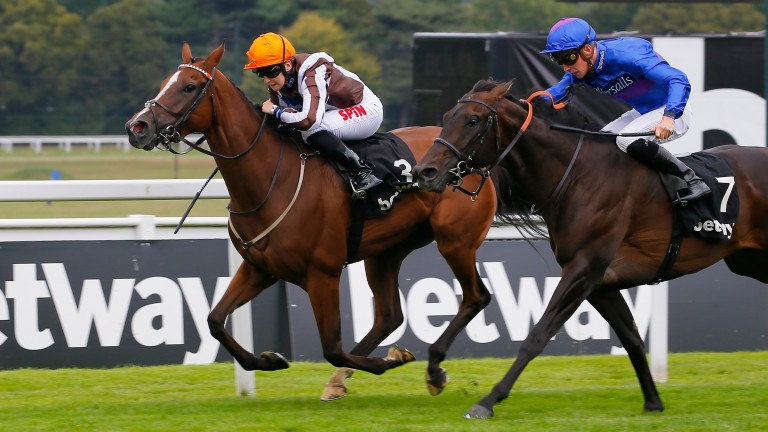 Migration (right): bids to build on his promising reappearance at Salisbury
Mark Cranham (racingpost.com/photos)
1 of 1
By Graeme Rodway and Sam Hendry UPDATED 8:21AM, JUL 27 2021

Turn back the clock a couple of years and Migration was one of the most promising three-year-old handicappers in Britain, but he has been plagued with problems since.

Migration missed all of last year and had been off the track for 641 days before his seasonal return at Salisbury last month, but that didn't stop punters backing him to resume his progress.

The David Menuisier-trained gelding was available at double-figure prices overnight but had been backed into 8-1 by the time the market opened on course and returned the 4-1 favourite.

The positive market vibes pointed to him having retained a large slice of his old ability and he proved that impression right in the race, despite failing to land the substantial gamble.

Migration was slowly away and never that well placed, but he kept on strongly to fare best of those from off the pace after finding trouble in running. He looks sure to improve for the run.

Backing horses who were beaten outright favourites when attempting to defy absences of more than 600 days on their previous start next time out has been profitable in recent years too. Since the start of 2011, following all such runners would have found 28 winners from 118 runners. That is a 24 per cent strike-rate and a £1 bet on each would have yielded a return of £18.25.

Mark Johnston's runners will feature heavily this week and he has saddled four winners of this race in the last ten years. He has had 22 runners in that time, though, and the market can help with regards to finding the right one. Two of his winners were favourite or co-favourite, and three of his four scorers were either the shortest or joint-shortest stable representative.

Johnston saddles three – last year's winner Maydanny, Sky Defender and Dream With Me, with Maydanny by far the shortest in the overnight market.
Race analysis by Graeme Rodway

David Menuisier is confident he has Migration, off the track for almost two years with injury, back to the form of his three-year-old season as the trainer targets glory in the opening race of the Qatar Goodwood Festival.

Migration, who will have the in-form William Buick on board for the first time, was a close-up fourth on his first run in 641 days at Salisbury last month.

Menuisier said: "Like all injured horses, you have to nurse them along and give them all the time they need. I was delighted to see how he ran at Salisbury because that confirmed he hasn't lost any ability during the two years he was off. He wasn't fully tuned up that day and has come on from it.

"He's going back to a mile and a quarter, which was his ideal trip two years ago, and they've had some rain which is good because I don't want to run him on ground that's too quick."

Ed Walker, trainer of Caradoc
He's come on for his Haydock comeback, so is ready to win if things go right. He should be all right on the ground.

Alastair Donald, racing manager for King Power Racing, owners of Johnny Drama
He should like the ground and has run well at Goodwood before. He can never be dismissed when in good form and it was a really good effort off a break in the John Smith's Cup.

Roger Fell, trainer of Cockalorum
The ground will really suit him. We've found the key to him this year as he seems to love front-running. He just keeps finding and finding – he's as hard as nails.

William Muir, joint-trainer of Data Protection
He's been in great form all season and I'm not worried about the rain that's fallen because he has won on soft before. He's won some nice races this year and he's going to win more of them. We'll probably try to ride him with a little more restraint this time.

2.25 Goodwood: can we trust the Coventry form? Graeme Rodway gives his view on Berkshire Shadow

3.35 Goodwood: 'They ride to beat him' – Stradivarius camp hoping to avoid difficult passage

FIRST PUBLISHED 6:00PM, JUL 26 2021
We've found the key to him this year as he seems to love front-running. He just keeps finding and finding – he's as hard as nails

'He deserved that' - Nayef Road out from shadow of Stradivarius with Listed win 'Why not the Guineas?' - Roger Fell dreaming big with Eldrickjones Art Power bids for another lucrative Irish raid in Group 3 Renaissance Stakes What is required to win the Cambridgeshire? Graeme Rodway runs the numbers Cheltenham hero Belfast Banter out to make class count in €80,000 feature King Vega and Murphy could prove value play after eyecatching Salisbury display