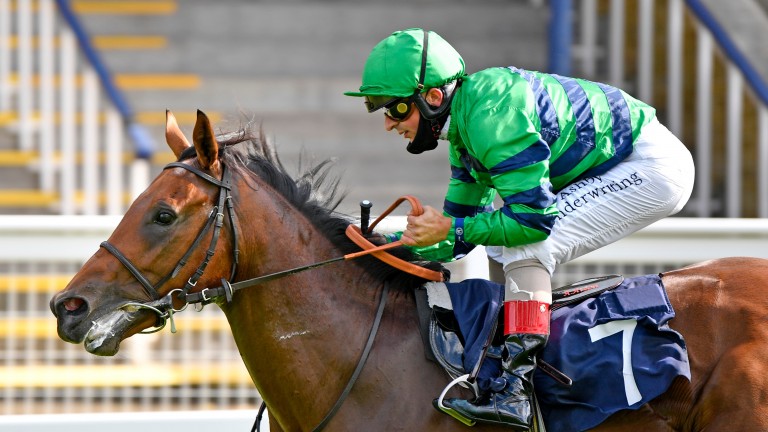 This 5f sprint might only have Listed status, but it is a Group race in all but name and Group 1 winners Margot Did (2011) and Battaash (2017) are on the recent roll of honour.

It is hard to know whether there is a Group 1 performer in this year's race, but there's a good chance overnight market leader Atalis Bay bumped into one when second at York last month.

Atalis Bay was having his first run in Listed company on that occasion and he was blown away by none other than Winter Power, who will head to Royal Ascot next week as one of the favourites for the King's Stand Stakes. So can Atalis Bay frank Winter Power's form?

The Marco Botti-trained three-year-old recorded a Racing Post Rating of 104 at York and that would have been good enough to have won the two of the last three runnings of this race. However, the average winning RPR for the contest in the last ten years is 108, so he needs to improve to hit that.

Steel Bull has equalled Atalis Bay's best RPR of 104, but he did it only once when successful in last year's Molecomb Stakes at Goodwood, and hasn't got any higher than 86 on his last two runs.

He beat only one home on his seasonal reappearance at Naas last month, raising questions over whether he has trained on, but he won't need to have improved over the winter to be competitive here. He just needs to return to his best juvenile form to give Atalis Bay a race.

Trainer Michael O'Callaghan fits a tonguestrap in a bid to spark Steel Bull back to form, but the Irish trainer is 0-11 with runners wearing the aid for the first time since the start of 2016.

There aren't many shrewder ownership syndicates in Britain than The Horse Watchers and their Warrior Brave has won three of his five starts since they purchased him from Ireland.

Silvestre de Sousa has been booked to ride the three-year-old and De Sousa has ridden 11 winners from 30 runners for The Horse Watchers. That's a 37 per cent strike-rate and a £1 bet on each would have yielded a profit of £23.41. That points to a big run from Warrior Brave.
Race analysis by Graeme Rodway

Can another sprint star emerge from the Scurry?

The Scurry Stakes has gained a growing reputation in recent years as a stepping stone to sprint stardom.

Most famously, Battaash's charge to the top of the sprinting ladder began when he landed this race four years ago.

Charlie Hills's stable star has since won 11 races over 5f since then, including four Group 1s, and will start a warm favourite in Royal Ascot's King's Stand Stakes on Tuesday.

Lazuli, who destroyed his rivals by three and a half lengths in the Scurry 12 months ago, took his form to another level when landing the Group 3 Palace House Stakes at Newmarket last month, and looks likely to make further progress this summer.

Time will tell if there is another potential star lurking in this year's Scurry, but perhaps the most likely of the nine runners to do so is the Marco Botti-trained three-year-old Atalis Boy, winner of four of his eight starts to date.

Botti said: "He's in good order. He ran well at York, and he'll get his trip and ground at Sandown.

"It looks a nice race for him. Andrea [Atzeni] knows the horse well. Atalis Boy is progressing into a useful sprinter. He's on his way up.

"He bumped into a nice filly at York, but quickened away from the rest of the field and finished five lengths clear of the third."

Atalis Boy seems sure to start favourite, and Botti added: "The Scurry looks a great opportunity. A low draw is usually an advantage so stall four isn't bad." 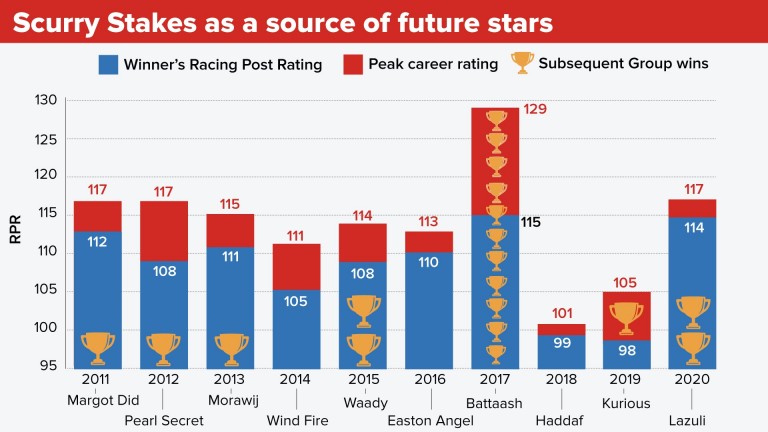 Mick Appleby, trainer of Warrior Brave
He's a nice horse who is going the right way. The Scurry is a much tougher race than the one he won at Goodwood last time and he'll have to improve again to win it, but I'm happy with his progress. Stall six shouldn't be a problem.

Stuart Williams, trainer of Dense Star
She's a nice filly. We've had her for six months now. She ran well on her first start for us in the mud at Chantilly and finished third at Chelmsford in a Listed fillies' race. Dense Star also ran quite a nice race on heavy ground at Haydock last month, and this much quicker ground will suit. I'm very much looking forward to seeing her run.

Tom Ward, trainer of Mishal Star
She's been in very good form this year. This will be the first time she's got her ground, and hopefully she can get some black type from a good draw in stall two.
Reporting by Richard Birch

FIRST PUBLISHED 6:00PM, JUN 11 2021
Silvestre de Sousa has been booked to ride the three-year-old and De Sousa has ridden 11 winners from 30 runners for The Horse Watchers

Ground the major concern as host of speedy juveniles gear up for Molecomb Back to normal? We road-test the new raceday experience Inspiral 16-1 joint-favourite for 1,000 Guineas after Listed success Dual winner Flying Pursuit one of four runners for Easterby in Dash Are we looking at a Group 1 horse in a handicap? International Stakes insight Horrific leg break forces Liam Keniry to put quest for milestone success on hold