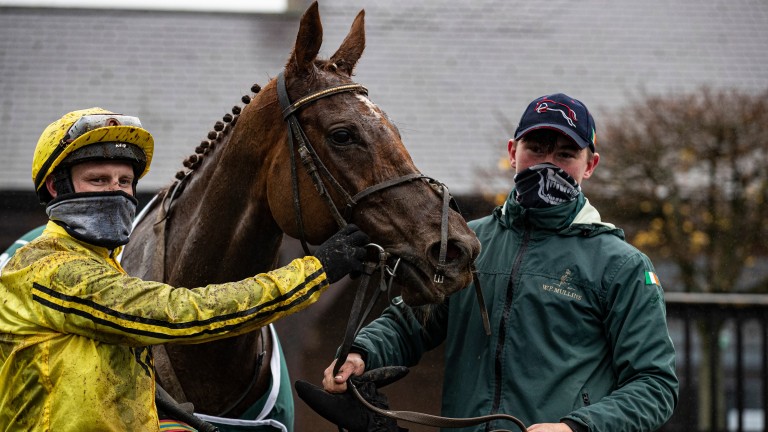 Buildmeupbuttercup: heads the weights for the Ladbrokes Hurdle
Patrick McCann (racingpost.com/photos)
1 of 1
By Mark Boylan UPDATED 9:13AM, FEB 6 2021

We may be living in unprecedented times but it is still the same old ultra-competitive Ladbrokes Hurdle and it could produce the same sort of result as recent years, with favourite Advanced Virgo out to provide Charles Byrnes with a fourth consecutive win in the race.

The Limerick trainer, who is set to have his appeal over a six-month suspension relating to the Viking Hoard case heard on Tuesday, landed this prize in back-to-back years with the JP McManus-trained Off You Go before Thosedaysaregone rewarded good market support to strike 12 months ago.

McManus has six in this and may well supply the biggest threats to Advanced Virgo in the shape of former course winner The Moyglass Flyer, who could have more to offer from a mark of 129, and Ciel De Neige, a regular in these big handicap hurdles who deserves to pick up a lucrative pot.

The latter is part of a potentially seven-strong squad for Willie Mullins, who saddles the top four in the handicap, including classy dual-purpose performers Buildmeupbuttercup and Stratum.

Talented novices Gabynako, Hes A Hardy Bloke and Eskylane have the potential to prove better than their respective marks if this big-field assignment isn't too demanding.

Boodles third Saint D'Oroux finished just behind the Paul O'Flynn-trained West Cork Wildway at Thurles seven weeks ago and it wouldn't be any surprise to see the pair in the thick of things at the business end.

Willie Mullins, trainer of Buildmeupbuttercup, Stratum, Blue Sari, Ciel De Neige, Tiger Tap Tap, Uradel and Hybery
Paul has picked Buildmeupbuttercup but she has it all to do with top weight. She’s in great form at home but this ground probably won’t be to her liking. Stratum is having his first run since a winter break. This trip is a bit short for him and he won’t like the ground. He’s probably best watched. Blue Sari has yet to come back to his Cheltenham bumper form and will find this tough with the weight he is set to carry. Ciel De Neige finally got his head in front at Limerick over Christmas. He’s fit and well and this trip will suit. Tiger Tap Tap ran better than his finishing position would suggest here at Christmas but he might prefer better ground. Uradel is back after a long break and will find this tough. However, he has a nice weight, which will be reduced further by Aubrey McMahon's 7lb claim. Hybery is only third reserve but has a feather weight and could be great each-way value if he gets a run.

Joseph O'Brien, trainer of The Moyglass Flyer and Front View
The Moyglass Flyer has run well on all of his starts so far. He's got a nice low weight so we're hoping he can run well. Front View has been running over fences and we've decided to run him back over hurdles here. The prize-money is obviously very good and we'll be keeping our options open with going back over fences again later in the season.

Pat Fahy, trainer of Drop The Anchor
He got stopped in his tracks at the wrong time at Fairyhouse. He hasn't had luck on his side the last twice so hopefully things go better for him now. He's gradually improving so fingers crossed.

Gavin Cromwell, trainer of Gabynako
It's a bit of an experiment coming back to two miles with him. He travels well in his races, but he also stays well. We might try something different with him and take our time. It probably didn't help his cause for this when he got 6lb for finishing third in a Grade 1 last time but hopefully his mark might still be okay.

Paul O'Flynn, trainer of West Cork Wildway
We think he's improved since his win at Thurles. If he was to run well here then we could think about a Cheltenham Festival handicap. The owners are very excited to run in a race like this. They bought him as a three-year-old [for €10,000] and sent him to me. They've had offers to sell but held on to him, they wanted to have a nice horse.

FIRST PUBLISHED 6:00PM, FEB 5 2021
It's a bit of an experiment coming back to two miles with him. He travels well in his races, but he also stays well

Where was Dettori? Where were the Brits? Irish Champions Weekend felt too Irish Forgo the Flying Five in order to watch Snowfall? It can't ever happen again... 'We have to try something' - McCullagh calls for false rail at Leopardstown Over €17 million wagered as Ireland's first Tote World Pool event proves popular Five-time Group 1 winner St Mark's Basilica holds on in front once again Harrington makes plans for Irish Champions Weekend stars after 'amazing' weekend