Will go-to claiming rider Jordan Gainford strike another blow for the Irish? 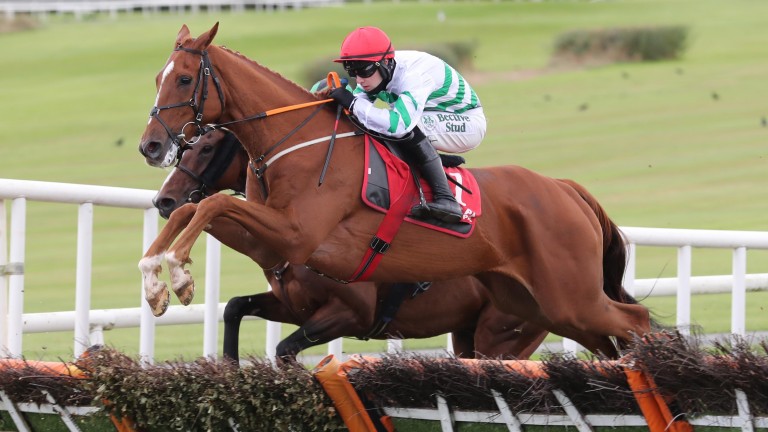 Tullybeg: 10lb hike in the ratings as he makes his first start in Britain on Saturday
Caroline Norris
1 of 1
By Graeme Rodway and Richard Birch UPDATED 10:10AM, OCT 23 2021

Jordan Gainford was the go-to claiming rider for Irish trainers at the Festival in March and his victory on The Shunter in the Paddy Power Plate showcased his abundant talent. Gainford rode four at Sligo on Friday and his presence at Cheltenham on Saturday could be significant.

Gainford rode two winners from 11 runners in Britain for Denise Foster when she was in charge at Cullentra House and the jockey's first two mounts across the Irish Sea officially under Elliott's name resulted in a winner and a third. He has three rides for the trainer on Saturday and maybe his best chance comes on Tullybeg in this staying handicap hurdle.

After the mauling in March, the British handicappers are under pressure to get it right with Irish-trained runners and they have given Tullybeg a British mark of 140. That is 10lb higher than the Irish mark from which he won at Gowran Park in October, so will that be enough? 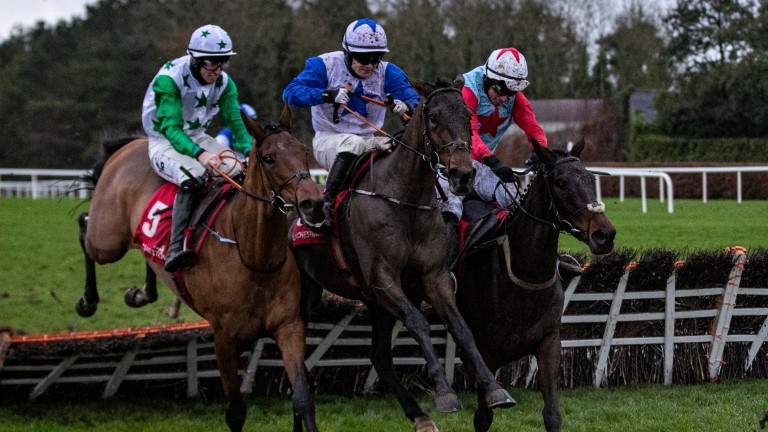 Born Patriot (centre) has work to do to reverse places with Tullybeg
Patrick McCann (racingpost.com/photos)

Born Patriot finished fourth behind Tullybeg when he won at Navan last month and the Peter Fahey-trained runner competes off 6lb higher than his Irish mark. He was beaten nearly ten lengths by Tullybeg in that Navan race though, and will need to improve to reverse places.

Denis Hogan saddles the other Irish raider Macgiloney and the trainer has been profitable to follow blind in staying hurdles in recent years. Since the start of 2016, a £1 bet on all Hogan's runners in three-mile-plus hurdles would have yielded a profit of £26.08 (15-112; 13 per cent).

Haul Away might be the best of the British-trained runners. He may have beaten only five rivals over fences at Warwick last month but the runner-up Quartz Du Rheu won at Carlisle last week and Haul Away is a better hurdler, although is racing off a career-high mark of 136.
Race analysis by Graeme Rodway

Nicky Henderson, trainer of Haul Away
He's an admirable horse who has won four of his last six during quite a busy summer. We'll try to get him qualified for the Pertemps Final and then give him a holiday before coming back in the spring.

Rebecca Curtis, trainer of Geordie Des Champs
We've switched him back to hurdles. He jumps okay but I wouldn't call him a natural chaser. He's on the same mark over hurdles and I think he's better off going over the smaller ones. He'll like the ground and gets the trip so he should go well.

Robert Stephens, trainer of Push The Tempo
We did his wind before his last start at Worcester, which he won. The step up in trip suited him that day, and he's only gone up 2lb. It will be interesting to see how he copes with Cheltenham – he's mainly raced on flat tracks.

Alastair Ralph, trainer of Butler's Brief
He enjoyed a good summer, and Nick [Scholfield] built up a good partnership with him. The handicapper obviously put him up for those three wins but he's an improving young horse and we haven't got to the bottom of him yet. He's still going the right way.

Oliver Sherwood, trainer of Jersey Wonder
He was a good Flat horse and should still prove capable of being competitive off his current hurdles mark. I'd like to get him qualified for the final of this series.
Reporting by Richard Birch

Ownership experience with classy Joseph O'Brien-trained colt in charity auction 'It was some experience' - O'Keeffe delight at partnering Bob Olinger to victory 'He is part of his story - it's a tragedy he won't be able to ride him' The Buzz horse: is the Cesarewitch winner able to follow up in Ascot Grade 2? 'We all want some rain' - jumps season in danger of being derailed by drought Shishkin still in but Tingle Creek isn't always essential for Henderson