Next up: key quotes as the sprint crown is up for grabs at Ascot 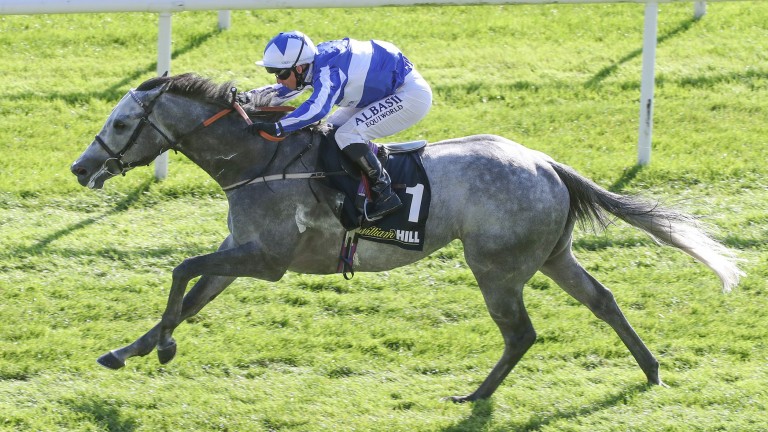 Art Power: one of two sprinters to have achieved an RPR of 120
Caroline Norris (racingpost.com/photos)
1 of 1
By Tom Collins and David Milnes UPDATED 1:26PM, OCT 16 2021

Early retirement for ante-post favourite Starman coupled with the absence of King's Stand star Oxted means the stage is set for a new sprinting champion. A maximum field of 20 runners will assemble at the 6f start for the first time since 2015 in undeniably the best betting heat of the day.

The magic number is 120. A performance worthy of that Racing Post Rating has been good enough to win nine of the last ten runnings of the Champions Sprint Stakes. The exception is Twilight Son, who ran to the required mark in 2015 but bumped into Muhaarar, the best winner of this race since its inauguration. So how many of these contenders are capable of achieving that landmark rating?

On the evidence to date, the answer is just two. Art Power hit the mark with a career-best display in the Group 3 Renaissance Stakes at the Curragh last month, while Rohaan's last-to-first victory in the Wokingham saw him take the leap up to Group 1 standard. The pair have contrasting run styles but have both developed a love affair for Ascot, boasting form figures of 143 (Art Power) and 11 (Rohaan) respectively.

But it would be foolish to believe this is just a two-horse race on that evidence. First, Art Power and Rohaan have only performed to the level required on one occasion each. Second, you cannot rule out further improvement from any of their rivals.

Lightly raced three-year-olds Creative Force and Minzaal must sit at the top of the likely progression shortlist. The former achieved an RPR of 116 when fifth behind Starman in the July Cup, but was perhaps seen to best effect in the Jersey and Lennox Stakes over 7f.

Minzaal boasts intriguing three-year-old form and ran creditably on his sole start against his elders in the Rous Stakes this month. Quicker ground will help his cause.

Drying conditions certainly won't be ideal for last year's winner, Glen Shiel, whose top three performances have come on soft ground. First-time blinkers are fitted in the hope of sharpening up the seven-year-old. Brando, two years his senior, will make a sixth bid at Champions Sprint glory; his form figures in this race stand at 36442.

Fillies Happy Romance and Vadream boast a high level of consistency and are in receipt of the 4lb sex allowance, while Dragon Symbol looks to finally break through in a Group race after six creditable efforts this summer. He only began his career in March but has already run ten times.
Race analysis by Tom Collins

David Egan has just two rides on the Champions Day card and warms up for the Champion Stakes favourite, in which he partners favourite Mishriff, on Vadream.

The former champion apprentice has had just three rides for trainer Charlie Fellowes, winning on two of them including when steering Vadream to victory in the Group 3 Bengough Stakes over course and distance a fortnight ago.

Egan said: "It's an open-looking race and a big call by the owners to supplement her into the race. I only got the call-up to ride the filly at Ascot as Jamie Spencer had to ride at Newmarket that day but she handled the track and ease in the ground well. This is the next step up but she's a progressive type."

Fellowes believes the sprint is wide open following the retirement of July Cup winner Starman as he targets his first Group 1 success.

He said: "I feel like the race has been blown wide open with Starman not running. I think you can pick holes in every other horse in the race."

Alastair Donald, racing manager to King Power Racing, owners of Art Power and Happy Power
I just hope there is no draw bias for Art Power this time – he always seems to get one or 20 and be on the wrong part of the course. I don't think there will be. If he's ridden with more restraint like at the Curragh last time I think he's the one to beat. Happy Power ran very well in the Diamond Jubilee to finish fourth, one place behind Art Power. He likes the track. Seven furlongs is his ideal trip, but it's a stiff six and he should run well at a good price.

David O'Meara, trainer of Azano
He had a good run at Redcar last time but is dropped in trip and upped in grade so he's got a big task.

Archie Watson, trainer of Glen Shiel and Dragon Symbol
Glen Shiel ran fantastic races in the Diamond Jubilee and in the July Cup, and then it was funny ground at Deauville, where he was in the middle of the track. I'm delighted with the way he is and I'll put on some headgear, just to sharpen him up. Dragon Symbol hasn't run a bad race all year and stepping back up to six furlongs will suit him grand. On his Royal Ascot and July Cup form in particular he should be bang there, and he deserves to win one of these.

Charlie Appleby, trainer of Creative Force
He's now learning how to sprint at the top level. He won the Jersey over seven furlongs at Royal Ascot, but then dropped back to six for the July Cup, in which he finished a good fifth. I feel he has learned a lot in his runs over sprint distances and he should enjoy the easy surface.

Ralph Beckett, trainer of Kinross
He got a bit further back than we would have liked in the Prix de la Foret but he finished off well. I've always wanted to run him over a stiff six. There is only one way to find out whether that's a good idea or not.

Owen Burrows, trainer of Minzaal
It was his first run for over a year when he ran second at the track a fortnight ago and I was very pleased with it. You worry a bit about the bounce factor, but he's showing all the right signs at home. The track is slowly drying. He got through very soft ground last time but he's proved that he goes on better ground. When he won the Gimcrack it was the easy side of good and similar in the Middle Park and he was third in that.

David Evans, trainer of Rohaan
He does everything so easily. Nothing is too much effort for him. He's half asleep most of the time, but he's got such a turn of foot, so long as he's close enough to use it. He's really well and if he's in one piece and luck goes with him I don't think there's anything in the race to beat him.

Joseph O'Brien, trainer of Thunder Moon
We're happy with his draw and hopefully the ground continues to dry out. On his best form he'd have a chance.

Richard Hannon, trainer of Happy Romance
She ran a terrific race to be fourth in the Haydock Sprint Cup last time and as the ground continues to dry out there's no reason why she can't be on the premises again.
Reporting by David Milnes

2.35 Ascot: 'She'll be difficult to beat' – can Snowfall bounce back to her best at Ascot?

FIRST PUBLISHED 6:00PM, OCT 15 2021
On his Royal Ascot and July Cup form in particular he should be bang there, and he deserves to win one of these