Next up: key quotes as Mishriff and Adayar head a stunning Champion Stakes 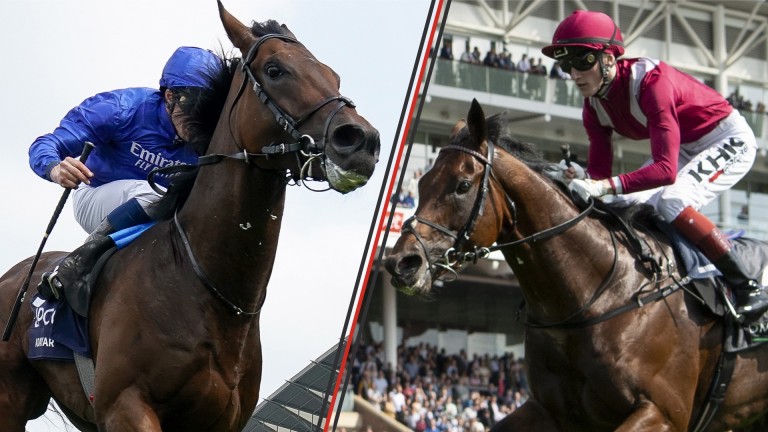 How much will a hard race less than a fortnight ago on heavy ground at Longchamp impact on Derby winner Adayar's potential level of performance? That's the burning question ahead of his absorbing Champion Stakes rematch with Mishriff.

Charlie Appleby, who knows Adayar best, is adamant the colt's Arc fourth has not drained him as much as many would fear. Champions Nijinsky (1970) and Montjeu (2000) both failed to win this race after suffering defeat in the Arc, but Adayar delighted connections in a Wednesday gallop and confidence is high.

"It was an easy piece of work to confirm his wellbeing and he did it so well," Appleby said. "We're all looking forward to the rematch with Mishriff, particularly over this trip.

"Adayar beat Mishriff comfortably in the King George, and then Mishriff came out and dominated the Juddmonte International at York, winning by six lengths over the distance of the Champion Stakes.

"We're happy to meet him over the mile and a quarter, which is the trip where we believe Adayar's potential lies at four next year."

Adayar's autumn campaign has been lighter than Appleby planned as he missed his trial for the Arc after suffering a minor training setback.

Appleby added: "All the signs after the Arc were positive. They went steady for the first half of the race which is why William [Buick] allowed him to take it up. They only really raced for the last mile.

"He's been beaten just under four lengths after kicking for home at the top of the straight. We've run all the usual veterinary checks on him this week and he's in great shape."

Adayar will attempt to emulate his sire Frankel, who signed off his extraordinary career in the 2012 Champion Stakes when recording a 14th straight success.

A huge crowd – swelled by many first-time racegoers who wished to witness the wonder of Frankel for themselves – descended on Ascot that day.

Adayar, and his rider Buick’s thrilling battle with Oisin Murphy for the jockeys' championship, could provide the biggest story since nine years later. 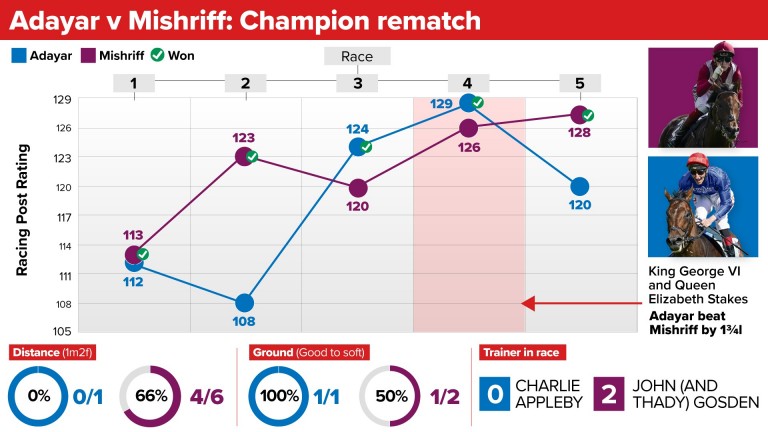 Ground no problem for 'fresh' Mishriff

While the Champion Stakes has been more of an afterthought for his Ascot conqueror Adayar, the Gosden team have meticulously laid out Mishriff for the race since his Juddmonte International victory in mid-August.

Although second-favourite Love disappointed in finishing only third on the Knavesmire, there is little doubt that represented a career-best effort from the four-year-old, and there's a strong likelihood Adayar will need to be at the very top of his game to confirm King George superiority over this shorter trip.

Three-year-olds are always aided in the King George by getting significant weight from the older horses, something joint-trainer John Gosden – who sent out three-year-olds Nathaniel, Taghrooda and Enable to win Ascot's midsummer showpiece – pointed out after Mishriff's defeat by the year-younger Adayar in July.

Mishriff failed by a length and three-quarters to give Adayar 11lb that day, and the pair will renew rivalry on level weights this time.

Gosden said: "It looks a fabulous race and we've targeted this ever since he won the Juddmonte International at York in August.

"He's trained nicely for the race and we're very much looking forward to it. He didn't handle that deep, heavy, specialist ground last year when he finished down the field, but soft ground is fine for him. He's going in fresh, but he was fresh when he won the Saudi Cup."

Going may have turned against Addeybb

There may be significant give in the Ascot ground, but connections of Addeybb, who defends the title he won in thoroughly decisive style 12 months ago, would have welcomed one or two downpours this week.

Quite simply, Addeybb can't have it soft enough, even though he does possess Group 1-winning form on good ground. That came in Australia when Addeybb clinched the Queen Elizabeth Stakes in April for a second consecutive year under Tom Marquand.

The globetrotting seven-year-old, winner of 12 of his 23 career starts, has been very lightly campaigned since beating Skalleti by two and a quarter lengths on a soft surface last October.

He has been seen only once in Britain this year when finishing second to St Mark's Basilica in Sandown's Eclipse, a neck ahead of Mishriff.

Trainer William Haggas said: "I wish it was softer. Not only would very soft ground help him, it would also slow the others down. He's bound to run a good race, though. He'll be in there fighting – he always does."

This will be the fourth consecutive year Addeybb, the subject of good market support this week, has participated in an Ascot Group 1 on Champions Day.

He was unplaced behind Roaring Lion in the 2018 Queen Elizabeth II Stakes prior to finishing runner-up to Magical in the 2019 Champion Stakes.

Improving Dubai Honour in the mix

Dubai Honour's rate of progress over the last few months has been so startling that the bookmakers quote him at single-figure odds in his first Group 1 which contains the 2021 Derby and Juddmonte International winners.

The three-year-old, beaten off a mark of 91 in the Britannia Stakes at Ascot in mid-June, has thrived for the step up to 1m2f, and is unbeaten in three subsequent starts, most recently in the Group 2 Prix Dollar at Longchamp on Arc weekend.

Although he had to battle hard under James Doyle to assert his superiority that day, Dubai Honour, who signed off his juvenile campaign with a defeat in a York nursery, was firmly in command at the finish.

It was the latest in a succession of career-bests, and the gelding fully deserves his place in Group 1 company. Once a three-year-old starts improving during the second part of the season, it's never wise to put a ceiling on what it can achieve, and Dubai Honour comes firmly into that category.

Trainer William Haggas, who has an abundance of exciting hopes on Champions Day, said: "Dubai Honour has done very well, and improved a lot in recent weeks. I'm very pleased with him.

"The big question, of course, is where's his ceiling? At this stage we don't know, and that's what makes him so exciting. What we do know is that he's a smart horse. It will be a very tough race for him, and we'll find out a lot."

Haggas added: "It's a big day for Dubai Honour, and it's a big day for us. Sometimes we don't have nine runners in an entire week; now we've got nine horses on the best Champions Day card I can remember."

William Haggas, trainer of Al Aasy
We've had this in mind for some time for him, but didn't anticipate such a competitive contest. It's a hell of a race, and part of the best card I think we've ever had on Champions Day.

Alastair Donald, racing manager to King Power Racing, owners of Foxes Tales
He's very progressive, and looks too big a price for a horse who finished only a head behind Dubai Honour when attempting to give him 9lb at Newmarket in July. He's very lazy at home, and he's been wearing blinkers to sharpen him. It's a very hot race, but I could see him running into a place.

4.30 Ascot: which of the Gosden pair might prevail in a competitive running of the Balmoral?

FIRST PUBLISHED 6:00PM, OCT 15 2021
We're happy to meet him over the mile and a quarter, which is the trip where we believe Adayar's potential lies at four next year