Previews Race of the Day

2.45 Market Rasen: the one race you cannot afford to miss on Tuesday

Balgemmois (right): about to pass Two Hoots at Market Rasen last month on his way to victory
Martin Lynch
1 of 1
By David Milnes UPDATED 12:12PM, FEB 4 2020

The tempo of races round Market Rasen can often get horses out of their comfort zone relatively early on, so it's a track where course form should often be strongly factored into calculations.

Last-time-out Market Rasen winner Balgemmois obviously scores highly in that respect, and there is the possibility of further improvement on that performance as he steps up to three miles.

That race did rather fall apart at the end of the back straight, though, and I'm not sure the victory merited a 7lb rise.

Cuban Pete looked a horse to follow after gaining back-to-back Hereford wins – one over hurdles, one over fences – but subsequent efforts at Lingfield and Kelso have been disappointing. He lacks course experience.

That certainly does not apply to Cougar's Gold, who has twice been to Market Rasen, on the first occasion landing a summer bumper when odds-on favourite.

He is not one to place maximum faith in, but his handicap mark is beginning to drop to a level at which he ought to be competitive.

This is a race in which a perceived shock result would not surprise, and perhaps 12-year-old course-and-distance winner Ultimatum Du Roy could roll back the years off an attractive mark.
Analysis by Richard Birch

Venetia Williams, trainer of Cuban Pete, is 0-14 with her runners here over the last two seasons. Ultimatum Du Roy is the senior runner in the seven-strong line-up, which is no barrier to success as it was won by another 12-year-old in Dartford Warbler a year ago. 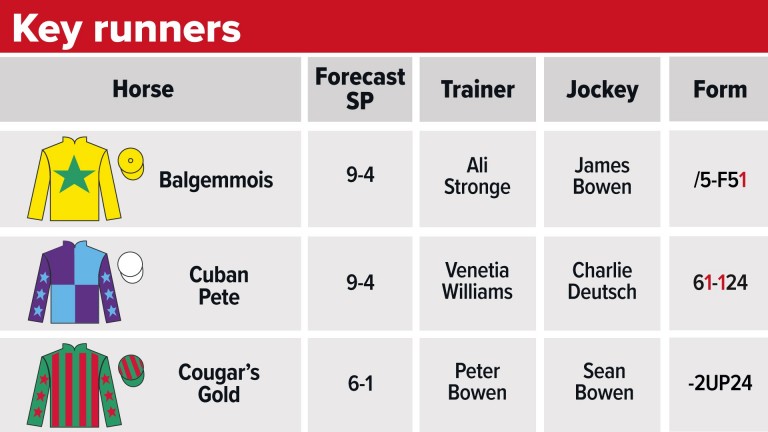 Tom George, trainer of Smuggler's Blues
He's entitled to have come on for his comeback run and is in good form at home. Hopefully, the ground will have dried out a bit for him as he doesn't want it too soft.

Tom Clover, trainer of Holbrook Park
He's the only jumper we have, but he's down to a dangerous mark and could go close if he fancies it. He managed to get round at Fakenham last time but is better going right-handed.

Sam Stronge, assistant to Ali Stronge, trainer of Balgemmois
He needed his first run back at Hereford and showed he retained his ability when scoring over just short of this trip at this track last time. He needed every yard that day, but it's just a question of if this race comes a bit soon for him.

Peter Bowen, trainer of Cougar's Gold
He's not particularly well handicapped but will probably run his usual race and make the frame, although he is good enough to win it on his day.

Alex Hales, trainer of Ultimatum Du Roy
He loves it at Market Rasen and was running a nice race until he made a mistake at Warwick last time and this looks an easier race. He would have place chances.

Jack Quinlan, rider of Dontminddboys
A lot of Robin Dickin's have been improving for the run and he would have a shout if it were a stiffer track. He'll be doing his best work at the finish, I would imagine.

FIRST PUBLISHED 6:00PM, FEB 3 2020
He's the only jumper we have but he's down to a dangerous mark and could go close if he fancies it