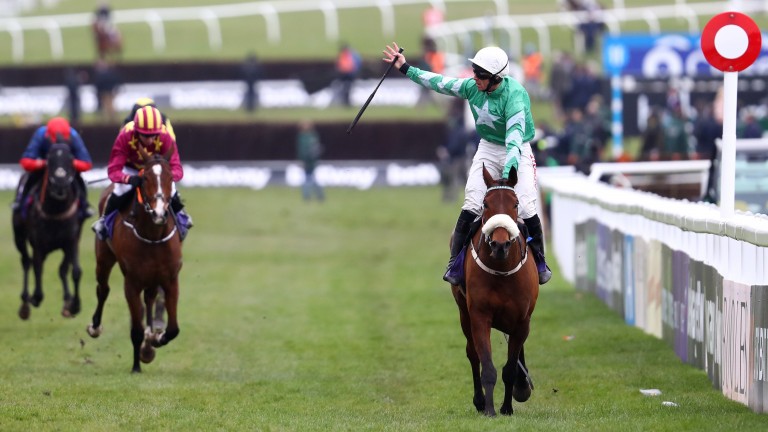 Presenting Percy has a '50-50 chance' of running in Saturday’s Grade 3 Bobbyjo Chase at Fairyhouse, according to owner Philip Reynolds, before a tilt at the Magners Cheltenham Gold Cup.

Presenting Percy missed a number of intended engagements because of unsuitable ground, before reappearing and winning the Galmoy Hurdle at Gowran Park last month.

Connections opted against running the Gold Cup favourite back at Gowran for the Red Mills Chase last week, again due to unsuitable ground, but Presenting Percy may yet get his eye in over a fence in Saturday’s contest, ground permitting.

Reynolds said: "Presenting Percy is in great form. I saw him at the weekend and he's absolutely terrific.

"We could have run him last weekend in the Red Mills Chase and we could run him this weekend in the Bobbyjo – every bit of rain which we're getting at the moment helps.

"The intention after winning the Galmoy was to run in the Red Mills as that was the same route he took last year before [winning] the RSA.

"Pat [Kelly] had him in as good a shape as he wanted him to be. I don't want to say anything negative about the ground, but they were going to be jumping out of ground used two weeks earlier, and the ground at Gowran was as bad as we've had in Ireland all year.

"As we've sat and sat all year waiting to get him out, we didn't want to risk him."

Reynolds added: "Pat and I aren't going to have many opportunities to win a Gold Cup, so we just have to be extra careful.

"We're promised rain this week, so we're going to keep the race on Saturday under review. There are 11 entries and it would be nice to get him out again in a small field to try to minimise as much risk as possible.

Don't miss the Racing Post Cheltenham Festival Guide 2019 – 208 pages featuring Paul Kealy's race-by-race guide, Racing Post Ratings, top tipsters, bookmakers Q&A, trainer analysis and much more. Order now at racingpost.com/shop or call 01933 304858 FIRST PUBLISHED 6:54PM, FEB 19 2019
Pat and I are not going to have many opportunities to win a Gold Cup, so we just had to be extra careful with the horse