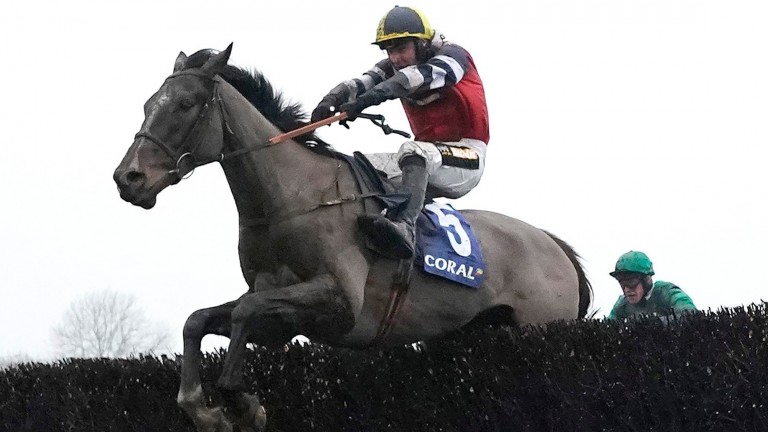 Potters Corner: Tudor was on board for his Grand National win
Alan Crowhurst / Getty Images
1 of 1
By David Carr UPDATED 3:15PM, MAR 16 2021

Christian Williams has announced that Potters Corner has been ruled out of Wednesday's Glenfarclas Cross Country Chase but remains hopeful the 11-year-old will make next month's Randox Grand National.

The 2019 Welsh Grand National winner was a general 6-1 shot for the race in a market headed by Easysland, who is now an odds-on favourite at 4-5 generally.

Williams said: "He had a little over-reach a day or two ago. We were hoping it would be nothing but there was a slight inflammation yesterday and there's a little bit more - we're going to have to give him a routine course of antibiotics.

Regrettably Potters Corner is slightly lame this morning following his last routine canter yesterday and therefore he WILL NOT run in tomorrow’s Glenfarclass Cross Country @CheltenhamRaces It’s incredibly disappointing news for the yard, staff and his owners.

"He was flying, that’s the worst thing. The yard seems to have been in a good place over the last few weeks, so it’s hard to take. I just feel sorry for the owners, but you’ve got to do what’s best for the horse and I had to make a decision quite quickly this morning."

"We couldn't get away with it, everything needs to be right and the horse has to come first. We're all disappointed but I'd be surprised if it isn't still all systems go for the Grand National."

Potters Corner is a general 25-1 shot for the Grand National at Aintree, and Williams added: "The Grand National has been his number one target for the last 18 months or so. After last year’s Welsh National we’ve targeted this race, so I’m trying to give him the ideal prep for it.

"It’s been a bit of a roller-coaster, but we feel the horse is in a very good place and I can't see why he wouldn’t have done any damage to his Grand National hopes."

Supreme: will the cream rise to the top in smallest field in modern history?

Arkle: dangers await but here's why unbeaten Shishkin should have all bases covered

Champion Hurdle: pure theatre guaranteed as Goshen goes in search of redemption for the Moores

Mares' Hurdle: can Concertista take her place among the greats with victory in vintage running?

FIRST PUBLISHED 9:56AM, MAR 16 2021
We're all disappointed but I'd be surprised if it isn't still all systems go for the Grand National