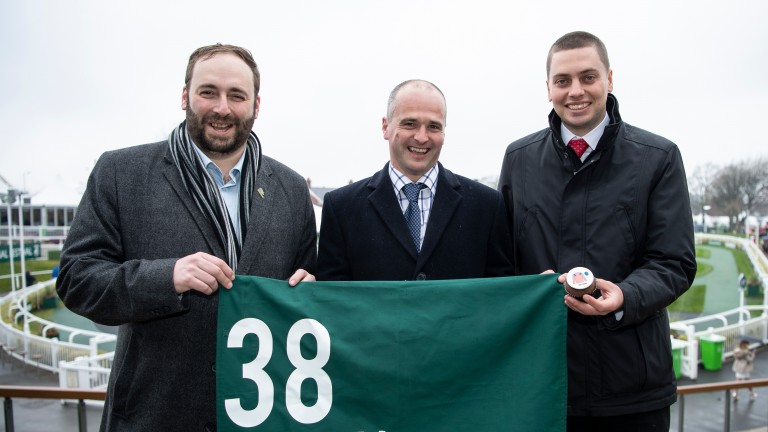 He was aiming to win a book token but instead Racing Post reader Andrew George will feature in a chapter of this year's Randox Health Grand National story as part-owner of big-race runner Final Nudge.

Of numerous daily prizes offered in a competition to win a five per cent share for the rest of the season in the David Dennis-trained jumper, George, 35, had his eye on a voucher he could spend on the new Cue Card book.

But by entering on multiple days his name went into the hat for the top prize so George, a data officer from Kendal in Cumbria, will spend Saturday in the Aintree parade ring watching his own horse take part in the world-famous race.

"It's absolutely unbelievable," he said. "I would have been happy to get a Racing Post shop voucher because I was looking out for the new Cue Card book. I thought it would be brilliant if I got that so I kept entering it every day."

George has always been a fan of horsepower but until five years ago that only involved motorbikes. He was converted to horseracing by his brother Daniel, and for the past five years the pair have been regulars at Aintree and other big meetings, but until now not on Grand National day.

"My brother has been a fan since he was about 12 and I was always into motorcycle racing," said George. "Then my brother asked me to come to the Grand National meeting one year and after I went along I enjoyed it so much I was hooked. I'm a massive animal lover as well.

"I've been at Aintree on the Thursday and Friday for the last five years but I had always wanted to experience the Grand National. We were going to do it this year but we left it too late to get tickets. I like to be around the parade ring so we can see the horses close up but there were none available in that area. We were really disappointed to miss out and then this happened."

Final Nudge has National credentials. He finished third in this season's Welsh National and he loves soft ground, but was well beaten in the Kim Muir at Cheltenham. George believes he could outrun his 50-1 odds.

"I think this year's National is as wide-open as it's ever been," he said. "I hope it doesn't dry up too much. I was looking at all the ratings and I think this year it's going to be so hard to pick the winner. Final Nudge definitely stands a chance of placing."

Dennis is similarly hopeful for his first National runner, who will run in the colours of Corbett Stud. "It's very open this year," he said. "His last two runs haven't been spectacular but I deliberately didn't run him in the Midlands National in case he got in at Aintree, which was why he went for the Kim Muir.

"He travelled very well at Cheltenham but was a bit onepaced from three out. It was a satisfactory run, it wasn't disappointing."

George said: "This is something you dream of but you never think it will happen. It's going to be a once-in-a-lifetime experience that's for sure."

Read The Daily Briefing from 8.30am daily on racingpost.com with all the day's latest going, weather, market moves and non-runner news

FIRST PUBLISHED 2:15PM, APR 13 2018
It's absolutely unbelievable. I would have been happy to get a Racing Post shop voucher because I was looking out for the new Cue Card book